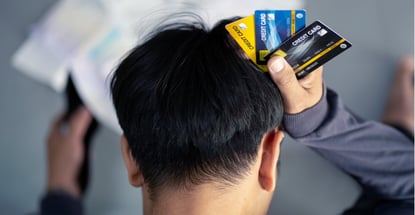 Do you want to be average? Maybe yes. Maybe no.

When it comes to credit card debt, being average gives you an idea of how much other people owe. That amount could be comfortable for you, or it could be more or less than you feel you can manage with your income and financial situation.

Regardless of whether average is right for you, it gives you a benchmark against which to measure yourself. Is your credit card debt similar to everyone else’s? Or do you owe a lot more or less than other people who are like you in terms of age, state, income, or FICO credit score?

Read on to find out.

Total Credit Card Debt in the US

The total credit card debt among US consumers rose to $887 billion in the second quarter of 2022, according to data from the Federal Reserve Bank of New York. Credit card balances saw their largest year-over-year percentage increase in more than two decades.

The good news is that delinquency rates are still very low compared with historical delinquencies. But prepare for those balances to increase even more as we approach the holiday shopping season.

Though average and total balances declined, US consumers continued to open millions of new card accounts. The total number of cards in the US grew to more than 494 million in 2021, up from almost 480 million in 2020 and about 465 million in 2019.

Among all the demographics, Generation X — defined in Experian’s report as aged 41 to 56 — had the largest average card debt balances in the third quarter of 2021. Those consumers had an average balance of $7,070 in that period.

Lower balances and tighter credit limits produced lower utilization ratios, which dropped from 29% in 2019 to 25% in 2020 and 2021. But those figures varied widely by age.

Alaska residents led the US with the highest average credit card debt — $6,787 per resident — in the third quarter of 2022, Experian reported.

Connecticut and New Jersey came in second and a very close third with an average credit card debt of $6,516 and $6,428 per resident, respectively.

Eight other states with average card debt exceeding or closely approaching $6,000 per resident were:

People who earn more income tend to have more credit card debt, according to 2019 data from the Federal Reserve Survey of Consumer Finances.

How to Lower Your Credit Card Debt

Some people are comfortable with the amount of debt they have, but others want to lower their debt. If you’re in that group, you can use two main strategies to get started.

The snowball strategy starts with paying off your smallest balance first, then your next smallest balance, and so on until you pay off your last and largest debt. This strategy may cost you more as your interest expense may be higher, but it can help you stay motivated.

You can also alternate between the two strategies or combine them in any way that works well for you.

Paying down your debt may make you below average — in a good way.

What is the Average Household Card Debt?

7 Credit Card Habits to Stay Out of Debt