Let’s talk about credit card debt statistics. March of 2018 saw the sixth rise of the federal funds rate — and, thus, the U.S. Prime Rate — since 2015, a marker of the continued growth of the U.S. economy since its lows in the late 2000s.

But while economists may hail the increase as a positive sign, average consumers may not feel so positive about an increase in their interest rates — particularly not the 50% of consumers with credit card debt that just got more expensive.

And we’re not talking about an insignificant amount of debt, either. Total revolving debt in the U.S. has reached an all-time high, coming in just a little under $1.03 trillion by the end of January. Keep reading as we explore this important topic in further detail and offer several options that may help consumers pay off their debt faster, including credit cards and personal loans.

What We Owe | Who Owes It | Paying It Off

Of the more than $1 trillion worth of revolving debt balances Americans are carrying in 2018, the vast majority is credit card debt. The total amount of debt carried as credit card balances hit $830 billion at the end of 2017.

While not an all-time high, the $26 billion jump to the $830 billion mark in the fourth quarter of last year was the third such increase in 2017, giving a total annual increase of $50 billion since the end of 2016. 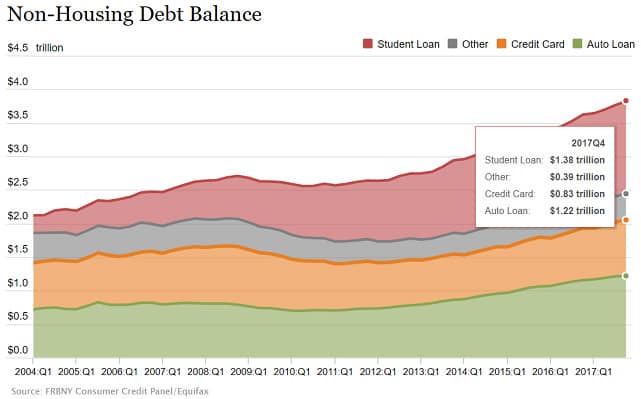 This graph from the Federal Reserve Bank of New York’s Center for Microeconomic Data shows the non-housing debt balances by debt type.

Given the 126.2 million American households, the average household has around $8,161 in revolving debt, approximately $6,577 of which is credit card debt. With nearly 248 million Americans over the age of 18, that comes out to a total of $3,353 in credit card balances per U.S. adult.

Of course, not every consumer carries a credit card; only around 70% of Americans have at least one card, which amounts to about 173 million cardholders over the age of 18. Spread out among those with credit cards alone, the average cardholder has approximately $4,789 in credit card balances.

For some of the consumers holding credit card debt, that debt is fleeting; one study found that an average of 39% of cardholders always pay their credit balances in full each month.

At the same time, around 29% of cardholders make low payments at or near the minimum payment most months. But it’s not always the consumers you think it will be.

For example, while those with FICO credit scores above 700 are certainly more likely to pay their full credit card balance every cycle, even those with scores above 800 will make a low payment around 20% of the time.

Overall, the amount of debt seems to be the best indicator of how much is paid, with balances under $1,500 more likely to be paid in full, and those over $2,000 more likely to receive just the minimum payment. Other patterns in the data emerge when looking at factors like income, age, and region.

The correlations between income and credit card debt seem to show that money doesn’t necessarily buy debt freedom. In fact, average credit card debt appears to increase with annual income, and those with the largest income have the highest credit card balances. 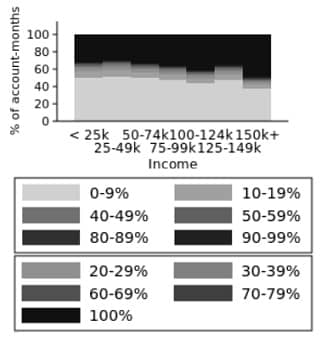 This chart from the paper “Minimum Payments and Debt Paydown in Consumer Credit Cards” shows the correlation between income and tendency to pay balances in full.

As might be expected, those with the highest incomes — $150,000+ annually — are the most likely to pay their credit card balance in full each month. However, they may still make minimum or near-minimum payments as much as 38% of the time.

While not as obvious a factor as income, age also seems to be a correlating element, with older consumers more likely to pay their credit cards in full, and middle-aged consumers equally likely to pay in full as make the minimum payment.

And likely with good reason, given that those consumers between 35 and 65 are also carrying the most credit card debt, particularly from ages 45 to 54. (On the plus side, credit scores also seem to rise with age.)

Data from Experian’s State of Credit: 2017 shows the middle generations carry the most credit card debt.

A good portion of the correlations between age and credit card debt is likely due to the cost of living, as those in their middle adult years are more likely to have home-related expenses and have dependents than those in older and younger demographics. Homeowners tended to pay twice as much credit card interest per year as renters.

The role of gender in credit card debt is more variable, with one survey saying men carried more debt, and others saying women are the more frequent debt holders.

Experian’s data — which, arguably, is bound to be the broadest-based — says that men and women both have an average revolving debt ratio of 29.9%, though women have 3.7% less average debt than their male counterparts. (Women also tend to have better credit scores.) 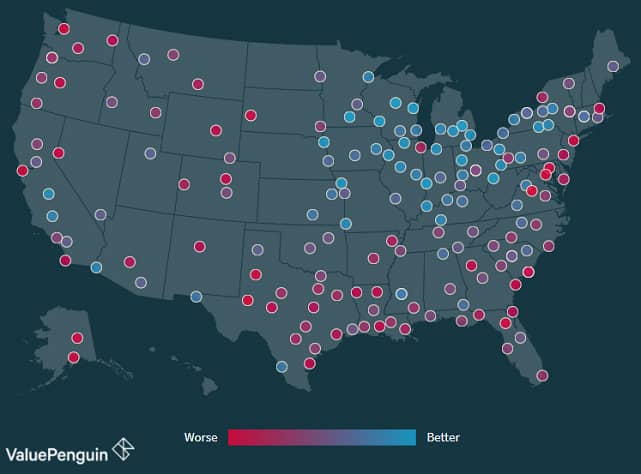 That said, the New England area also shows lower credit card debt numbers than other regions, as well as being home to three of the 10 states with the highest average credit scores.

Alaska is home to the consumers with the highest average credit card debts, sporting more than 20% more debt than the next-highest state of Colorado, though Alaska’s credit scores tend to be middling. The lowest credit scores of all are found in Mississippi.

While Alaska has the highest debt, the trend of high credit card debt is definitely most prominent across the southern and western states. The South is also where most of the lowest credit scores are found.

The Numbers on Getting Rid of Debt

Despite the large amount of credit card debt most of us seem to carry, the actual number of cardholders defaulting on that debt remains fairly low — hovering around 2.5% — which is especially good when compared to post-recession highs.

For those consumers who make up the large number of people paying less than their full balance each month, there are several ways to make your monthly payments more affordable.

If you just need a small drop or have shown credit improvements since you got your card, you may have success requesting a lower rate from your issuer; one study found 69% of people were able to negotiate a lower rate with their issuer.

If this doesn’t work or you want an even lower rate, one of the easiest ways is to make a balance transfer to a card with a 0% APR offer. The best offers, like our favorites below, can extend for 12 months or more.

The vast majority of credit cards — 89%, to be exact — will allow balance transfers, and around 41% of cards offer lower introductory interest rates to new cardholders.

One thing to watch out for, however, is that balance transfers will almost always come with fees. Only about 9% of credit cards don’t charge a balance transfer fee, which means you could be stuck paying 3% to 5% of your total transferred balance as a fee for the service. So, if you’re considering a balance transfer as the solution to making your debt more manageable, just remember to factor in any balance transfer fees that may accompany the card you’re using.

52% of People with More Than $6,000 in Credit Card Debt Have Consolidated

In most cases, installment loans can offer significantly lower interest rates than a typical credit card, though your rate will depend on your credit. Using an online lending network, like our picks below, can help you find the lowest rates for you by connecting you with multiple lenders at once.

Successful credit card consolidation can not only reduce your interest rate and monthly payments, but can also turn multiple credit card payments into a single loan payment, simplifying your finances.

As a result, as much as 52% of consumers with $6,000 or more in credit card debt have used consolidation to make debt repayment easier.

The biggest reason those with high debt avoid consolidation is the fear that it will negatively impact their credit scores (25% of respondents), while worries about getting scammed are also strong (24% of respondents).

In both cases, being sure to do your research before embarking on your credit consolidation journey can help allay your fears and smooth the process. Always investigate a financial institution before entering into an agreement.

The federal funds rate is set to rise at least twice more in 2018, which will almost assuredly mean corresponding increases in the U.S. Prime Rate upon which variable APRs are based.

But while the increases are a sign of a growing economy, they also come at a time when we have a steady growth of credit card debt, and each increase can make that debt more expensive to carry — and to repay.

To avoid becoming a negative credit card debt statistic, be sure to always use your credit cards wisely, including paying in full (and on time) each month. Healthy credit card habits can build your credit profile and make your financial life easier, turning you into a good credit card statistic.

10 Best Credit Cards After Bankruptcy to Rebuild Your Credit