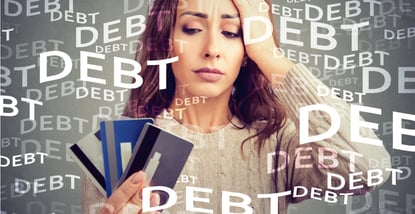 The fact that U.S. consumers owe almost $900 billion in credit card debt may not be shocking, but $900 billion is an enormous amount of debt, especially when you consider that not everyone in the country has a credit card account. The average credit card balance is more likely in the range of $6,000 to $8,000.

These statistics provide a snapshot of typical consumer behavior. Is $5,000 or $10,000 of credit card debt too much, too little, or just right? Only the individuals who have those amounts and pay the associated finance charges can say for themselves. Similarly, you’ll have to decide for yourself whether these credit card debt statistics are “shocking” or not.

In a May 5 blog post, “U.S. Consumer Debt Payments and Credit Buffers on the Eve of COVID-19,” the New York Federal Reserve reported that U.S. consumers have about $3.93 trillion — that’s trillion with a “t” — of total issued card credit.

Card credit refers to the maximum amount consumers potentially could borrow if they all maxed out their credit cards.

With about 331 million people in the U.S., $3.93 trillion of available card credit is equivalent to about $11,873 per person. Since the total population includes people who are too young to get credit or don’t have any credit cards, the per-person average for those who have one or more cards is actually higher.

Consumers owe $893 billion in credit card debt, which leaves about $3 trillion in available card credit, according to the New York Fed blog post. About 41% of households carry revolving debt, and the poorest households have the highest total debt burden, according to ValuePenguin.com.

ValuePenguin found that households with zero or negative net worth — defined as assets minus liabilities — had the highest credit card debt of any group with an average household debt of $10,308.

You may pay more in credit card interest with the snowball approach, but you’ll get a series of quicker wins that could help you stay motivated. With the avalanche approach, you may not get a quick win, but you’ll likely pay less interest overall. You can also combine the two methods or alternate between them to balance the pros and cons of each approach.

ValuePenguin.com also found that the lowest average credit card debt among U.S. states in 2018 was in Ohio, with an average card debt of $5,446. 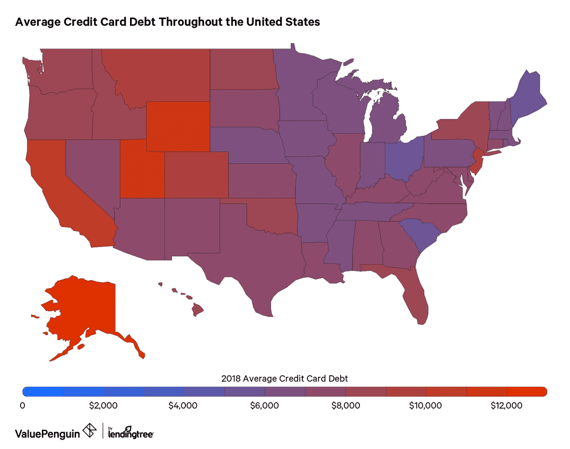 The average annual percentage rate (APR) for outstanding card accounts in May 2020 was 14.52%, according to the Federal Reserve’s Consumer Credit statistical release for that month.

That APR may seem low for credit cards, and in one sense, it is. For the same month, the average APR for accounts on which consumers paid finance charges was more than a full point higher at 15.78%.

Both of those average APRs are lower than they were in the first three months of 2020. The average APR for all card accounts in those months was 15.09% while the average for accounts on which consumers paid finance charges was 16.61%.

Despite the dip in 2020, average APRs in May were still significantly higher than they were five years ago. In 2012, the average APR for all card accounts was 12.09%, while the average for accounts on which consumers paid finance charges was 13.66%.

These higher APRs mean that, if you carry a balance today, it could cost you more in finance charges than you would’ve paid for the same balance five years ago. You may be able to lower your cost by getting a balance transfer card with a 0% introductory APR.

Three ways to get a lower card APR are:

You may have to improve your credit score to qualify for the lowest APR cards.

5. Consumers Have an Average of 3.1 Credit Cards and 2.5 Retail Cards

Those averages don’t mean you have to have three credit cards and two or three retail cards in your wallet. In fact, the right number of cards for you may not match the averages. Some consumers have only one card. Others have as many as 40 cards or more.

You should have and use at least one card to build a credit profile, which you may need to apply for other types of credit, apply for a job, rent a home or apartment, or open utility accounts or a cellphone account.

If you want to earn a variety of card rewards, it may make sense for you to have more than one credit card.

6. Baby Boomers Have More Cards, On Average, Than Any Other Generation

The same Experian report found that consumers had an average of 3.07 credit cards in 2019, with baby boomers averaging 3.5 cards.

Gen Z had the lowest average with 1.59 cards. Millennials had an average of 2.66 cards, while Gen X averaged 3.28 cards. The average for the Silent Generation was 2.9 cards.

Most people should have at least one credit card to establish a credit profile, shop online, open a cellphone account, or make hotel or airline reservations. Many people like to have more credit cards to take advantage of rewards programs and other perks and benefits. 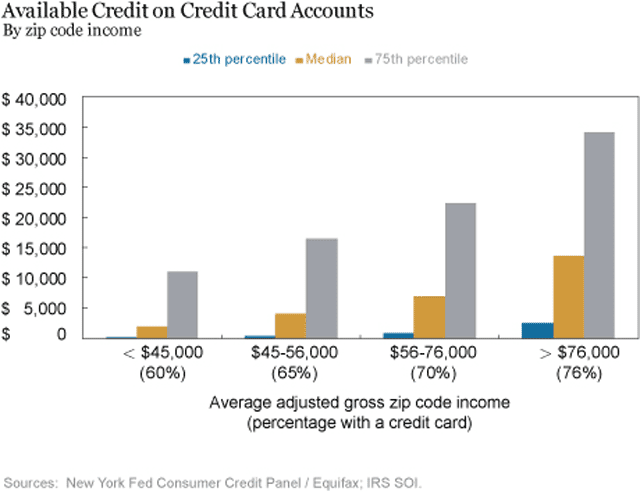 People without their own credit cards may be able to use the credit that belongs to other people in their household. Nonetheless, available credit is “an interesting gauge of the credit cushion that people can rely on in a time of crisis like this,” according to the New York Fed report.

There are also cards for people who don’t have much income.

8. The U.S. Government Has a Database of Card Agreements from More Than 300 Card Issuers

The Consumer Financial Protection Bureau (CFPB) has a database of credit card agreements from more than 300 card issuers, including credit unions and state and national banks.

Your card agreement explains the terms and conditions of your account. The agreement must disclose the APR for the card, the annual fee (many cards don’t charge one), how your monthly minimum payment is calculated, and the process to resolve card disputes.

Your card issuer is required by federal law to give you a copy of your agreement if you ask for it. Searching the CFPB database may be faster and easier. Your card’s name should be printed on your card and shown on your monthly statement.

9. There Are Only 4 Major Brands of Credit Cards

Although there are thousands of credit cards on the market, nearly all of them come from one of four card networks: Visa, Mastercard, Discover, and American Express (Amex).

Discover and Amex issue all of their own cards directly to consumers. Visa and Mastercard issue their cards through banks and credit unions.

Cards may also be co-branded by companies or organizations that market and distribute those cards and provide perks, rewards, or brand affinity warm-fuzzies to people who get those cards. Examples include airline, hotel, big box, and sports team-branded cards.

Consumers opened 106 million new credit card accounts in 2018, according to an August 2019 CFPB report, The Consumer Credit Card Market. (This report is published every two years, so the next update should be in 2021.)

Given the popularity of card rewards, it may seem that all of those 106 million new accounts would come with rewards programs. In fact, only about 60% of new cards had that feature.

More than one-quarter of the rewards cards offered cash back rewards. No other type of reward accounted for that many cards.

Mileage cards made up less than 10% of the new cards issued.

Part of the increase was due to premium cards with big signup bonuses, according to the Consumer Financial Protection Bureau report.

Rising costs for rewards may explain why card issuers have cut back some of the best rewards. Other perks, such as extended purchase returns, airline lost baggage protection, and auto rental insurance coverage, have seen declines as well.

Premium cards with higher annual fees, bigger rewards, and more benefits generally accounted for some of the increase in annual fees for rewards cards.

Cash is still a popular payment method, but cards have gained ground against paper money, especially for high-dollar transactions.

A representative sample of 2,873 consumers said they used credit cards for 23% of their transactions over staggered three-day periods in October 2018, according to the 2019 Diary of Consumer Payment Choice study conducted by the Federal Reserve. The proportion of card transactions was up 2% compared with 2017. 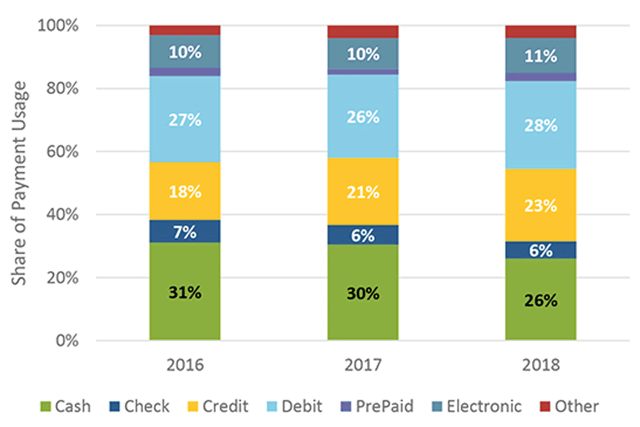 Consumers used credit for 23% of transactions in 2018, according to the Federal Reserve.

In 2018, consumers transferred $54 billion — or about 9% of the total — of card balances. Almost all of the transfers involved prime or superprime cards, according to the CFPB report.

Cash advances made up about 2% of overall card balances in 2018, the CFPB reported. The total volume of advances rose just 2% from 2015, far slower than the increase in credit card balances and purchases over the same time frame. Cash advances total more than $3 billion, on average, each quarter.

A cash advance lets you get cash, rather than make a purchase, from your available credit on your card. Your card issuer may treat your transaction as an advance if you use your card to:

In general, the maximum amount you can withdraw as a cash advance, or cash line, is 20% of your credit card limit, according to the CFPB report. Cash advances typically involve upfront fees and interest that starts to accrue as soon as the cash is advanced. Cash advances have no grace period, and the interest rate may be higher than those for purchases.

Consider these Stats as You Search for Your Next Card

While there’s no one credit score that you have to have to get the best card offers, higher scores generally mean you’ll get more offers and be offered better terms, such as lower rates, fewer fees, and better rewards.

Reviewing your credit reports may also help you spot signs of identity theft.

One thing these credit card debt statistics won’t tell you is which cards are the best cards for you. To figure that out, you’ll need to think about some personal statistics, such as your credit score, whether you carry a balance, where you usually use your cards, and whether you’re a student or you own a business.

With those parameters in mind, you’ll be able to shop for and compare cards to choose the ones you want.

10 Best Credit Cards After Bankruptcy to Rebuild Your Credit

Household Credit Card Debt is on the Rise