CalEITC4ME Works to Bring Awareness to the Estimated 1.7 Million Californians Who are Eligible for the State Earned Income Tax Credit 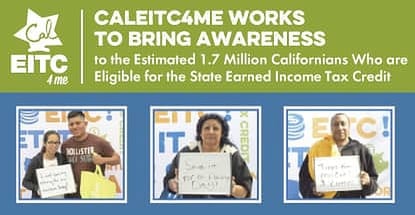 In a Nutshell: For more than 40 years, observers have hailed the federal government’s Earned Income Tax Credit (EITC) as one of the most effective anti-poverty tools in the US. In recent years, individual states have set aside money for low- and moderate-income families to claim state tax credits to supplement the federal EITC. California, a forerunner in the movement, has an estimated 1.7 million residents who are eligible for the credit. CalEITC4ME works to spread word of the program to the nearly 1 million Californians who have yet to claim the benefit. The organization holds educational and community events around the state to help eligible Californians learn how to claim the credit. Anyone who meets the income requirements can claim the benefit at any time of year, even if their income is too low to require filing taxes. //

The federal government enacted the Earned Income Tax Credit (EITC) in 1975 to help low- to moderate-income working individuals and couples make ends meet. At the time, the number of single-parent US households with children under the age of 18 was 3.8 million — far fewer than the 11 million families currently headed by a single parent. Approximately 60% of those households live in poverty.

Over the years, the US government expanded the EITC to increase its financial benefits to families and individuals in need. The program is one of the largest anti-poverty tools in the US, returning as much as $6,318 each year to individual families who meet income and family-size criteria.

Other states have adopted similar measures in recent years to further enable low-income families to meet their financial needs. California is a leader in this trend. Almost 400,000 Californians have earned refunds totaling nearly $200 million every year since 2016 when the state EITC program went into effect. But many Californians who qualify for the tax credit do not apply for it, leaving close to $2 billion in combined state and federal tax credits unclaimed. 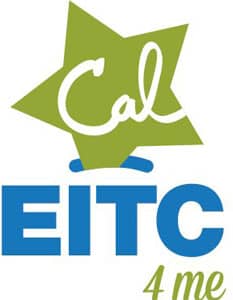 CalEITC4ME aims to close that gap through outreach and educational events that spread the word around the state about the availability of the unclaimed EITC payments. CalEITC4Me has a goal of ensuring that all eligible households claim their federal and state EITC payments by filing their state and federal taxes.

The organization’s efforts continue year round, as anyone eligible for the tax credit can claim it at any time of year, even if they aren’t required to file taxes due to a lack of income.

“Our philosophy is to go where people are, so we can reach them in as many different ways and languages as we can to provide information on this really important program,” said Josh Fryday, President of CalEITC4ME.

“We run a multi-layered campaign focused on grassroots organizing, digital marketing, online education, and we also have piloted texting and other mobile communications around the EITC as part of our outreach,” he continued.

Fryday estimated that Californians have left approximately $4 billion in EITC funds unclaimed since 2015. Most of that can be attributed to people who don’t claim the money because they aren’t aware of their eligibility for the funds.

“A good portion of the group we’re trying to reach doesn’t have to file taxes because their income is so low,” he said. “A lot of our outreach revolves around why people should file their taxes even if they don’t have to.”

Many other Californians who do file taxes may not realize they’re eligible for the tax credit based on small shifts in their income.

“There is a part of the population that kind of moves in and out of being eligible because the income thresholds are so low,” Fryday said. “You can lose some hours at your job and suddenly meet the requirements. If you get those hours back, you lose eligibility. It doesn’t take much to come in and out of eligibility.”

Over 1 million more Californians will qualify for the state EITC for the 2017 tax year thanks to higher income limits and the expansion of eligibility to the self-employed. In previous years, Californians couldn’t earn more than $14,000 a year and remain eligible for the refund, but the increase raises the income ceiling to as much as $22,300 with eligible children.

The expansion also creates eligibility opportunities for self-employed workers, as well as independent contractors and contract workers who meet income requirements. Fryday said he expects the addition of newly eligible workers to give a much-needed boost to the California economy, and provide an extra challenge to CalEITC4ME.

“Those people weren’t covered before and that now gives us an entirely new population that we need to reach to let them know they’re now eligible,” he said.

To reach everyone eligible for the credit, CalEITC4ME conducts outreach and educational events in churches, schools, community centers, and anywhere else the organization can make an impact.

EITC Puts More than $200M Back into the Local Economy

The goal of both the federal and California EITC is not only to provide support for low-income families in need but also to infuse money back into local economies. When Californians spend their tax credit money, each dollar supports local businesses, which strengthens communities and provides opportunities to add new jobs.

The money also provides support for larger households, as Fryday pointed to $9 out of every $10 claimed in California’s EITC goes to families with young children. To increase the amount of money claimed, and thus used to support families and communities, Fryday and his team work year-round to spread the word.

“There’s historically a lot of effort put into doing this outreach around tax season,” he said. “That makes sense because that’s when people are thinking about it. But the tax date is pretty arbitrary for the population that is not filing taxes and is leaving all this money on the table. We’re really focused on communicating with people, education, and organizing year round, so people don’t stop hearing about EITC after April.”

That means in the summer, long after most Californians have forgotten about tax season, Fryday and his team are filling classrooms and gymnasiums to let parents of young children know that it isn’t too late to file for an EITC.

“Our population is largely young parents, and many are single mothers with young children, so we work very closely with different school districts to make sure we get in touch with every single parent when the children return to school in August,” he said.

Fryday said his team at CalEITC4ME is always looking for new ways to reach Californians who may not be aware of their eligibility for the tax credit. Recently, the organization found success in grouping its outreach with other government-backed programs, including the Supplemental Nutrition Assistance Program (SNAP).

“We believe one way to increase adoption of the EITC is to connect it to other benefits that people are eligible for to make our communications more relevant,” he said.

A record number of Californians have claimed the EITC through the first three months of 2018, but an estimated 1 million more people have yet to take advantage of the benefit. To change that trend, Fryday and his team will continue to work throughout the year to make certain every dollar the state sets aside for Californians who need it most.