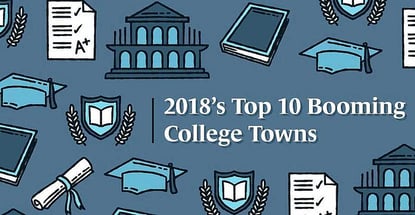 A 2017 study by TD Ameritrade found that nearly 50% of college graduates return home after receiving their diploma out of financial necessity. The financial strain of student debt, lack of job opportunities, and a high cost of living are just some of the reasons students choose to move back with their families, which for most, was never the intended plan.

Some college towns, however, provide economically friendlier climates for recent grads and job seekers than others. The following data makes a compelling case to make your college town your new primary residence, at least if you attended school in one of these 10 cities. 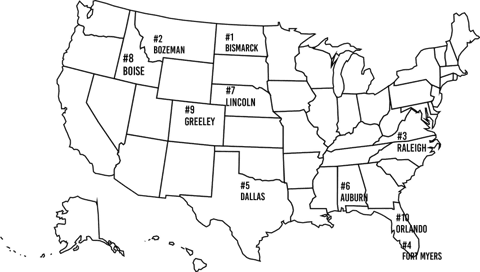 Home to the UCF Knights, students know more than just its football team is on the rise — university attendance is at an all-time high — with 66,180 enrollees for the Fall 2017 semester. Orlando’s population has grown 17.61% from 2010, and employment growth is on a steady uptick, with one of the world’s largest employers, The Walt Disney Company, right in its backyard. The current unemployment rate is at 2.9%, down from 3.6% in June 2017, with employment growth up 2.03% YOY. 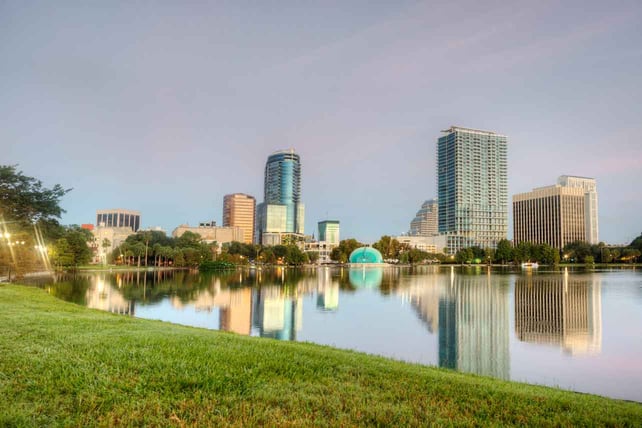 Orlando residents enjoy year-round summer, and there’s never a shortage of things to do, with theme parks, beaches, and sports venues nearby, all in a city where the cost of living is 5% lower than the national average.

Greeley, “Bear Country,” Colorado, home to the University of Northern Colorado Bears, is well known for its parks, rivers, and vast agricultural community. But it’s not just the great outdoors that has Greeley growing. The city, which has an impressive craft beer scene that’s helping spur area employment, is expected to double its population in the next 30 years. Area businesses can count on a ready workforce: 83.60% of residents have at least a high school diploma, and the unemployment rate is at 2.4% — 1.6% below the national average. 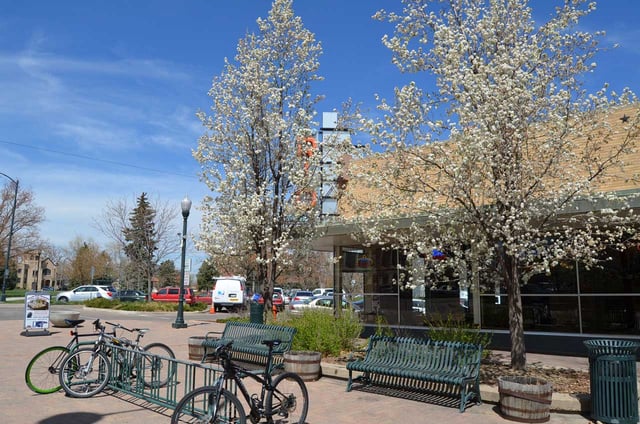 Employment has grown 2.38% since 2017 and shows no signs of slowing down. Greeley offers several museums, walking and biking trails, the Union Colony Civic Center just 1.5 miles from the university, theaters, and breweries that cater to a wide range of cultural tastes.

Boise State University was recently named one of the most innovative universities by U.S. News & World Report. And while its graduates have landed careers with top national employers, they’re also being courted by the city, which has evolved into an unassuming tech hub with Micron Technologies leading the charge. Other notable companies, including HP and Clearwater Analytics, have also established offices in the city’s western suburbs, so graduates don’t need to look far for a good job. Boise’s population has risen by 10.16% since 2010, and the city boasts an unemployment rate of just 2.2%. Almost 95% of Boise residents have at least a high school diploma. 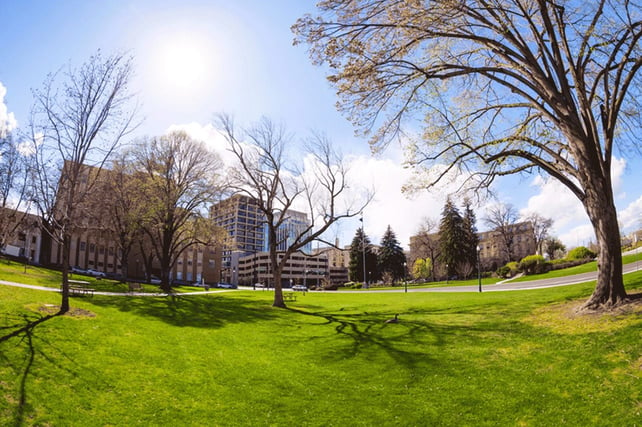 The Boise River is at the heart of the city, surrounded by hiking trails, campsites, nature centers, parks, and nearby ski slopes for residents and tourists alike.

The University of Nebraska was established in Lincoln – then known as Lancaster – in 1869 when the population was a mere 500 people. Today, more than 284,000 people reside in the state’s capital city, where the population has gone up 10.2% since 2010, and the cost of living is 7% lower than the national average. The university is the city’s largest employer, and employment has grown by 3.37% over the last year. 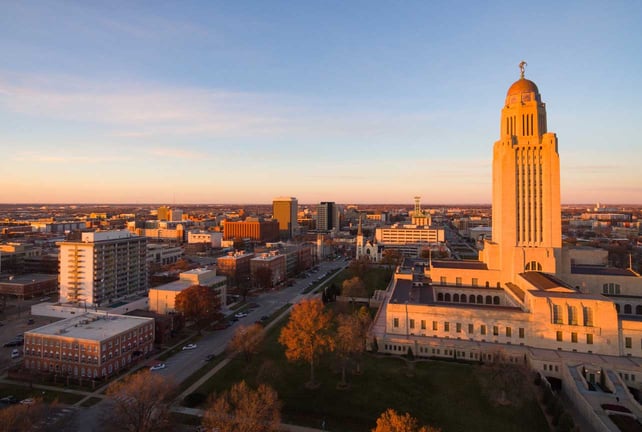 Aside from attending Husker games, residents of Lincoln, Nebraska, enjoy museums, gardens, parks, and biking trails. The city was named the Happiest City in America by the 2012 Gallup-Healthways Well-Being Index.

Auburn has the youngest median age on this list at 23.9, thanks, in part, to Auburn University. The cost of living is 8% lower than the national average and the population has increased nearly 20% in the past seven years. With that comes an influx of employment that has contributed to an uptick in the economic growth of 4.25% over the last year. The city is rooted in tradition with an economy primarily fueled by educational services, accommodation and food service, and manufacturing. 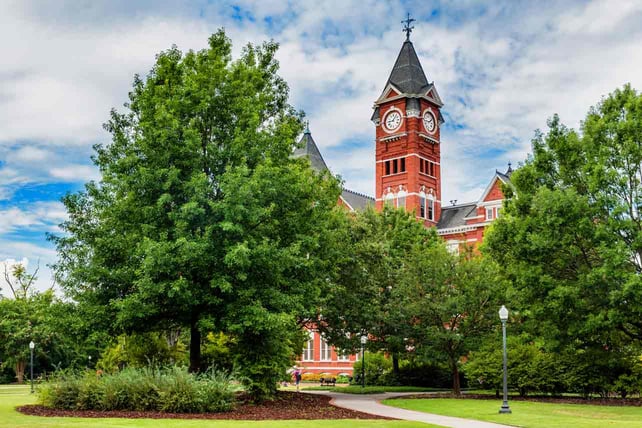 Jordan-Hare Stadium and Plainsman Park are big draws for Auburn folks beaming with Tiger pride. Chewacla State Park and the city’s many other parks and nature centers attract visitors from all around.

Dallas, by far the biggest city on this list, hardly needs an introduction. It has several colleges on the rise within city limits and surrounding areas, including Texas Woman’s University, the nation’s largest university primarily for women, and the University of North Texas at Dallas, which ranks number 1 in the state and 2nd in the nation for lowest student debt upon graduation. The population is up 11.96% since 2010, and the city has enjoyed a 5.05% increase in employment over last year, while the unemployment rate continues to decline. 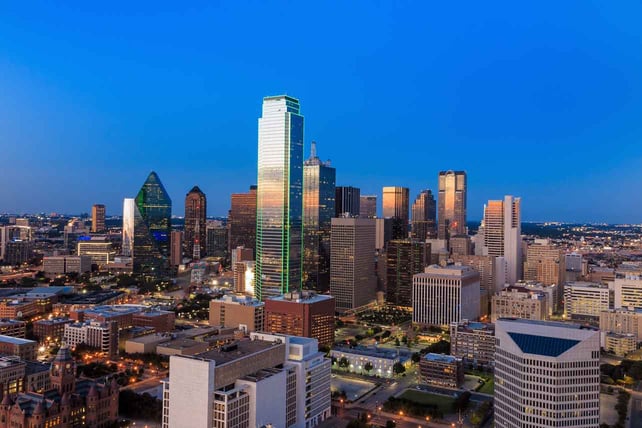 With big-city life comes an abundance of things to see and do, and many large companies – and startups – that provide job opportunities for college grads.

The Southwest Florida area has seen the largest population spike on this list, up 28.32% in the past seven years. Florida Gulf Coast University and Florida Southwestern State College provide students with opportunities to excel in many professions, including healthcare careers, the largest industry in Fort Myers. Employment growth is up 5.34% over last year and the unemployment rate is on par with the national average, while the cost of living is 4% lower than the national average. 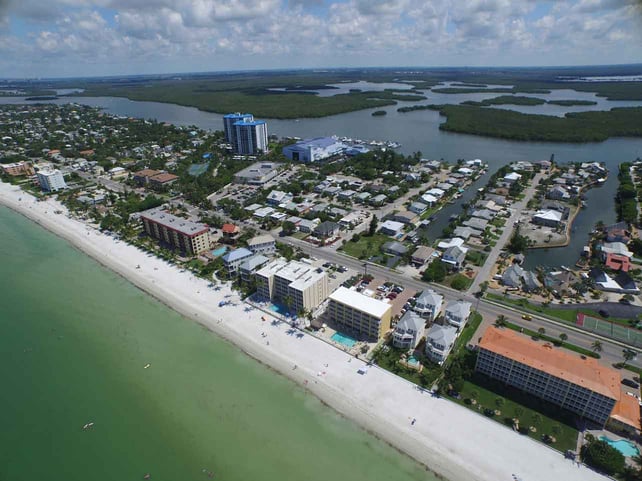 The area provides its residents with a seemingly endless coastline to enjoy the year-round beach weather and an ever-evolving downtown area with a great bar and restaurant scene. Larger cities — Tampa and Miami — are both just two hours away.

North Carolina State attracts students from around the world and is the #1 Best College in North Carolina according to Money magazine, so employers don’t need to look far for top talent. The median household income at $64,456 is above the national average, and Raleigh enjoys a cost of living that’s 5% lower than the national average. The city’s economy has been steadily rising for some time now, thanks to its workforce specialization in professional, scientific, and tech services, as well as management of companies and enterprises. 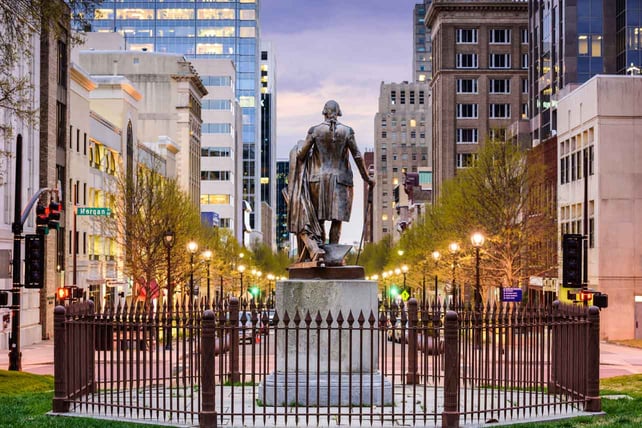 Home to the Montana State University Bobcats, Bozeman’s economy is particularly specialized in educational services, agricultural, forestry, fishing, and hunting, among other specializations. The city’s population is up nearly 25% over the last seven years, an impressive jump for what is also the smallest town on this list. Not only is unemployment the lowest on this list at 1.9% — down a full half percent since May 2018 — nearly 99% of its residents have a high school diploma, another leading stat on this list. 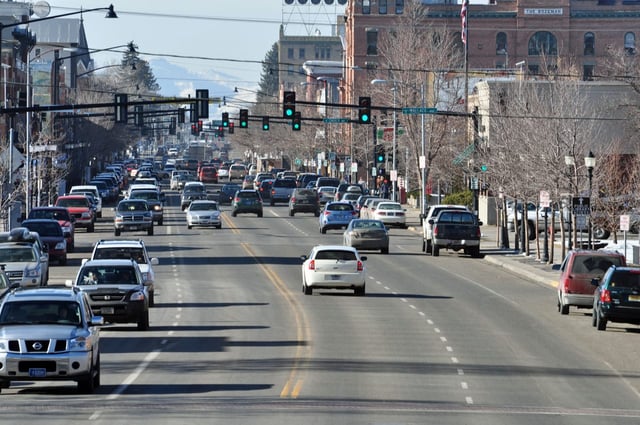 Bozeman offers residents more than 60 miles of bike trails and lanes and is regularly recognized as one of the best places to live in the country.

Business is booming in Bismarck, which boasts the highest employment growth — 12.20% — this past year alone and where the median household income is 4.48% above the national average. Graduates of Bismarck State College and the University of Mary seeking employment can take comfort in knowing they’re already in a city with thousands of jobs waiting to be filled. 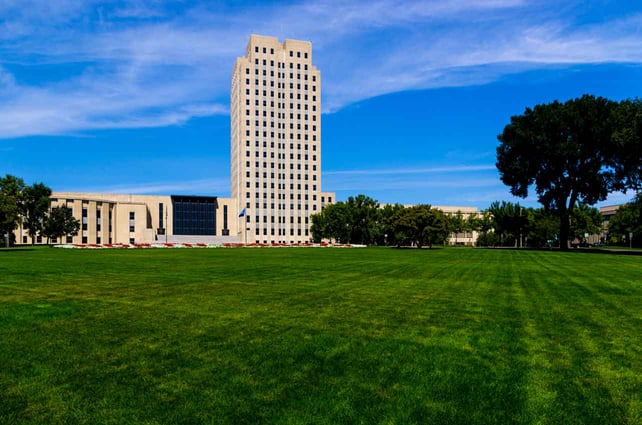 People are flocking to Bismarck’s serene surroundings and historic sites. Five miles outside of Bismarck is McDowell Dam Nature Park, where locals enjoy swimming and other lake activities during the summer months. Bismarck was recently ranked among Livability’s Top 100 Best Places to live.

We looked at population growth over seven years, the education level of the locals, economic growth and cost of living compared to the national average, and job opportunities throughout the US to determine the college towns that netted the highest positive results in these combined categories to determine 2018’s Booming College Towns.

The Stacking Benjamins Podcast: A Fun Approach to Financial Literacy