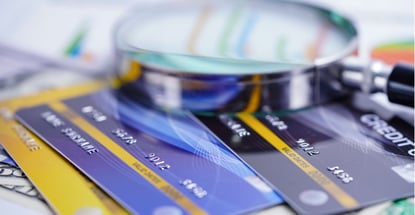 Credit cards are a ginormous business. In the U.S. alone, consumers and businesses used credit cards to purchase almost $4 trillion in goods and services in 2019.

That $4 trillion was generated by more than 44 billion card transactions. Customers owed credit card companies more than $1 trillion by the end of 2019.

The numbers come from a February 2020 Nilson Report that ranked the largest issuers of Visa, Mastercard, American Express, and Discover cards based on their outstanding receivables — or debt owed to them — at the end of 2019. Receivables for card companies are debt for cardholders. The report included cards for businesses and consumers.

A high ranking based on receivables doesn’t necessarily mean that a credit card company is more profitable for its investors or friendlier to its customers. Still, we’re impressed. Read on to see credit card issuer market share data and you may be as well.

The top-10 card issuers include all of the biggest brand names in the business. Chase, Citi, Bank of America, Capital One, Wells Fargo, and U.S. Bank, which issue Visa and Mastercard cards, are in the top eight along with American Express and Discover, which issue their own cards. Barclays and Synchrony Financial rounded out the top 10. 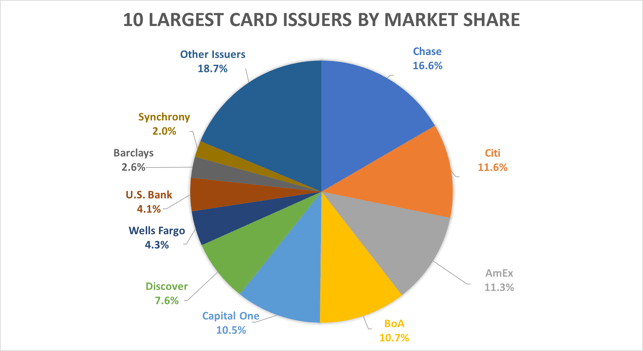 Together, these issuers controlled 81% of the credit card market based on receivables and 85% based on purchase transactions in 2019. Their slice of the receivables pie was smaller than it was five or 10 years earlier, but the pie itself was larger. Their share of purchase transactions was almost unchanged compared with earlier periods, but again, the pie itself was significantly bigger.

Here are the 25 top issuers, listed in rank order by outstanding receivables at the end of 2019. The rank-order positions for 2019 and 2018 include Mastercard and Visa issuers and cards only.

The numbers of active accounts and credit cards issued are in millions. Active accounts are defined as those that had at least one purchase transaction in October, November, or December 2019.

After topping the ranks in 2018, Chase gobbled up another 0.5% or so of market share in 2019. The company also posted the largest increase in receivables, up about $12.3 billion year over year.

Next on the list are American Express (AmEx), which added almost $47 billion, and Citi, which added about $34 billion. Chase also scored double-digit increases in its total number of purchase transactions.

Chase Bank is incorporated in Delaware.

Based on outstanding receivables, Citi gained just 0.06% of market share in 2019, but that sliver of growth was enough for the credit card issuer to hang on to its second-place ranking for the year. Citi also had the third-largest increase in its total dollar value of receivables, which grew $5.8 billion.

Like Chase, Citi was one of only three top-10 issuers that gained market share in purchase transactions. Citi’s 0.05% gain helped it capture 11.2% of the purchase transaction volume. That fraction may sound small, but it added an extra $34 billion, slightly more than Capital One’s gain of $33.3 billion.

Citi is incorporated in South Dakota.

American Express lost a very slim slice of market share in 2019 for a total segment of about 11.3%, based on outstanding year-end receivables. The small dip put AmEx in the third position behind Citi on this list.

AmEx is incorporated in New York.

Bank of America is incorporated in Delaware.

Capital One gained a small slice of market share in 2019 that kept it in fourth place — with 10.5% of the market — among the Visa and Mastercard issuers. Capital One also had the most active accounts, the most cards issued, and the second-largest jump in receivables, which were up $6.95 billion.

Capital One also scored double-digit increases in the number of purchase transactions, along with only eight other issuers among the top 20.

Capital One is incorporated in Virginia.

Discover gained 0.09% in market share, representing almost 7.6% of the total market. That’s thanks to the fourth-largest increase — $4.3 billion — in total dollar volume of receivables for the card issuer from 2018 to 2019.

Though Discover lost 0.09% of its share in purchases, it still achieved a significant gain in total dollar volume of these transactions, adding $7.1 billion for a 3.7% share. Discover also achieved a double-digit increase in its number of purchase transactions.

Discover is headquartered in Illinois.

Despite those increases, the issuer lost an almost negligible slice of its market share, retaining its ranking with 4.1%. It lost 0.07% of its purchase transactions, capturing 3.9% of the total.

U.S. Bank is incorporated in Ohio

If those 2%-range segments seem small, keep in mind that these are trillion-dollar markets and small segments are still very large sums of money.

Barclays is incorporated in Delaware.

Synchrony is incorporated in Utah. The company was spun off from GE Capital in 2015.

The Next 15 Largest Issuers

With the top 10 card issuers controlling 81.3% of the market, the rest are left to divvy up the remaining share of 18.7%.

Here are the next 15 issuers on the Nilson Report list. None of them had a market share of more than 2% based on year end 2019 outstanding receivables.

Navy Federal Credit Union was the only credit union among the top 25 U.S. card issuers in 2019. Despite its smaller size, the issuer achieved the sixth-largest increase in total outstanding receivables, adding $2.64 billion compared with the prior year.

Only four top-20 issuers had a double-digit percentage increase in outstanding receivables. Navy Federal was a strong second with a 13.2% gain. Alliance Data led the category with a 15.2% increase. Comdata and Wex gained 12.1% and 10.6%, respectively. Comdata and Wex are financial services companies that issue corporate cards.

Navy Federal also made the short list of issuers that scored double-digit increases in their number of purchase transactions. Navy Federal again came second in the category, after Alliance Data and ahead of PNC Bank, Comdata, Capital One, Credit One Bank, Chase, Wex, and Discover.

Navy Federal is based in Virginia.

USAA is a diversified financial services company that serves military personnel, veterans, and their families. The company has 13 million members worldwide.

USAA is headquartered in Texas.

PNC Bank achieved strong growth in its card business in 2019. The bank recorded double-digit year-over-year percentage increases in its year-end outstanding receivables and its number of purchase transactions. PNC also scored the tenth-largest increase in its total dollar volume of outstanding receivables, which grew $1.2 billion year over year.

PNC is incorporated in Delaware.

Credit One is incorporated in Nevada.

TD Bank has branches in the Northeast and mid-Atlantic regions, Washington, D.C., the Carolinas, and Florida. It is a subsidiary of The Toronto-Dominion Bank of Toronto, Canada.

TD Bank is incorporated in Delaware.

First National of Nebraska has $23 billion in assets and serves customers in Colorado, Texas, South Dakota, Nebraska, Kansas, Iowa, and Illinois. Among the cards it issues is American Express.

First National of Nebraska is headquartered in Nebraska.

Alliance Data posted strong numbers in 2019. It achieved double-digit percentage increases in outstanding receivables and purchase transactions. It also scored a double-digit jump in its purchase volume, leading the list in this category.

Merrick Bank offers credit programs for people who want to build or rebuild their credit. It also offers loans, consumer finance options for marine, RV, and horse trailer dealers, and financial services for various types of merchants, including non-traditional businesses.

Merrick Bank is incorporated in Utah.

BB&T still has its signage up in 15 states and the Washington, D.C., metro area where it has branches; however, the company merged with SunTrust Bank, number 21 on this list, in December 2019. The merger — which formed Truist — was the largest between two banks in the last decade.

SunTrust Bank has been part of Truist Financial Corp. since its December 2019 merger with BB&T, number 20 on this list. Truist will divest more than 30 branches as part of the merger, but would still almost certainly rank higher on this list than BB&T or SunTrust individually.

SunTrust Bank is incorporated in Georgia.

Regions Financial provides consumer and commercial banking, wealth management, and mortgage products and services for customers across the South, the Midwest, and in Texas.

Regions Financial is incorporated in Alabama.

Citizens Bank offers retail and commercial banking services in the New England, the Mid-Atlantic, and Midwest regions. The bank was acquired by RBS Group in 1988. Since then, it has grown through more than 25 strategic acquisitions, primarily of other banks or their branches.

Goldman Sachs’s Apple Card launch in August 2019 propelled the issuer to the seventh-largest increase in its total dollar amount of outstanding receivables, which amounted to $1.86 billion at year end.

For the record, here are the next 10 largest credit card issuers, listed according to rank, with their state of incorporation for financial companies and banks, or headquarters location for credit unions:

Discover Vs. Capital One Vs. Chase

What Credit Bureau Does Chase Use?