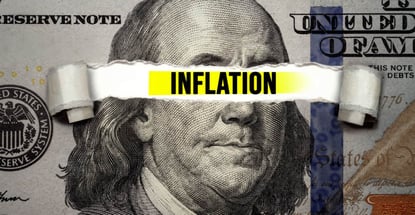 Soaring inflation has impacted the financial lives of countless millions of Americans. And although recent reports suggest that inflation may finally be slowing down, recent (and significant) price hikes in consumer goods and services have placed a heavy burden on many households. That means stuff is more expensive, but it’s stuff we still have to buy somehow.

There have also been some subtle and concerning shifts in consumer credit management behaviors during the last 12 months. Only time will tell, but these changes could be harbingers of bad news where credit scores are concerned.

A bad mark on your credit report, such as a late payment, has the potential to negatively impact your credit score. Your credit history determines 35% of the points in your FICO Score.

In April 2021, some 15% of a sample of consumers had at least one delinquency on their credit reports in the past year compared with 15.2% of surveyed consumers who did so in April 2022.

While the uptick in the percentage of consumers with a history of delinquency may not seem extreme, any upward movement in these figures could be reason for concern.

There’s also another thing to keep in mind as you consider these statistics. Since March 2020, consumers have had the considerable credit reporting protections of the CARES Act. Long story short, people who were actually delinquent on credit accounts were not having those delinquencies reported to the credit bureaus if they were given accommodation by their lenders.

It is also worth noting that some late payments do not affect your credit scores at all because they are never reported by your lenders. For example, you could be a few days or even a few weeks past due on a payment before a credit card issuer reports you late to the credit bureaus.

The credit reporting industry standards do not allow the reporting of late payments until you are a full 30 days past the due date, which means you can be up to 29 days late and never have a delinquency hit your credit reports.

But even if credit card issuers and other lenders don’t report a delinquency to the credit bureaus right away, it’s best to always pay on time. Once you fall even one day behind, you could face late fees and other negative consequences. Those added costs could lead to more debt and bigger financial obstacles to overcome in the future.

And, because having a credit card is a privilege and not a right, your card issuer can always close your account if you’re continually late.

It seems like the higher costs of goods and services have caused consumers to rely more heavily on their credit card accounts. Or consumers are using credit cards to make other ends meet.

In fact, a quarterly report from the Federal Reserve Bank of New York found that credit card balances rose $38 billion between the third quarter of 2021 and 2022 — the largest year-over-year increase in more than 20 years.

The ideal way to manage credit card accounts, of course, is to pay off your entire balance each month. If you pay by the due date, you can avoid paying interest charges on most accounts thanks to the way credit card grace periods work.

However, you can also aim to pay off your credit card balances early. When you pay your balance in full before the statement closing date, you keep the credit utilization ratio on your credit reports at or near 0%.

NOTE: There is no shortage of incorrect information on the web about the influence of debt on your credit scores. So just to make sure there’s no misunderstanding, please keep the following facts in mind.

New Credit Accounts Are On the Rise

Higher prices associated with inflation have placed pressure on the budgets of many American households. But consumers are not seeking credit more often than they were in the recent past.

But the number of Americans opening one or more new credit accounts in the previous 12 months did increase in 2022, according to FICO’s study.

The study found that 44.8% of surveyed consumers had opened one or more new credit accounts in the previous 12 months as of April 2021, compared with 47.6% of the population who had done so by April 2022.

You may be asking yourself, how can the number of credit inquiries go down in 2022, but the number of new account openings goes up in the same year? Fair question. It’s important to keep in mind that a hard inquiry doesn’t always equate to a new account. The inquiry simply indicates that some party, normally a lender, pulled a credit report.

When you open a new account, it has the potential to impact your FICO scores in a few ways. First, when you apply for credit, the lender is going to perform a credit inquiry. There will be a record of said inquiry on at least one of your credit reports. And inquiries can lower credit scores, albeit by an insignificant amount.

Second, when the new account hits your credit reports, it will lower the average age of your accounts. That may result in a lower score because scoring models like older credit reports.

Again, it’s fine to open new credit when you need or want to seek financing, but you should understand that doing so can result in changes to your credit reports that can lead to lower credit scores.

Inflation is a Reality of Life, Plan Accordingly

No one likes to pay higher prices for gas, groceries, and other essential goods and services. And certainly nobody liked to see all of those red numbers when they checked their 401k performance at the end of 2022.

On the flip side, the increased rate of inflation and the steps taken by the Federal Reserve to deal with it have the potential to help you earn more money. High-yield savings accounts, CDs, I-Bonds, and other types of deposit accounts are safe investments that over modest returns.

Because inflation is a reality of life, planning accordingly is important. Make sure you’re budgeting for higher prices and cutting non-essential expenses. Or, if these measures are not of interest, at least be aware that charging higher balances on credit cards can lead to lower credit scores.