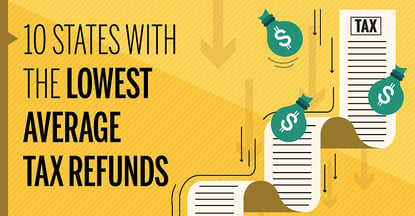 It’s that special time of year that makes Republicans, Democrats, and independents cringe while CPAs crack their knuckles as they prepare to eschew the sunlight for several months.

While you would be hard-pressed to find a U.S. worker who is excited about tax season, plenty of people enjoy seeing a nice, hefty refund check hit their bank accounts. A lot of factors go into determining how much a household must pay in federal taxes in any given year. And the average refund size varies quite a bit from state to state.

Here, we have compiled a list of the 10 states where taxpayers received the lowest average tax refunds in 2017. (If you’re interested in checking out the states with the highest average refunds, we’ve got that covered as well.)

While receiving a large refund feels nice, getting a smaller tax refund isn’t necessarily a bad thing. When you receive a tax refund, it means the federal government took out too much from your paycheck throughout the year. Essentially, this means the IRS is getting an interest-free loan, Tim Steffen, the director of financial planning at Robert W. Baird & Co. told CNBC.

Additionally, receiving a smaller refund means you were able to take home a larger amount of the money from your paycheck that was yours to begin with. Some folks even aim to have the exact amount of taxes deducted that will maximize their paycheck and end tax season without a refund and without having to pay taxes. And the more investment-savvy among us take what would have otherwise been deducted and put it into an interest-growing fund, rather than the federal government’s coffers.

Interactive Map of States with the Lowest Average Refunds

Below is a graphic of the 10 states where taxpayers saw the lowest average tax refund amounts in 2017. Refunds in these states ranged from an average high of $2,692.23 to $2,421.28 — a difference of only $270.95 between the No. 10 ranked state and the state with the lowest average refund in the country.

Hover over each state to see the average refund amount and the total number of refunds.

The states that make up our list represent diverse population numbers, median incomes, economic drivers, and size. And, the states with the lowest tax refund amounts were spread all across the country, from Maine on the East Coast to Oregon on the West Coast. 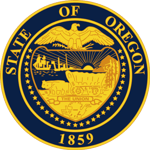 Kicking off the list as the state with the 10th lowest tax refund in 2017 is Oregon, whose residents received an average refund of $2,692. The U.S. Census Bureau estimated that 4,142,776 residents lived in Oregon in 2017. Of those, 3,275,990 filed federal tax returns and 1,459,595 received refunds. The federal government collected just over $33 billion from Oregonian taxpayers and refunded nearly $4 billion of that in 2017. The Beaver State’s median annual income of $64,610 is among the higher averages on our list.

The geographically diverse state in the Pacific Northwest is one of three (along with Washington to the north and California to the south) that makes up the U.S. West Coast. The state is only second to Washington in producing hydroelectric power in the country. Its wide-ranging landscapes produce diverse crops and a robust forestry industry. 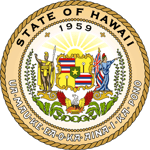 Up next at No. 9 is Hawaii, whose residents received an average refund of $2,682.04 in 2017. Taxpayers in Hawaii filed 1,126,627 returns with just under half of those receiving refunds. The state’s median income is $73,575. With some of the world’s most beautiful beaches, breathtaking volcanoes, and prime waves for surfing, tourism is the state’s top industry.

Aloha State residents paid nearly $9.5 billion to the federal government and received about $1.5 billion in total refunds in 2017. The Pacific Island nation is the most recent addition to the U.S., becoming the 50th state in 1959.

Hawaii is also the most expensive state to live in because of its relatively isolated location and the fact that many products must be imported to the islands. So that tax refund likely won’t get you far in the Aloha State. On the plus side, Hawaii is responsible for allowing the United States to once again display an even number of stars on its flag.

With its borders entirely within the Appalachian Mountain range, West Virginia is often ranked as one of the nation’s most scenic states. But, Forbes ranked the state at No. 50 on its “Best States for Business” list three years in a row (last year it jumped to No. 49) so it’s not one of the country’s economic hotbeds. And the Mountain State claims the lowest median income — at $45,392 — on our list. The good news is that with the state’s low cost of living, a $2,675.34 tax refund will go much farther than it would in most other states. And, with its abundance of breathtaking views and top-rated hiking, there are some things money can’t buy. 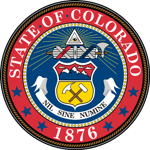 Next up at No. 7 is another state known for its scenic mountain views — Colorado, whose residents saw an average federal tax refund of $2,645.18. With a young population and diversified economic drivers, including agriculture, high tech industry, and tourism, Colorado boasts a median income of $74,172 — the highest on our list and one of the highest in the nation.

Taxpayers ponied up a total of $56.7 billion dollars to the federal government and received $5.4 billion back in refunds. With its high median income and positive job outlook — no matter the size of the tax refund — Colorado’s slopes should appeal to tech-savvy entrepreneurs and young families alike. 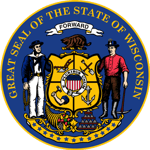 It may be the country’s No. 1 producer of cheese, but with an average federal tax refund of $2,620.78, Wisconsin ranks No. 6 on our list. The IRS counted 4,476,209 federal income tax filers among Wisconsin’s estimated 5,795,483 residents in 2017. Out of about $53 billion in tax funds collected by the federal government, nearly $6 billion went back to Wisconsinites in refunds. The state boasts a healthy median income of $63,451.

Dairy is a major driver of Wisconsin’s economy, but it’s not all cheese and milk in the Badger State. Agriculture, manufacturing, and healthcare are also major industries there. The only other state whose coastline touches more of the Great Lakes is Michigan. German is the most common ethnic ancestry in the state thanks to German immigration in the early 19th and 20th century, it might be worth spending at least a portion of your tax return on a quality brat and brew if you’re in the region. 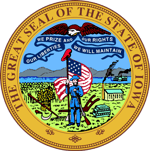 Iowa — Wisconsin’s southeastern neighbor — came in with the fifth lowest average tax refund in 2017 at $2,568.32. The Hawkeye State’s economy is driven in part by agriculture, food production, and renewable energy. Financial services are also a big player in the state’s economy with companies including Wells Fargo and Principal Financial as major employers in Des Moines, the state capital. 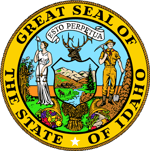 Idaho leads the nation in potato production, even setting a production value record with its $1.2 billion crop in 2017. But it is also called the Gem State with good reason. According to Visit Idaho, just about every type of gemstone has been found in the state. And its state stone, the star garnett, is only found in Idaho and India. 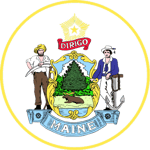 Closing in on the state with the lowest average federal tax refund is Maine comes at No. 3, with an average refund of $2,497.45. The state’s 2017 population — estimated at of 1,335,907 residents — makes Maine one of the least populous states east of the Mississippi by territory. About 90% of the state covered by forests. And about 83% of the state’s population — or 1,109,694 residents — of those residents filed tax returns with just under half of those returns receiving refunds.

The IRS collected about $8 billion in taxes from residents of the Pine Tree State and returned $1.3 billion as refunds. Maine’s median income of $51,664 ranks above only that of West Virginia on our list.

The largest New England state is known for its fishing and lobster industries, but overall the economy is not one of the nation’s strongest. Still, the state’s cost of living is relatively low compared to that of many other states. A tax refund of nearly $2,500 isn’t too shabby considering all the factors, and it will certainly pay for more than a few nice lobster dinners. 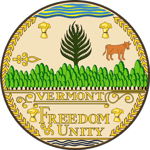 Coming in at No. 2 on our list is another New England state — Vermont — with a 2017 average federal tax refund of $2,442.57. The Green Mountain State has the second-lowest population in the country with 623,657 estimated residents in 2017 (Wyoming is the least-populated state). Vermont also has the nation’s smallest economy at $34 billion.

Just over 572,000 residents filed federal tax returns in 2017, and 259,915 of those taxpayers received refunds. The federal government collected nearly $4.5 billion from Vermont residents and refunded $635 million. Despite its small economy, Vermont’s median income is a respectable $63,805 — slightly higher than the national average.

The state also boasts one of the lowest unemployment rates in the country. With scenic mountain views, clear streams, and the vast Lake Champlain, Vermont is considered by many to be among the nation’s most picture-perfect states. It is also the country’s top producer of maple syrup. 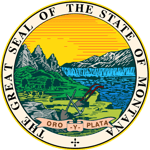 Finally, we have the state with the lowest average federal tax refund amount for 2017 — Montana. Taxpayers in the state received an average refund of $2,421.28. The state is the fourth-largest by area, but it is one of the least-densely populated with an estimated 1,050,493 residents in 2017. Montana taxpayers paid about $6 billion in taxes to the federal government and received nearly $930 million in refunds.

The median income of the Treasure State was $59,087, slightly below the national median income. Like Vermont, Montana also boasts one of the nation’s lowest unemployment rates. Overall, Montana generally sees a steady economy and fared better than many states in the 2008 Great Recession.

Montana shares the country’s longest border with Canada to the north and is home to a geographically diverse landscape that changes from vast plains in the east to mountainous peaks in the west. Although Montana residents don’t see tax refunds quite as large as those of other states, as mentioned above, that’s not a bad thing. And for those Montana residents who prefer a larger refund, the Big Sky Country has plenty of other things going for it.

To create this ranking, we combed through 2017 IRS tax data for each state and divided the amount of Internal Revenue refunds issued, including interest, by the number of Internal Revenue refunds issued to identify the average refund amount for all 50 states and the District of Columbia. We also explored income and data figures from the Tax Foundation, the U.S. Census Bureau, and Forbes.