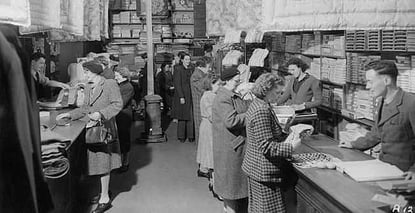 Ah, the ubiquitous credit card. Considering how these little pieces of plastic have helped to shape the consumer landscape for nearly six decades, do we really give them enough respect? (You thought I was going to say credit, didn’t you?)

We seldom give more than a passing thought to using a credit card for everything from dinner at our favorite restaurant to paying for gas at the pump. But have you ever wondered who invented the first credit card?

Where did it all begin? 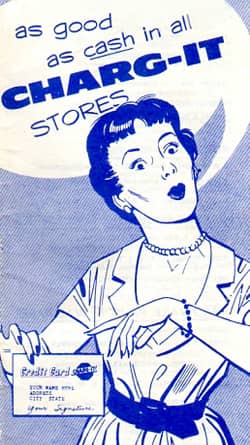 Seen above, a page from a 1965 brochure for the Charg-It Card.

While there are many claims to this distinction, it’s widely agreed the idea for the first “universal” credit card was thought up by John C. Biggins, a banker and innovative credit promoter, in 1946.

At the time, Biggins was working for the Flatbush National Bank in Brooklyn, New York and decided to try an experiment in providing credit to the local community around his bank. He promoted his new concept which he called “Charg-It” as a way for local stores to offer credit to patrons of the bank.

As the issuer of the cards, the bank would pay the stores and assume responsibility for collecting the debt from the Charg-It card holders.

A brief history of credit

To help us understand what a truly novel concept this new credit card was, we’ve got to take a brief look back at the history of credit.

While merchants have been allowing consumers to buy on credit for hundreds of years, it was always a direct relationship between the seller and buyer. Even in the early part of the 20th century, department stores, oil companies and others issued cards that were only good for purchases at their locations and were almost always payable in full upon receipt of the bill.

Now, however, the bank was agreeing to pay the merchant and would “lend” money to the consumers who used the Charg-It card … with interest of course.

While Biggins’ groundbreaking idea was implemented on a very small scale – only open to residents and merchants within a few blocks of his bank – the idea quickly caught on.

A small savings and trust in Patterson, New Jersey was the next to implement third-party credit card payments in 1950, and by the middle part of that decade, mother local banks had joined in with similar plans.

It wasn’t until 1958, though, that the first national credit card issuer joined in with their own entry – the American Express Card. In its first year, nearly half a million members signed up for the Amex card, and it was being accepted at more than 30,000 locations.

So the next time you reach for that convenient card in your wallet to buy something on credit, consider the history of that little piece of plastic … and maybe give a little nod to John C. Biggins.

Almost 60 years later, there are now plenty of exciting credit cards to choose from. Why not open a new one today?

Can You Withdraw Money From a Credit Card? Here's How