The Average Number of Credit Card Transactions Per Day & Year 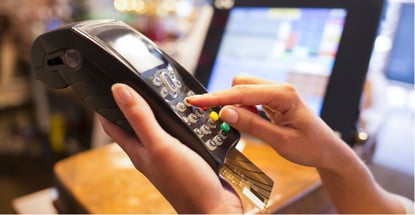 Credit card users make a mind-boggling number of daily transactions every year. The figures are astounding, whether you’re looking at what’s happening in the United States or in countries across the globe.

Credit card payments in 2018 totaled $44.7 billion in the U.S. alone, according to The 2019 Federal Reserve Payments Study. The speed at which these transactions process is awe-inspiring. Credit cards can settle 5,000 transactions per second.

To further illustrate the magnitude of credit card transactions, here is more data about what’s going on locally and in far-flung locations, as well as how it breaks down by credit card brand. By getting a sense of these trends, you’ll have a richer idea of how to use credit cards in a way that will help you get ahead.

Credit Card Transactions in the U.S.

If you divide that figure by 365, the results show that more than 108.6 million credit card transactions occur in the U.S. every day.

Modern credit cards were founded in the U.S. in 1950 and their popularity has grown dramatically since.  Americans today liberally use their credit cards, and when the transactions are broken down over a variety of different categories, the facts become even more interesting.

According to the credit card processing company Shift:

The Federal Reserve Bank of San Francisco made more discoveries in its 2019 Diary of Consumer Payment Choice report:

In 2018, the Federal Reserve Bank of Atlanta published its annual Diary of Consumer Payment Choice report, reviewing changes from 2015:

The 2019 Diary of Consumer Payment Choice report discovered that in October 2019, 43% of  U.S. consumer transactions made were for groceries, gas, and shopping.

Contactless transactions are definitely on the upswing, found a 2020 Mastercard study. Fifty-one percent of Americans are currently using some form of contactless payment, with contactless cards typically being used for a wide span of essential expenses:

Merchants responding to the American Express survey expressed interest in investing in payment data security. Thirty-three percent say they are increasing their budget for such data security systems, up 27% from the previous year.

Credit card companies are also concerned about losses due to transaction fraud. A 2018 Nilson Report found that $27.85 billion was lost to fraudulent activity, with $9.47 billion of those losses occurring in the U.S. alone.

When asked about how they felt and how they used their credit cards:

When it comes to credit card transactions, consumer behavior is constantly changing. Deloitte reported survey results that highlighted adapting behaviors and how they will impact credit card issuers:

There were 368.92 billion purchase transactions for goods and services worldwide in 2018, according to 2020 research from The Nilson Report. If you divide that figure by 365, roughly 1.01 billion credit card transactions occur every day around the world. 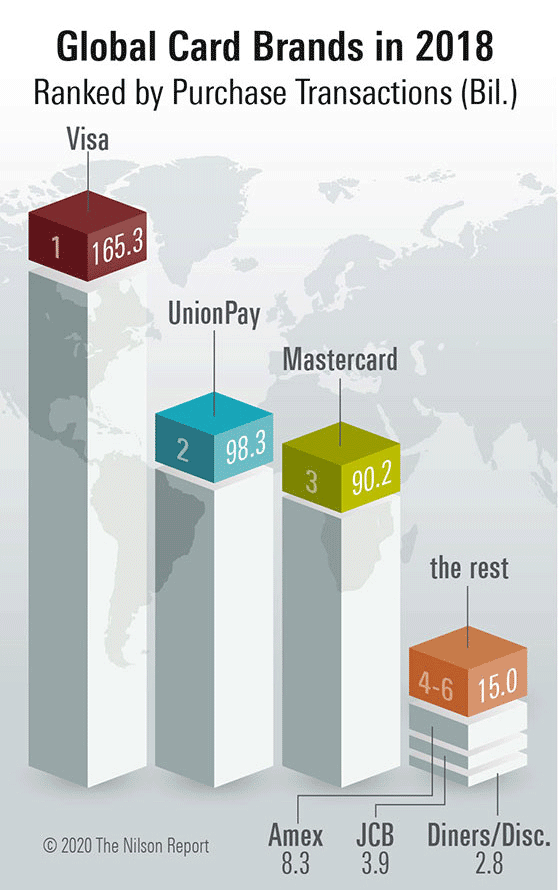 Some 2.8 billion credit cards are in use worldwide, according to the Shift report cited above. Consumers in some countries are better at keeping credit card debt low, while others have more trouble. Out of the top 10 countries by gross domestic product:

And then there’s China. With approximately $605 billion in revenue, China is the largest contributing country to global payment revenues in the world, according to the 2019 McKinsey Global Payments Map. In fact, it surpasses the United States by more than $100 billion.

As a payment transaction method, ApplePay is rising fast in the U.S. and beyond. In 2020, Forbes reported that:

A 2020 PYMNTS.com study also reported that ApplePay is on a major trajectory: 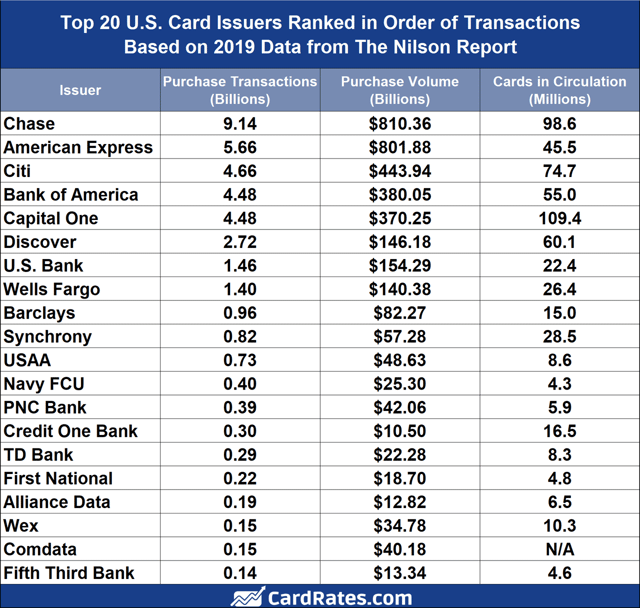 Credit cards have become an essential part of consumer life for Americans and consumers in other developed countries. The numbers show that credit card payments result in massive profits for the issuing banks, but cards are undeniably advantageous for consumers.

How to choose the right credit card so you get the best package of benefits while not sacrificing security is essential. Don’t just select the first card you come across.

The world is rapidly changing with contactless payments and other technology that makes spending easier. That’s why it is more important than ever to understand how to avoid getting into deep credit card debt. Knowing where, when, and how to use credit cards will help you build and maintain a good credit rating while accumulating the most helpful rewards and personalized advantages.

So, while debit cards are rising in popularity among some segments, the real perks — such as consumer protection and valuable rewards programs — are still mostly attached to revolving credit products — namely, credit cards.

Mobile payments and contactless transactions will continue to grow in popularity around the world, so focus on cards equipped with the most secure technology and beneficial qualities. Put them at the top of your list on your mobile device so you automatically defer to them.

Be sure to review your transaction history on a regular basis to make sure that you don’t become an unwitting statistic. The last thing you want is to acquire high-interest debt that you have a hard time paying off or be confronted with credit card fraud that will make your life more difficult.

To offset these possibilities, check your credit reports on a regular basis and monitor your credit scores to ensure that you are on the right track.

Could You Be Addicted to Credit Cards?