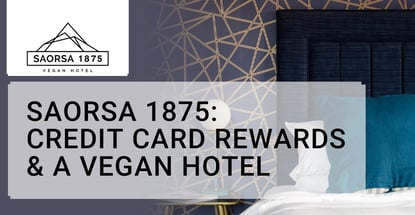 In a Nutshell: As a credit card-focused website, it should come as no surprise that we love finding novel ways to leverage our credit card rewards. And traveling to unique places frequently land at the top of our list of ideas. Saorsa 1875 is a luxury, vegan-friendly hotel in the Scottish Highlands that offers a one-of-a-kind experience in one of the most beautiful areas of Scotland. The hotel is nearly 150 years old but sports modern amenities for a comfortable and memorable stay. The high-end vegan restaurant features locally sourced and organic ingredients. And for each dinner served, the hotel offsets its carbon footprint by planting a tree via a partner organization.

While travel was halted for millions of U.S. residents for much of the last year, that doesn’t mean we haven’t been daydreaming about cashing in our credit card rewards for a unique getaway.

The COVID-19 pandemic disrupted the lives and livelihoods of millions of Americans last year. While the damage is undeniable, there are some silver linings we can hold onto as we await the full vaccine rollout.

One potential destination that we’ve batted about has been Saorsa 1875, a vegan-friendly luxury hotel in the heart of Scotland. Saorsa is a Scots-Gaelic word meaning freedom.

“Ensconced by two acres of natural woodlands and gardens and overlooking the town of Pitlochry, Saorsa 1875 is a unique hotel dedicated to showcasing ethical luxury,” according to the website. “Designed for vegans, vegetarians, and the plant-curious, Saorsa 1875 balances the building’s Victorian gothic origins with modern amenities to offer a unique experience.”

We wanted to learn more about this intriguing structure and the concept behind it so we reached out to Saorsa 1875’s Owner, Sandra McLaren-Stewart, to learn more.

As the name implies, Saorsa 1875 hotel was indeed built in 1875 as a private residence.

“That would have been the peak point when Queen Victoria was using this area as a holiday spot,” McLaren Stewart said. “We’re not far from Balmoral Castle and Glamis Castle. Queen Victoria made (this area) popular — Queen Victoria being a bit like the Kate and Wills of her time — so lots of people followed suit.”

McLaren-Stewart said that the region became the location for a number of holiday homes. Saorsa 1875 was built at the behest of an industrialist from Aberdeen, she said. And it remained a private residence until the end of World War II. 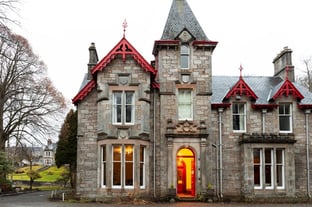 Saorsa 1875 features a mix of history and modern amenities in its vegan-friendly setting.

The structure was then purchased by a military officer who bought it for the Polish soldiers in his platoon who could not return home. By the 1970s, the former residence was converted to a hotel.

And in 2018, McLaren-Stewart purchased it and, along with her son, converted it into the modern, vegan-friendly hotel that it is today.

She said they updated the plumbing, heating, and wiring, and redecorated the hotel, but they left a lot of the original features as they were — for example, the hand-carved wood paneling that lines the hallway.

“The 19th-century baronial house has 11 bedrooms individually styled with a calming combination of luxurious linens, bohemian styling, and antique furnishings,” according to the hotel website.

And yes, it is all vegan-friendly, down to the toiletries.

“It’s no secret that some hotel shampoos and soaps make you dry and itchy,” according to the website. “We’ve partnered with local, ethical brands to ensure you’re left feeling soft, smooth, and smelling great. All of our toiletries are 100% vegan so you don’t even need to think about compromising your ethics.”

McLaren-Stewart said that she and many of her family members are vegan, and wanted to bring a vegan-friendly hotel and restaurant to the region. While she expected the project to appeal to a niche market, she said the positive responses have been overwhelming.

Although veganism is technically defined as a lifestyle seeking to avoid the use of any products that harm animals, it is of course primarily associated with one’s diet.

And McLaren-Stewart and Saorsa 1875 take a lot of pride in the vegan lounge and restaurant inside the hotel. And it’s certainly a differentiating factor for a dining establishment situated in the rural Scottish Highlands, where many people earn a living in the livestock trade, she said.

“We want to showcase what you can eat when you stay away from animal products,” she said. 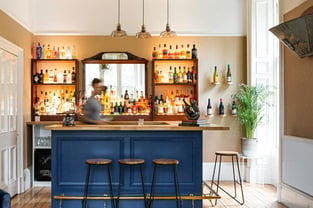 Saorsa 1875 isn’t a place where you can go order an Impossible Burger, however. It’s an upscale restaurant with carefully selected ingredients and professionally prepared meals.

“We’re all about sharing great food and good times,” according to the website. “With an ever-evolving menu inspired by our travels and delivered using local, ethical ingredients, we’re on a mission to prove that delicious food doesn’t have to come at the expense of animals or the planet. All our food is organic and sourced either from our garden or from local farms.”

The restaurant offers one dinner service per night consisting of a five-course set menu that changes daily. And for every dinner served, the hotel offsets the carbon footprint by planting a tree in conjunction with The Green Earth Appeal.

As with the restaurant, the hotel’s lounge, Faodail, isn’t your typical Highlands pub.

“Faodail specializes in good service, with delicious cocktails inspired by the past and executed with a proficiency in cutting-edge culinary techniques,” according to the hotel website. “Inspired by the history of the area and the natural surroundings expect something a little different to your usual highland bar.”

McLaren-Stewart said most of the leisure activities in the area are outdoor activities.

One of the most popular activities is to go munro bagging, she said. For those who may not be familiar with the term, munros are mountains in Scotland over 3,000 feet high.

“Munro bagging is a popular pastime in Scotland where walking enthusiasts challenge themselves to climb as many of the peaks as they can,” according to Visit Scotland. Scotland is home to 282 munros. 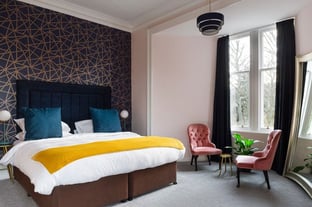 Each of the 11 bedrooms in Saorsa 1875 is unique and offers a one-of-a-kind experience.

“We have a big hydroelectric dam, which doesn’t sound exciting, but it is pretty exciting in terms of the technology used,” McLaren-Stewart said. “And then generally we are just in one of the most stunningly beautiful areas.”

Visitors can explore the natural beauty of the Pitlochry region and learn about its rich cultural history and wonder at the breathtaking scenery.

“Scotland is famed for its beauty and Pitlochry makes the perfect base to explore,” according to the website. “With Ben Vrackie, Black Spout Waterfall and Loch Faskally right on your doorstep, you’ll never be short of sights that will take your breath away. Adrenaline seekers will be hooked on the white water rafting, bungee jumping, skydiving, and climbing on Pitlochry’s doorstep.”

The area is home to plenty of popular events as well.

“From the world famous Etape Caledonia to the Enchanted Forest; the Highland Games to the New Year Street Party, Pitlochry is a bustling hive of activity all year round,” according to the hotel. “If it’s culture you’re after, Pitlochry’s Festival Theatre has a regular calendar of talks and events, including the Winter Words Festival.”

McLaren-Stewart recommends that most visitors bring a car during their stay.

“If you’re coming for more than a couple of days it’s nice to have a car because it’s nice to be able to go to Glen Coe and these kinds of places that are so iconic,” she said. “When you think of Scotland, you think Glen Coe, you think of stags walking down those hillsides, and you need a car to do that.”