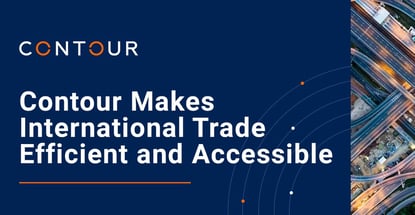 In a Nutshell: The $18 trillion-plus global trade market is one of the last holdouts to digital transformation in the financial system. But paper-based letters of credit that protect international transactions sometimes take weeks to process. Contour digitizes letters of credit through its decentralized network based on distributed ledger technology, saving time and money while ensuring all parties stay in sync. Contour makes global trade more efficient, opening up opportunities for more businesses in more parts of the world.

International transactions are more complex than typical face-to-face exchanges because distance and national borders separate importers and exporters. Importers would prefer to receive goods before paying for them, and exporters would choose payment in full before delivering goods. Not even instant payments can guarantee cross-border trades on those terms.

Singapore-based Contour set out to solve that dilemma through a digital platform that puts importers, exporters, and financial institutions on the same page.

Trade finance exists to protect buyers and sellers from harm associated with cross-border trade. For centuries, importers and exporters have used an instrument known as a letter of credit to guarantee transactions. Through letters of credit, banks acting on behalf of the importer and the exporter oversee the exchange and promise to ensure payment.

Because letters of credit are traditionally paper-based, importers, exporters, and banks often need weeks to exchange and reconcile them. Letters of credit also carry high overhead, so they’re relatively expensive, especially on the smaller end of the transactional scale.

Contour makes those letters of credit simpler and more accessible. The Contour network uses innovative distributed-ledger technology (DLT) to keep traders and their banks in sync digitally while allowing them to possess separate copies of documents. DLT protects importers and exporters from harm more efficiently than the paper-based system.

“A customer once told us they needed 10 days and 16 phone calls to amend a letter of credit the old way,” Contour CEO Carl Wegner said. “Now, it’s done in an afternoon.”

Contour transforms the letter of credit process by bringing buyers, sellers, and their banks onto a unified platform. Only the party physically possessing the letter of credit documents knows their status with a paper-based system. With Contour, instant document access and visibility ensure all parties stay on the same page from start to finish.

The buyer’s bank guarantees payment to the seller through the letter of credit. When sellers are unsure if buyers can fulfill their payment obligations, they request a letter of credit in the sales agreement.

“They’re usually used for large trades — commodity transactions in the millions where just a handshake may not do,” Wegner said. “But they’re also important in small transactions where the buyer and seller just don’t know each other and want to ensure the trade takes place.”

The conventional process begins when the buying entity applies at a bank where it has an account. The issuing bank transmits the letter of credit to the seller’s bank, which forwards it to the seller.

“By digitizing the process, we compress the timeline by at least two weeks,” Wegner said. “And everyone gains the transparency to see where the documents are and whose turn it is to act.”

Contour’s DLT network enables that time compression. The network is inclusive and interoperable among banking and corporate partners across the global trade ecosystem.

Contour launched as a pilot project with funding from eight major global banks. One of the founding team’s first decisions was to use R3 Corda as the tech backbone for the new system. Through Corda, Contour delivers a scalable DLT platform that houses the apps necessary to negotiate letters of credit.

Although forms of DLT underlie public blockchain networks, as delivered through Corda on Contour, DLT is proprietary technology. Only transactional parties share data, and international standards and regulations govern contracts executed on the system.

“It’s an indispensable tool because we’re managing information between banks and corporates that is highly valuable and confidential,” Wegner said.

In a way, it works similar to a shared electronic document in an office environment, where users see each other’s presence and activity in real time. But in that scenario, only one valid copy of the document exists, stored in a central database with a single owner.

With DLT, on the other hand, all parties to a transaction own and control their data and documents. What passes between transactional parties on Contour are instructions for editing and synchronizing separate copies as the letter of credit process proceeds.

That makes DLT ideal for trade finance — it delivers a streamlined process that remains accessible to all parties regardless of their internal rules, procedures, and regulations.

“Everyone owns their database,” Wegner said. “Data privacy and even geopolitical concerns mandate that you keep your data in your own country.”

Partnering with Banks for Financial Inclusion

In 2020, Contour progressed from proof of concept stage to the product stage, building a seamless user experience and financial-level legal infrastructure and security. In 2021, it went live. As of spring 2022, 17 banks and more than 120 corporations adopted the platform — which is available in more than 50 countries.

Contour’s speed and efficiency attract companies in high-dollar industries, including iron ore, petrochemicals, and transportation. It also attracts companies in sectors including retail and textile, where transaction sizes may be smaller.

The platform works because it transforms the letter of credit into a digital asset using DLT. Parties can resolve issues quickly because everyone understands the transaction’s status and who needs to act next. Negotiating discrepancies and amending documents happens efficiently on the unified platform while control remains local.

Contour offers buyers and sellers a future where letters of credit become more practical for guaranteeing global transactions. And firms — including smaller organizations in emerging markets — have fewer barriers to participation. It also enables banks to expand to new markets quickly.

And Contour envisions digitizing the entire trade journey because DLT applies to every part of the financial system where a digital asset can perform the role of a physical one. With the global trade finance gap approaching $2 billion annually and essentially shutting out tens of millions of small businesses, the need for a more rational global financial system to even the playing field is clear.

“We’re hoping we can help,” Wegner said. “Because if you can make financing cheaper and more efficient, more people can get financing.”