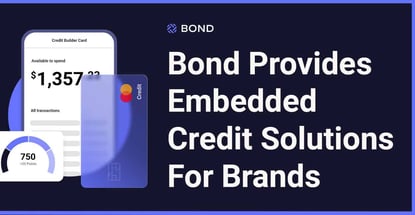 In a Nutshell: Bond is a leading banking-as-a-service platform that provides software and fintech businesses with APIs and program management to offer integrated financial products to their customers. Unlike other solution providers, Bond provides a single platform which enables a faster product launch time, no need to engage and sign with different sub-providers. The company offers a wide range of financial services products, including virtual and physical commercial charge cards that allow optimized payment flows for vendors and workers. Bond’s future initiatives include white-labeling its commercial charge card so SaaS companies can adopt them at even faster rates. Bond is a venture-funded company and is backed by top-tier investors including Coatue, Canaan, Goldman Sachs, and Mastercard.

Launching financial services products by non-bank companies has always been a complex and time-consuming initiative. The earliest days of fintech required tech companies to partner with a plethora of tech vendors in addition to a sponsoring bank to even launch a beta product. Two U.C. Berkeley classmates and friends, Roy Ng and Yan Wu, felt there had to be a better way.

After graduating, Wu went to work in the hedge fund industry focusing on data science and quickly noticed the infrastructure that goes into launching each new financial services product had to be very different, which made it difficult for a tech company to launch multiple products to grow.

Meanwhile, Ng joined Goldman Sachs after graduation. He then worked at a number of fast-growing software companies, eventually taking on leadership roles at Twilio, a leading developer platform for communications, as their COO and then later President and COO of a developer platform called Mapbox that enabled location awareness and mapping for software applications.

Ng and Wu could clearly tell there was a gap between what financial institutions can offer to innovators and what innovators needed to provide financial service experiences to their customers.

“The whole idea around API platforms is to take historically hard to access industries, like communications and mapping, and make it more componentized such that software developers can use those components and build uniquely differentiated software experiences,” said Ng.

As Ng and Wu researched the market, they realized that many tech companies wanted to offer financial services products but the process in which they had to partner with banks, processors, KYC vendors, etc., made it cost and time-prohibitive for most companies.

Bond was founded by Ng and Wu from this concept in 2019. The company offers a comprehensive platform that has the building blocks for debit, credit, consumer, and commercial services.

Companies that work with and integrate Bond’s modern API platform services are able to rapidly build, launch, and operate their own financial products. One such example is the recent announcement of WeWork Founder Adam’s Neumann’s new property technology platform, Flow, which is working with Bond to enable financial services for Flow’s residents.

About a year ago, Bond decided to focus its development and go-to-market resources on credit because, from a customer standpoint, it yields more attractive returns and adds more value to their end users.

The two key credit products that Bond is currently focusing on in the market are consumer secured credit cards and commercial charge cards.

A $500 deposit in the account means the account holder has a $500 credit limit immediately. From that point, they can spend against that amount, and at the end of the month, they get a statement and repay the total either through the security deposit account or through an external account.

If consumers continue that process for a number of months, they will start building credit because Bond, as the infrastructure provider, actually reports their repayment history to the three credit bureaus.

For Bond’s customers, which are fintech and software companies, this type of value-added service earns two times more interchange revenue than a debit card, more compelling economic value proposition than a debit card.

As the end consumer swipes the card, fintechs and technology companies are taking a slightly higher interchange share. That makes for a very attractive product.

The business commercial charge card functions as both a virtual card and a physical card, and it allows B2B SaaS companies to optimize payment flows for their workers and vendors.

One Single Platform For Seamless Integration

When looking to build a financial services product, it typically requires complex integrations not only with the sponsor bank partner, but also different tech vendors, often having to sign contracts with separate entities at each stage.

Unlike its competitors, Bond is one single platform, operating as a one-stop shop that does everything from helping implement the product to launching the product.

“We are also the program manager for your product, meaning that after you launch the product, we continue to help you monitor this program from a compliance standpoint,” said Ng. “We have all the tools that you will need and we monitor those transactions alongside you.”

This single platform system is effective on two fronts: It fosters a positive experience on the end user side and allows Bond’s brand customers to launch more quickly.

Bond generally quotes 90 days on average to go from signing to getting a product launched. If customers have already developed their user experience and have a clear idea of their product construct, then integrating with Bond’s API can go very quickly — possibly in as little as three weeks, since it would only require the technology side.

However, there is still a 90-day expectation because Bond will need to perform a diligence process with its brand partners before signing off. “For our customers that already have a very clear sense of what they want that product to be, the tech integration piece is fairly straightforward,” said Ng.

Another advantage of Bond is that it partners with different sponsor banks. Ng described this key differentiator of the platform as being bank-agnostic. “So we can kind of match which bank partner is most appropriate for that particular product the customer wants to launch and pair them with the right bank partner,” said Ng.

New Initiatives On The Horizon

Bond currently is focused solely in the United States. Ng believes, however, that the US market is still largely underpenetrated.

According to a Bain & Company report, embedded finance as a category in 2021 accounted for 5% of total US financial transactions, or $2.6 trillion.

The vast majority of that $2.6 trillion is still on the merchant acquiring side. Ng explained that the issuing side, which involves offering banking and cards to end users, is still underpenetrated.

Ng said that Bond is working on a number of exciting initiatives in response to that untapped market potential. One of them is a white-label initiative.

“We want to white label, firstly, a commercial charge card, because we see that for software companies, they may not have all the time or the development resources to basically go build it directly from the API level,” said Ng. “Time to market is critical for many of our customers.”

The company is working on a hosted, white-label product that will be launched for SaaS companies to adopt that white-label commercial charge card more quickly, rather than having to build it from scratch.

Ng believes it will be a game changer, the company plans to take this white-label approach across many of its different products.

“To the extent that some people want less customization but value timing to launch, that’s a really good solution for them,” said Ng. “Overall, we’re just very excited about this space, and I think it’s just very early innings right now.”