Tax Policy Center™ Serves as an Independent Watchdog for U.S. Leaders and the Public on Tax and Budget Policy 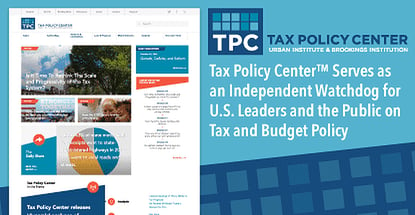 In a Nutshell: The Tax Policy Center provides expert advice and analysis on current and proposed tax legislation to educate taxpayers and hold policymakers accountable. The experts at the Tax Policy Center have considerable experience in tax, budget, and social policy earned from years of service at the highest levels of government. Their research, modeling, and interactive tools give the public timely, accessible information to better understand a complex tax code and the effects of changes to tax laws. //

Love it or hate it, one of the most important pieces of legislation of the past decade is the Patient Protection and Affordable Care Act (ACA), which, among other provisions, required that most U.S. citizens and legal residents have health insurance. When the bill was rushed through the Senate just prior to Christmas in 2009, pundits and the public marveled at how such a major piece of legislation could pass when, by their own admission, few, if any politicians had actually read the bill in its entirety.

In fact, one of the principal architects of the legislation, Senator Max Baucus (D-Mont.), acknowledged he had not read it either. Doing so, he said, would be a “waste of time” since only experts could be expected to understand it.

Enter the experts: the staff, researchers and advisory board of the Tax Policy Center, a joint venture of the Urban Institute and the Brookings Institution. The TPC’s aim is “to provide independent analyses of current and long-term tax issues and to communicate its analyses to the public and to policymakers in a timely and accessible manner.”

Their mission is an important one. Consider that the U.S. Tax Code is nearly 75,000 pages long. Filing tax returns has become so complex, that the National Taxpayer Union Foundation (NTUF) released a study in 2015 estimating that the U.S. economy lost $233.8 billion due to 6.1 billion hours of lost productivity and $31.7 billion in out-of-pocket costs just trying to comply with the tax code.

The Tax Policy Center helps U.S. leaders understand the complexities in changes to the tax code.

Why is it so complex? Our current tax system is not designed simply to collect the revenues needed to run our country, but to encourage a broad range of social and economic activities, from buying a home and having children to purchasing a hybrid vehicle and, yes, even health insurance.

Each of those tax credits, deductions, and exemptions make understanding tax law harder, as each tax break comes with its own separate tax form, instructions, regulations, and other paperwork. According to NTUF, the ACA alone added 3,322 pages of legal guidance to IRS.gov.

So it’s no wonder that policymakers and the public need a little assistance in interpreting the tax code and understanding the effects of possible changes in fiscal policy.

To help policymakers and the public make informed decisions, the Tax Policy Center provides several resources. First, they provide research and commentary on existing and proposed tax policy affecting individuals and businesses on a federal and state level.

For example, consider the tax proposals offered by presidential candidates. One candidate might promise to reduce tax rates and put a cap on itemized deductions. Another may propose raising taxes on high-income taxpayers and increasing the child tax credit.

Depending on an average taxpayer or legislator’s political leanings, one or both of these proposals may sound appealing, but what is the real impact? Few taxpayers are well-versed enough in the tax code to analyze the consequences thoroughly. Most policymakers wouldn’t have time, even if they did have the expertise. Many have neither.

Instead, they turn to research and commentary provided by the researchers and staff at the TPC, who are experts in tax expenditure and budget policy. These experts translate a complex analysis of each candidate’s proposal into accessible and engaging language, allowing readers to not just read the plans, but understand what effect the changes in tax policy would have on revenue collection, the federal deficit, labor supply, the economy, and the current complexity of the tax code. 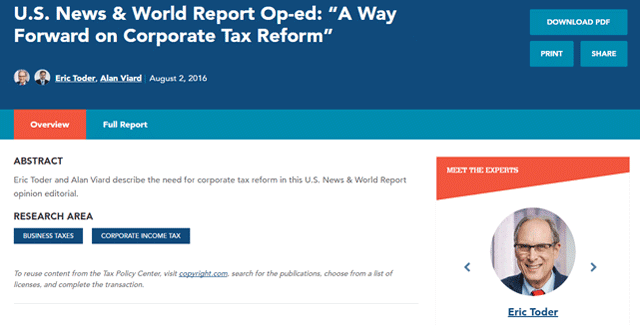 Taking the research a step further, the TPC provides model estimates of every major individual income tax bill and proposal. In election years, they work with representatives from major campaigns to gather enough information to analyze the impact of tax proposals and combine that with data collected from the Statistics of Income Division of the Internal Revenue Service.

The Tax Policy Briefing Book — A Primer on Our Tax System

Have you ever had a question about how much of our government is funded by individual income taxes, how much of the federal budget goes to Social Security spending, or how much the “one percenters” actually pay in taxes each year? You could Google each and every one of your questions and try sorting through thousands of search hits for each one, or you could look at the TPC’s Briefing Book.

The Briefing Book is a collection of questions and answers covering just about every tax and budget policy, prepared by staff and researchers at the TPC.

The book is organized into four topic areas: background, key elements of the U.S. tax system, possible reforms, and state and local income taxes. Each area includes short, easy-to-read explanations of important tax issues. It also includes a glossary of relevant tax policy terms, so taxpayers can understand what the candidates are talking about when they mention VATs and corporate tax inversions during the debates.

The Interactive 2015 Form 1040 gives insight into what is behind the tax form. What does each line mean? How many tax returns are filed with an entry on each line? This tool includes an interactive Form 1040 and Schedule A, the form used for itemizing deductions. To use this tool, just hover your cursor over a section and click to bring up a box with additional information.

Low-income families often face tough decisions between finding employment and losing out on safety-net programs such as Temporary Assistance for Needy Families (TANF), Supplemental Nutrition Assistance Program (SNAP), housing vouchers, child care subsidies and other federal and state assistance programs. If the family earns more money, how much will their benefits from safety-net programs go down? The Net Income Change Calculator lets the user test different scenarios and shows results for all 50 states and the District of Columbia.

Each presidential candidate has promised significant changes to tax policy. The TPC teamed up with Vox Media to create the Vox Presidential Tax Calculator to show how each candidate’s plan would affect the taxes Americans pay. This simple calculator just asks for your household income, marital status, and number of dependents. Click the “submit” button and the calculator shows you about how much more or less you’d pay under each candidate’s plan.

A Think-Tank of Experts Focusing on Tax Education

Our tax policy is complicated. Without the work of the experts at the Tax Policy Center, politicians would be able to make outrageous promises that the average taxpayer would be unable to fact-check. The TPC is comprised of nationally recognized experts in tax, budget, and social policy.

Consider the ACA. The Congressional Budget Office initially figured the health care reform bill would reduce the federal deficit by about $132 billion from 2012 to 2019. Writing for the TPC, Howard Gleckman compared that projection to a study from the Mercatus Center at George Washington University concluding that the ACA would add at least $340 billion to the federal deficit from 2012 to 2021.

While Gleckman correctly pointed out that there is no easy answer to the question of who is right and who is wrong, the experts at the TPC have been working to help taxpayers and legislators consider all sides of the healthcare issue since the center was founded in 2002.

Their goal is simple, “to ensure that everyone has access to accurate information about how our tax system works and how changes in our tax code will affect taxpayers and the federal budget.” That is no easy task, but taxpayers and policymakers alike are fortunate to have the expertise available for understanding and analyzing a variety of tax issues and their impact.