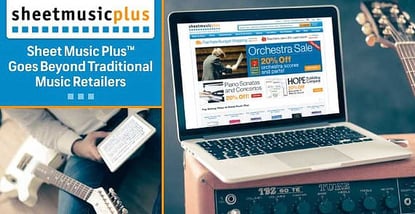 In a Nutshell: Twenty years ago, students, teachers, and professionals in need of sheet music were limited to whatever was sitting on the shelves of their local music stores. Along came Sheet Music Plus, an online company that now sells more than 1 million printed sheet music titles and 250,000 digital downloads, giving musicians a nearly unlimited supply of new material. SMP Press and ArrangeMe, self-publishing platforms developed by Sheet Music Plus, were born out of a constant desire for new variations and new instrumentations in sheet music. SMP Press gives composers the opportunity to monetize their work on original and public domain sheet music, while ArrangeMe provides a list of more than 1,000 pre-approved, copyright-protected songs that composers can legally arrange and sell. Thanks to the efforts of Sheet Music Plus, high-quality sheet music has never been more accessible.

Jenny Silva remembers browsing her local music shop as a young girl in Sacramento, California. The now-closed Jack’s House of Music had three shelves of sheet music, and Jenny would flip through the 200 or so available titles hoping to find a certain song for one of the three instruments she was learning to play, only to be frequently disappointed. 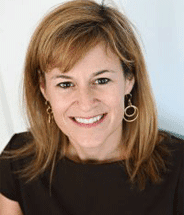 Jenny Silva, the CEO of Sheet Music Plus, is always looking to add new titles to a list of more than 1.25 million print and digital offerings.

Today, Jenny is the CEO of Sheet Music Plus, a company that offers more than 1 million titles of printed music. Now, budding young musicians have nearly limitless options without leaving home. And with more than 250,000 digital sheet music downloads, they might not even have to wait for delivery to begin diving into a new song.

The demand for more sheet music titles drove the company’s origin story and continues to spur its growth confirming its title as the “World’s Largest Sheet Music Selection.” Before attending business school, Sheet Music Plus Founder Nick Babchuk co-owned a music store in Los Angeles. During his time running the store, Nick learned that accessories drove the most sales.

So when he started a website in 1996, it was originally branded as MusicianStore.com. The site focused on accessories, from guitar strings to drumsticks, and sheet music was just one of the categories.

“Very quickly after it launched, he realized that sheet music was where it was at online because people valued a really large selection,” Jenny said. “It was hard to carry a large selection in a retail shop.”

“Even with as large of a selection as we’ve got, our request has always been for more music and more variation.” — Jenny Silva, Sheet Music Plus CEO

So the company rebranded as Sheet Music Plus. As time went on and the company became more successful, Nick found it difficult to carry a large enough selection in his office in San Francisco. Two offices later, Jenny and the Sheet Music Plus team are working out of a 25,000-square-foot warehouse in Emeryville, California, where trucks can easily get in and out to make deliveries.

To this day, Sheet Music Plus is finding ways to expand its offerings for musicians. Digital downloads were introduced about five years ago, and they now make up about 35% of orders on Sheet Music Plus.

Sheet Music Plus Provides Unique Platforms for Songwriters to Shine

Sheet Music Plus is essentially for musicians, by musicians.

“A lot of the people who come to work here are attracted to [the company] because music is an important part of their life, and they like having that be part of their professional life, too,” Jenny said. “We’ve got a few folks here who teach or they do some sort of professional music on the side.”

Another way Sheet Music Plus helps musicians, besides employing them, is with self-publishing platforms that help them monetize their work on sheet music.

In response to the constant drive for new sheet music titles came SMP Press, which gave composers a place to sell their arrangements of original and public domain music. Now, musicians have a site where they can earn up to 45% in royalties for their digital sheet music and MP3 titles while gaining worldwide exposure for their work.

The rapidly growing program provides a way for arrangers to get their music out to the masses without having to convince a traditional music publishing company to print their arrangements. This creates a lot more options for every level of musician and nearly any type of instrumentation, which is extremely valuable for music teachers. 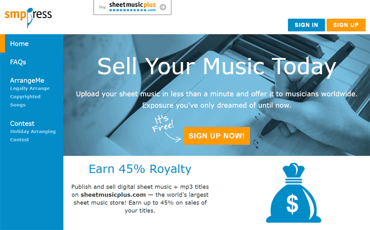 SMP Press offers composers a chance to profit from their work on original and public domain pieces.

A music publishing company would have to be sure it could sell thousands of copies of an arrangement for them to want to invest the time and effort into a project. Even the most popular songs will likely only get a piano or choral arrangement.

For example, Jenny’s son was getting into piano and wanted to learn Sergei Prokofiev’s “Peter and the Wolf,” but all of the arrangements were too complex for him. So his music teacher took existing arrangements and created a simplified version for him to tackle.

“My son wasn’t the only beginning pianist who wanted to play ‘Peter and the Wolf,’ but it’s not a high enough demand piece that the traditional publishers would have done that arrangement,” Jenny said. “Now, we have a lot of songs like that on SMP Press.”

SMP Press expanded near the end of 2015 with a new angle on self-publishing.

Songs that are copyrighted (most songs released in the last 75 years) must have permission from the copyright holder in order for a musician to create an arrangement. This is a challenging process for individual musicians that is both expensive and time-consuming. Sheet Music Plus has worked with Hal Leonard, one of the largest sheet music publishers in the world, to develop a list of more than 1,000 songs that have been pre-approved for arrangement, taking the legal legwork out of the equation.

This pre-approved list of popular music can be legally arranged and sold through the ArrangeMe program. Sheet Music Plus manages the payments to copyright holders through Hal Leonard, giving musicians more time to focus on creating ear-pleasing arrangements.

The ArrangeMe Song List has more than 1,000 pre-approved, copyrighted songs that can be legally arranged and sold.

Because there are resources devoted to getting proper clearance for copyrighted music and the copyright holder needs to be paid, composers earn a 20% royalty on ArrangeMe pieces.

Finding a Niche — Catering to Teachers & Students Has Spurred Growth

A large part of the customer demographic are studio teachers and music educators, and Sheet Music Plus does its part in fostering that relationship with an Easy Rebates program that has more than 60,000 teachers enrolled who are taking advantage of an 8% rebate on purchases. 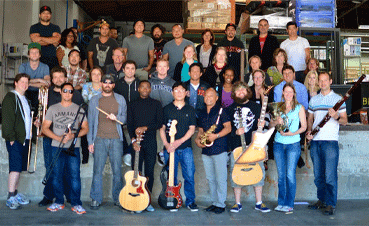 Many of Sheet Music Plus’ employees are musicians themselves, which gives them a better understanding of the needs of music teachers and students.

“A lot of what we’re doing is supporting the music educator and trying to make sure they have the tools they need to spread music to the next generation,” Jenny said.

The beginnings of semesters are always the peak time of the year for Sheet Music Plus because of the demand from teachers and students in need of resources. The warehouse in Emeryville tends to be a little more full than usual these times of year to ensure fast deliveries for the young minds eager to begin learning new material.

“We greatly increase the number of titles that we have in just so they are able to get them right away, and their students aren’t having to wait to move forward on their music,” Jenny said.

Thanks to SMP Press, studio and classroom music teachers also have access to unique arrangements and instrumentations that would be otherwise unavailable.

Jenny has never forgotten her childhood disappointment in the limited options of printed music she had in the store, but thanks to Sheet Music Plus, it’s a problem of the past.

Now, she plays a major role in trying to procure every available sheet music title so young musicians and teachers have their choice of whatever material they want to play. And with self-publishing platforms, like SMP Press and ArrangeMe, the options for professional musicians go beyond what traditional music publishers are offering.

“That’s what we’re trying to change is that whatever you want to play, we want to enable you to play it,” Jenny said.

The mission statement of Sheet Music Plus is “making the world’s music more playable,” and with the availability of more than 1 million print titles and 250,000 digital downloads, Sheet Music Plus puts that mantra into action.