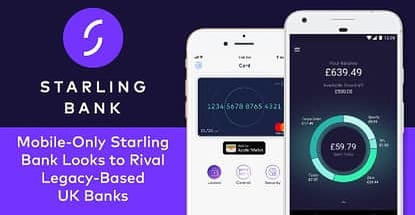 In a Nutshell: Traditional banks use legacy systems to provide an operational foundation with proven success. But these costly systems lack the agility needed to adjust to a changing marketplace. While many institutions spend billions of pounds each year to roll out their digital initiatives, Starling Bank spent only £15 million to create the infrastructure of one of the UK’s fastest growing financial institutions. The mobile-only Starling offers individual and business checking accounts and a feature-rich platform that provides constant access to accounts, real-time accounting of funds spent and received, and the ability to set savings goals for purchases of any size. //

One of the hardest lessons people learn over time is that it’s okay to be different. Peer pressure often persuades consumers to wear certain brands of clothes or drive particular models of cars that otherwise wouldn’t have caught their eye. Fitting in can be comforting — at the cost of both time and opportunity.

In the business world, no one has ever gotten ahead by blending in. When Jeff Bezos wanted to start an online bookstore in his garage, people said his idea and its name — Amazon.com — made no sense. People laughed and dismissed Bill Gates when he declared that the big money in the tech world was in software and not hardware.

And when Anne Boden left a comfortable job at Allied Irish Banks to start her own financial institution, people thought she was swimming into waters deeper than she could handle.

But, like many other innovators, she didn’t want to swim in the same old school of thought.

Boden’s creation, the mobile-only Starling Bank, is one of the fastest-growing banks in the UK and offers individual and business checking accounts with real-time accounting through a mobile application available on Apple and Android devices.

“(Boden is) a computer scientist by training and got frustrated when she became aware of all of the things digital technology could do, but she couldn’t get (those things) introduced in a traditional banking setting because it’s hard to build something new and workable on top of legacy systems,” said Alexandra Frean, Head of Corporate Affairs at Starling Bank.

So, while banks throughout the UK remain tied to those costly systems and spend billions of pounds each year on digital initiatives meant to make them relevant to today’s marketplace, Boden built Starling’s entire infrastructure for £15 million.

And with a current staff of 180 employees, many of whom are engineers who work on the bank’s mobile infrastructure, Starling is rising in the ranks of UK banking heavyweights while spending a fraction of what her competitors spend. That savings, Frean said, gets passed on to the customer.

“Our starting point is to put the customer first and try to think of banking from the customer’s point of view,” she said. “We look at what the customer will want to do with the service and the features they want, then we go back and figure out how to deliver that.”

Starling’s goal, she said, is to help people have a healthier, happier relationship with their money.

Boden also understands her role as CEO of Starling is significant in a male-dominated industry. To further the cause of gender equality in finance, Boden joined the government initiative, Women in Finance Charter, whose objectives, among other goals, is to have females make up 30% of Starling’s senior management by 2021.

In many ways, Starling is one of the UK’s first anti-bank thanks to its strategy of doing away with aged systems and conventional thinking that hamper institutional growth. Instead, the company focuses on driving innovation that will bring European financial services into its next evolution.

Frean said that as long as an applicant doesn’t have severe credit issues, signing up for a Starling Bank account takes less than five minutes. Applicants must use their phones to snap a photo of an identification document (think passport or driver’s license), record a brief video of themselves to prove their identity, and upload both to Starling’s servers.

The app sends push notifications any time money enters or exits an account. Real-time balance updates on the interface reflect every deposit or purchase. Categorized spending also helps users get an idea of where they spend the most money.

Any bank that does away with brick-and-mortar branches in exchange for constant account access via a mobile device must have features to keep users engaged.

The Goals feature lets users create a savings pot within their account to save for a purchase  — anything from a holiday to a new pair of shoes. Users can upload an image to identify the savings account so they see what they’re saving for and transfer money at any time by simply moving it over in the app. 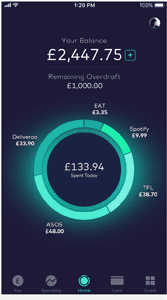 The Starling Bank app allows users to see a categorized breakdown of their spending.

“You get to see that money grow over time,” Frean said. “It’s a visual way to help people put money aside for a purchase that’s important to them. You still have access to that money in case you need it for an emergency or to pay a bill, but this lets you grow your savings in a very visual way.”

The Settle Up feature makes it easy to split the check at a restaurant or request payment for a debt without sharing private account details. Starling recently added the feature to the app after a flood of customer requests for the functionality.

“Say you’re out to dinner with one of your friends, and you want to split the bill,” Frean said. “Simply set the amount, add a message, share the link with your friends — even if they don’t use Starling — and get paid back — fast and hassle-free.”

Users also have the ability to block gambling and betting merchants, which creates a layer of friction to help them resist the urge to wager their money. Users can remove the block at any time from the app.

“These features fit in with our goal of helping people have a better relationship with their money because they can keep people on top of their finances,” Frean said. And Starling is constantly rolling out updates to keep its customers financially in control and happy.

Peer pressure can impact even the most mentally strong individual. Whether you get caught up in the latest dance craze or eating a weird food that a chef on TV swears is all the rage in a remote country, there’s a time and a place when it is OK to follow the crowd.

But when it comes to banking, and private financial transactions, there’s nothing to gain by being like everyone else. Traditional banks and their legacy systems were designed to meet the needs of yesterday’s bank customers. Today’s retail and business banking customers, who are looking for new ways to increase their savings and the control they have over their savings, often turn to mobile banking for always-on account access.

For Anne Boden, the switch from running operations for traditional banking giants to creating a trailblazing mobile financial startupmay well lead to a sea change in fintech and retail banking. The consumer response to Starling’s digital, mobile-only service has been extremely positive and spurred the bank to create new features designed to continue its growth.

At this pace, Brits everywhere may be starting a new trend of moving to mobile-only banks like Starling.