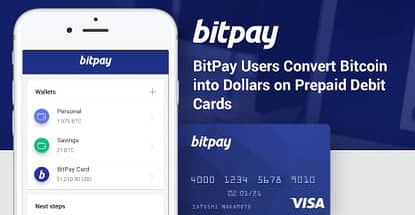 In a Nutshell: Bitcoin’s value explosion is unlike anything seen in the financial market in several decades. As prices surge past $10,00o per coin, the number of retailers accepting the currency as payment only moderately rises. To combat that, BitPay developed a system that converts coins into dollars and instantly loads the value onto a prepaid debit card that can be used anywhere Visa is accepted. The card experienced nearly 700% growth in 2017. In addition to the card, BitPay also offers a highly secure Bitcoin wallet and merchant services that give retailers the ability to accept coin at a low 1% transaction fee. //

On May 22, 2010, Jacksonville, Florida, programmer Laszlo Hanyecz paid a fellow BitcoinTalk forum user 10,000 BTC for two Papa John’s pizzas. An overused joke during the currency’s 2017 value explosion reiterates how much that transaction is worth in today’s market ($119,585,800 if you’re keeping track).

That same 10,000 BTC now could purchase 98,505 shares of Amazon stock, the most expensive home ever sold in Los Angeles, or 905,720 large pepperoni pizzas from Papa John’s.

More than 10,000 retailers and service providers currently accept Bitcoin. That number hasn’t increased as rapidly as the price of the tokens, much to the frustration of early adopters.

BitPay hopes to solve that problem with its reloadable prepaid debit card issued by Visa. By using Visa’s mobile interface, cardholders, in a matter of seconds, convert some or all of their Bitcoin holdings into dollars. Those funds can then be used immediately wherever Visa is accepted. 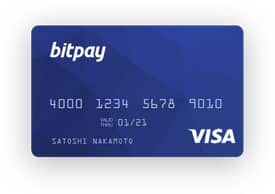 The BitPay Prepaid Debit Card allows users to convert Bitcoin into cash to use anywhere Visa® is accepted.

“If you’re using a good, modern Bitcoin wallet, it’ll take seconds-to-minutes for the money to arrive on your card,” said James Walpole, Marketing & Communications Manager at BitPay. “You could be standing in line and swipe on your phone to convert Bitcoin to funds on your card and have confidence that the funds will be on your card by the time you reach the checkout stand.”

The card’s introduction is helping revolutionize an industry drowning in attention but lacking widespread acceptance.

“The card is an easy way for people to use Bitcoin in a world that’s not quite ready for Bitcoin,” James said.

Skyrocketing values sparked an increase in card demand. Currently available through online order only, the company issued approximately 6,000 cards by the end of 2016. Less than a year later, more than 40,000 cards are active worldwide, aided by the introduction of an international version in May of 2017.

“One of our key metrics is transaction volume — How much money are we processing daily, monthly, and yearly in Bitcoin payments?” James said. “That includes payments sent to the card as well as payments sent to our merchants. We’re on track for $1 billion in payments this year.”

Live Life on Bitcoin Without the Hassle of Bank Transfers

Users believe that overcoming the hurdle of how to securely store Bitcoin will unleash mainstream consumer acceptance. With coins mostly stored in online wallets, users entrust the companies hosting those wallets with their entire investment. Reports of millions of stolen coins from servers — along with online anonymity that makes it nearly impossible to recover those losses — scare away many potential customers and merchants. 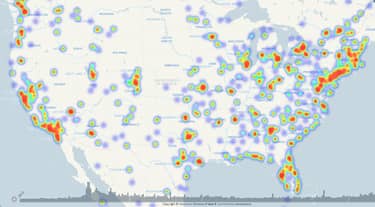 This heat map shows areas where Bitcoin is accepted as payment in the US.

The company offers its own Bitcoin wallet with security features important to veteran coin users and new investors. These include the ability to buy and sell Bitcoin directly through the interface. The digital storage program is available on most operating platforms and can be linked directly to a BitPay card for easy transfers and conversion.

The team of programmers in Argentina who maintain the wallet believe so strongly in the currency that it recently asked Bitpay to convert their salaries into Bitcoin instead of Argentine pesos.

“That’s a good illustration of the struggles that some currencies have and how Bitcoin can help them,” James said.

It also demonstrates the ability for Bitcoin to be a standard international form of payment that provides near-instant availability of funds in many currencies.

“If you need to make a large purchase or pay your rent, you can wait two to three days for a bank account to transfer it to the person you’re paying,” James said, “or you can load your BitPay card and make the payment in less than a half hour. It’s a powerful example of how fast money can move”

Solutions for Merchants to Accept, But Not Hold, Bitcoin

The days of excitement from paying for a pizza with Bitcoin are over. Today, the currency’s average daily transactions typically surpass 250,000. Most of those transactions are person-to-person, with many global retailers slow to take on the task of handling the new currency.

“A lot of businesses don’t want to hold Bitcoin because of the price volatility, plus there are tax and accounting issues like you’d expect from any new currency,” James said.

BitPay’s goal is to make it easy for businesses to accept Bitcoin without dealing with those drawbacks. The company’s merchant payment portal helps both consumers who want to see the coin become commonplace, and retailers that want to diversify their clientele.

A look at how sharply Bitcoin transactions have spiked since 2009.

“Merchants get all the benefits of their regular payment system,” James said. “There are no problems with credit card fraud or identity theft. They don’t have to understand Bitcoin or be exposed to its price volatility. BitPay gives them exactly what they charge in their own currency, minus a 1% transaction fee.”

The fee is less than the typical 3% charged by most credit card processors. James says the company has “a few hundred thousand” merchants currently using the system and feedback has been positive. Chargeback fraud and identity theft are virtually impossible through the system, and transactions are quickly settled through deposits to bank accounts in most major currencies.

“One thing that Bitcoin does really well is that it eliminates the kind of fraud that exists with checks and credit card payments,” James said. “You have to have the funds in order to initiate a transaction. It’s like digital cash that acts as a credit card payment.”

BitPay Allows Cardholders to Cash in on the Bitcoin Boom

In the seven years since Laszlo Hanyecz’s purchase of two pizzas for 10,000 BTC, the world has watched digital currencies multiply, and evolve, and explode into something no one could have predicted.

The trade even has its own holiday. Every year on May 22, currency enthusiasts celebrate Bitcoin Pizza Day. Retailers get in on the game with pizza coupons or deals for customers who use Bitcoin to pay for their transactions. To add to the irony, some Papa John’s locations have started accepting Bitcoin.

James and his co-workers said they feel they’re on the ground floor of a market that will only grow as consumers and retailers understand the true power of the currency.

“A lot of people only see the Bitcoin price,” he said. “The reality is that Bitcoin has become increasingly useful as a payment method. It solves problems that traditional payment methods aren’t good at solving — especially in the area of international and online payments and prepaid.”