Moving Beyond Strips and Chips: Aite Group’s Tiffani Montez Weighs in on the Future of Contactless Credit Cards 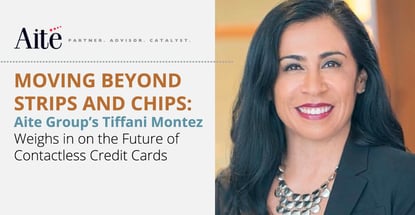 In a Nutshell: In recent years, EMV chips in credit cards have replaced the familiar magnetic strips as the primary means of payment. And just as U.S. merchants and consumers have begun to settle into using chip cards, contactless cards are emerging as the next payment trend. We recently spoke with Tiffani Montez, of the Aite Group, about the future of contactless technology in the U.S. Montez is a Senior Analyst with the research and consulting firm and recently published the report, “Contactless Cards in a Digital Age.” Her report revealed that consumer behavior will be a primary driver in the adoption of contactless cards. And card issuers and merchants must support this adoption by adequately educating consumers about the convenience and security of the technology.

At some point in the past few years, you probably received a credit or debit card with an EMV (Europay, Mastercard, Visa) chip in it. And instead of the tried-and-true card swipe, merchants began asking you to insert your card into a chip reader.

While some people (me) have complained that using chip readers can be slow and less convenient than swiping credit cards, the truth is, they offer more security than magnetic strips. They protect consumer data and help merchants guard against fraudulent charges they may be held responsible for.

Now — just as people are getting accustomed to chip cards — contactless credit cards are right around the corner for many merchants and consumers.

So, what’s the scoop on contactless cards? And why do we need them?

We spoke with Tiffani Montez, a Senior Analyst at the research and consulting firm the Aite Group to learn more. Montez studies digital channel interactions, marketing analytics, financial wellness, and other tech trends closely. She also recently published the report, “Contactless Cards in a Digital Age.”

Montez said contactless cards have already become much more common in other global payment markets, but they haven’t quite taken hold with U.S. merchants yet. She chalked this up to hesitation to invest in yet another card technology so soon after shifting to chip cards.

“I will say, I think there is becoming much more awareness about what a contactless card is, and people are realizing how they can actually save time when they’re checking out at a merchant,” she said.

Montez’s methodology for her report included interviews with a variety of professionals in diverse payment industry roles, survey results from executives at top U.S. financial institutions, and data from Visa, Mastercard, and other government and private entities.

For those who aren’t familiar with the term — contactless cards are pretty much just what they sound like. They are credit cards that use near-field communication (NFC) technology to transmit your data from the card to a terminal. 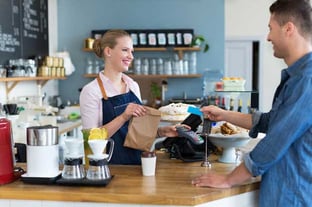 The speed and convenience of contactless credit cards can lead to improved customer experiences.

Some cards are simply held in close proximity above a terminal, while tap-to-pay cards are lightly tapped on the terminal (yes, this is technically contact, but please don’t be so picky).

While the implementation of contactless cards is lagging in the U.S. when compared to other markets, Montez said in recent months the tides have begun to turn and some issuers are now making a mad dash to employ the technology.

“I would say, right around the beginning of this year is when we started to see some early indicators of greater interest in contactless cards,” she said. “One of them was when Wells Fargo announced that it had a new tap-to-pay card.”

JPMorgan Chase also announced that it has issued 20 million contactless cards, and the cardholders can use them to tap and pay for subway or bus fare in New York City. And Visa indicated it expects about 100 million of its cards to be contactless by the end of the year, Montez said.

Because of their faster and frictionless transactions, contactless cards can result in more positive experiences for customers.

Contactless cards also maintain high levels of security. And another important factor in the technology being more widely adopted lies in dispelling myths about its vulnerabilities, according to Mastercard.

The card issuer reports that thieves cannot easily electronically pickpocket contactless cards. And in the event that a thief does acquire the card information, the advanced encryption employed by contactless cards make them extremely difficult to counterfeit. Additionally, there is very little risk of identity theft because the cards do not transmit cardholder information such as names or addresses.

Consumers Will be the Primary Drivers of Adoption

In “Contactless Cards in a Digital Age,” Montez concludes that the financial services industry has reached a point where banks are more willing to reduce reliance on physical cards and help consumers move into the world of digital payments.

Contactless cards, with their speed and convenience, are an important part of this transition, but the industry must do its part to usher in the technology because it will not progress if consumers aren’t willing to use it. 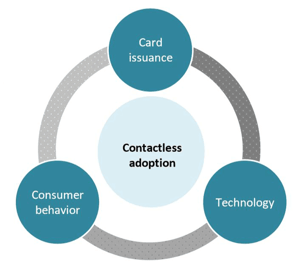 Montez’s research asserts that consumer behavior will be the primary driver behind the adoption of contactless cards.

She said consumers have not yet been thoroughly educated about contactless cards but as card issuers and merchants continue to spread the word, adoption will increase.

Consumers will also need to see the technology in action.

Again, as with the adoption of any new technology that deals with sensitive information, security is a top concern for consumers, she said.

“That means that FIs (financial institutions) need to devise a strong value proposition for contactless cards, ensuring that the process of using a contactless card is easier than that of using an EMV chip or a digital wallet, and making sure that consumers understand that fraud protection is just as good, if not better than EMV,” Montez wrote in the report.

“Inertia along with security are always the two killers of adoption,” Montez said. “People just want to keep doing things the way they have always done them unless you can demonstrate there’s value in doing something differently.”

That’s why — while consumer behavior will drive adoption — card issuers must set the consumers up to be open to adopting contactless cards.

“(Card issuers) will need to focus on outlining their contactless card issuance strategy and understanding the technology and its impacts on customer behavior,” Montez wrote.

She recommends that executives begin developing their strategies with a few key points in mind.

While the U.S. market is primed for contactless cards, merchants and card issuers must educate consumers about the technology.

First, card issuers should begin by testing the waters with small consumer groups to gain an understanding of initial concerns and barriers to adoption. This can be done by reissuing expired or replacement chip cards with contactless cards.

Companies should also consider particular demographics that may see an immediate benefit from the new technology, such as metropolitan areas with mass transit or other areas where merchants need to move customers quickly through the line.

Effective marketing and educational campaigns will also be essential.

“Consumers may wonder why they are being given a new payment option and why they should use it,” Montez wrote. “Card issuers should make sure they communicate that this method is faster, easier, and secure — the three things that consumers care most about.”

Montez also advises card issuers to have what she calls a failover plan. This means keeping the more familiar EMV chips and magnetic strips on cards in the event the contactless card technology fails for any reason. The customer will feel secure that there is a backup plan.

While Montez’s research indicates that the U.S. market is primed for more widespread adoption of contactless cards, it is crucial that card issuers and merchants do their part to educate consumers about the technology.

In the meantime, Montez said she’s studying other trends in the payment space, including the issuance of metal credit cards.