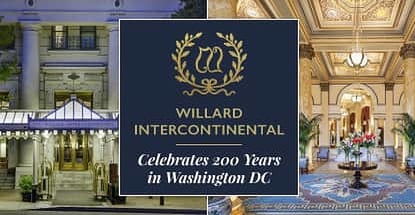 In a Nutshell: Anyone who has visited Washington, DC, knows there is no shortage of history within the city’s borders. But among the monuments, museums, and memorials is the Willard InterContinental Hotel, which has been home to as many historical moments as any building in the District. Located two blocks from the White House, the Willard has earned the moniker “The Residence of Presidents” for its record of hosting dozens of US presidents over its 200-year history. The hotel’s Round Robin Bar is the longest-operating bar in its original location in Washington, DC, and features a host of craft cocktails named after the Willard’s famous past guests. A visit to the Willard can be closer, and cheaper, than you may think when you use your credit card rewards. //

Washington, DC, has no shortage of history residing within its borders. While most think a majority of the history rests inside the White House, just as many stories — if not more — can be told about a building two blocks away.

The Willard InterContinental Hotel isn’t surrounded by gates and guards and constant protestors — unlike its more noteworthy neighbor to the west. In fact, the Willard is one of the most welcoming buildings in the city and has hosted historical figures from all over the world during its 200-year history.

In 1963, Martin Luther King, Jr., sat in the lobby at the Willard and made final edits his “I Have a Dream” speech, which he would deliver just hours later during the March on Washington. Nathaniel Hawthorne once wrote that the Willard was more the center of Washington than the White House or the Capitol.

In fact, it’s the Willard, not the White House, that has earned the moniker of “The Residence of Presidents” for its welcoming atmosphere that has attracted many world leaders, and dozens of US presidents, over the last two centuries.

In 1818, a two-story row house called the Tennison Hotel opened on Pennsylvania Avenue. Accommodations were incredibly sparse then within the city and the hotel changed hands, and names, several times until Henry Willard leased the buildings making up the hotel in 1847. But as Washington, DC, grew, so did the Willard. Today, the 12-story Beaux-Arts structure welcomes residents as diverse as the city it calls home.

“Unfortunately, I think the political scene sometimes gets in the way when people are considering planning a trip to Washington, DC,” said Janet Scanlon, Senior Marketing Manager at InterContinental Hotels. “They think DC is literally just government, but the city, as a whole, is incredibly rich in history and has so many things for people to do. A lot of the best things are free — which you don’t get in big destinations like New York, Los Angeles, or Chicago.”

When visitors step out from the Willard’s impeccably kept lobb, and onto the corner of Pennsylvania Avenue and 14th Street NW, they’re two blocks east of the Treasury Building and the White House. Two blocks to the south is the entryway into the National Mall. One walkable mile away is the Capitol Building.

“The Willard has always been located on this corner since 1818,” Scanlon said. “Even back then, the founders knew the proximity to the White House and the Capitol Building would be a big seller for the hotel.”

If you have unused travel rewards currently sitting in your credit card account, a stay at the Willard InterContinental may be easier (and cheaper) than you think. Most credit card companies have redemption options that will reimburse cardholders for travel expenses such as airfare, car rentals, hotels, tours, and attractions. Points are typically redeemable at a 1¢-per-point conversion rate on eligible purchases, though occasional promotions could make the points even more valuable.

Depending on the number of rewards points or miles currently in your account, you could be only a few steps away from becoming a part of the Willard’s history.

A Building that Serves as an Important Part of History

History buffs could plan an entire vacation around the Willard alone. In terms of history, the building can stand alongside any other within the District and hold its own.

From February 4 to February 27, 1861, the Peace Congress, featuring delegates from 21 of the 34 states, met at the Willard in a last-ditch attempt to avert the Civil War. An exterior plaque from the Virginia Civil War Commission, located on the Pennsylvania Avenue side of the hotel, commemorates this effort.

During that time, detective Allan Pinkerton smuggled Abraham Lincoln into the Willard amid several assassination attempts. Lincoln lived in the hotel until his inauguration on March 4, holding meetings in the lobby and carrying on business from his room. 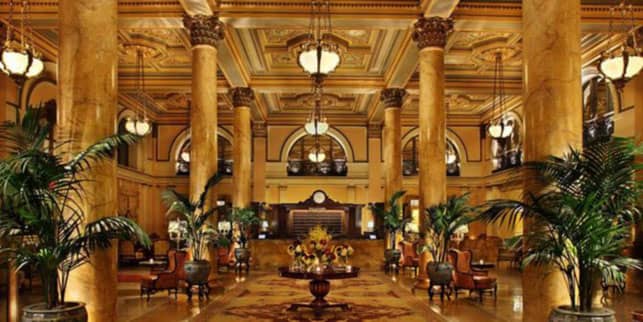 The Willard InterContinental’s immaculately kept lobby welcomes visitors from all over the world.

Later that year, Julia Ward Howe would pen the lyrics to “The Battle Hymn of the Republic” after hearing “John Brown’s Body” sung by street crowds following a review of Union troops.

“This is a hotel that has played a role not only in American history but in world history,” Scanlon said. “Last June (2017), we hosted Prime Minister Modi of India, and he held a meeting with 20 of the top American CEOs. We continue to play a large part in being the center of Washington.”

The Willard’s guest rooms are among the largest offered to Washington, DC, travelers and feature premier views of Pennsylvania Avenue and the Washington Monument. The building also hosts a historical gallery that chronicles the hotel’s story as part of the Willard’s history tour every Saturday at 2 p.m.

“Most people choose to stay at the Willard not only because of the building’s history, but because we’re located so close to everything,” Scanlon said. “If you pinpoint the monuments, memorials, and museums that Washington is known for, we’re right there by them.”

Enjoy Custom Cocktails and Dining at the Round Robin Bar

The Willard’s history isn’t relegated solely to its impressive lobby and large guestrooms. The Round Robin Bar offers travelers and locals a shot of history to go with craft cocktails handmade by a resident bartender who started mixing drinks there more than 30 years ago.

The dark mahogany of the Round Robin has soaked in more than 150 years of history. The establishment, opened in 1847, is the longest-operating bar, in its original location, in Washington. The Round Robin’s walls feature photos of famous former visitors at the Willard, all of whom play an important role in the bar’s Off-the-Wall Cocktail Menu.

The Round Robin Bar was the favorite drinking establishment of many famous patrons.

The Willard’s bartenders have curated a menu of cocktails featuring the alcohol that was popular during the age of each drink’s namesake. Photos on the wall include former visitors Buffalo Bill Cody, Abraham Lincoln, Walt Whitman, Mark Twain, Charles Dickens, and many others.

It was at the Round Robin that Kentucky senator Henry Clay introduced what would become the bar’s signature cocktail, the Mint Julep, to Washington.

In 1904, as the hatchet-toting prohibitionist Carrie Nation raged against alcohol consumption, a sign in the Round Robin Bar went up that read “All Nations Welcome Except Carrie.”

Every month, the Willard plays host to the wildly popular History Happy Hour. The event started off as a test in 2017. Less than a year later, the happy hour has a waiting list that includes visitors and locals alike.

“We take a topic — it doesn’t necessarily have to do with the Willard specifically — and offer a two-hour class where people get to make a few drinks as part of a mixology class and hear some really cool stories from local historians,” Scanlon said.

Recent topics include the history of the famous Washington cherry blossoms and featured speakers who touched on far more than the trees that line Washington’s streets.

“One attendee said she was worried the talk would be all about flowers, but she said she learned a lot about how the tidal basin evolved,” Scanlon said. “She didn’t know it had a segregated beach at one point. We touched on a lot of things many people wouldn’t necessarily know about.”

The Willard Provides Views that are “Very Washington”

During the warmer months, the Willard’s French Café du Parc opens its doors to allow diners to sit on an outdoor terrace and take in the views from Pennsylvania Avenue and beyond. 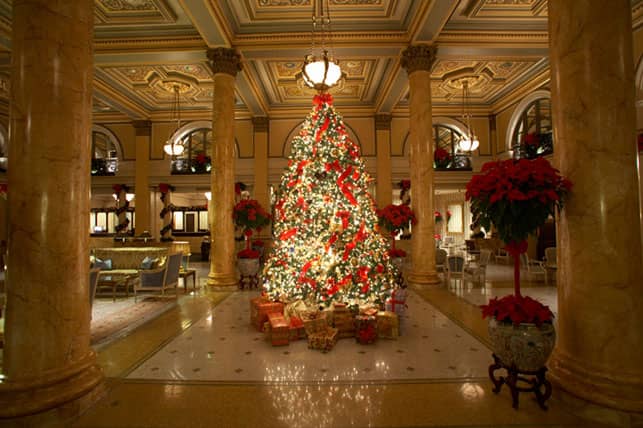 The Willard is a popular destination during the holiday season.

Scanlon noted that the end of March until the beginning of June is the Willard’s busiest time of year. Traffic tends to slow down during the summer months and picks back up when Congress is in session and again around Christmas time.

“People come to the Willard during the holidays whether they’re staying here or at a different hotel,” she said. “A lot of people want that ‘Christmas in New York’ feel without the traffic, hassle, and high price. We offer that. Our lobby every December is like Christmas on steroids.”