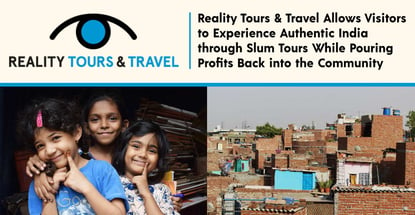 In a Nutshell: India has so much to see — natural and cultural wonders, of course — but above all, the rhythms of the countryside and the cacophony of megacities like Mumbai and its legendary slum Dharavi. These are places tourists have rarely seen. Over the past 15 years, however, Mumbai-based Reality Tours & Travel has been changing that, drawing vacationers, adventurers, and even corporate and educational groups to experience places like Dharavi and to learn the stories of the amazing Indian people. What’s more, through its own Reality Gives nonprofit organization, Reality Tours directs 80% of the profits it earns from its tours back into community building.

In terms of land area, Dharavi is a small place, but it’s large in every other way.

Dharavi, a slum located within the megacity of Mumbai, India, was founded in the late 19th century during the British colonial period. At the time, the government had implemented what we today would call a rezoning process, moving polluting tanneries to what were then the outskirts of the city.

Today, Dharavi occupies a space in Mumbai similar to that of Central Park in Manhattan, but that’s where the similarities end. Over the decades, lower-caste and rural Indians increasingly moved into infrastructure-poor Dharavi to participate in its informal, unregulated economy.

The number of people now living within its less than 1 square mile is estimated at around 700,000.

Because Dharavi evolved into a locus for members of India’s lower castes, it may have the most ethnically and religiously diverse population in the country. Crowded and shunned, Dharavi’s multicultural residents learned to live communally and developed their own distinct sense of identity.

Sounds like the perfect family vacation destination, right? Well, actually, thanks to Mumbai-based Reality Tours & Travel, more families, adventurers, and corporate and educational groups from outside India are venturing to Dharavi (and to many other overlooked places in India) for a chance to see things as they really are — and to give back.

“We believe in showing people the real India,” Pujari told us. “So that’s what we do.”

Tours from the Slums of Mumbai to the Spires of Nepal

The story of Reality Tours is one of overcoming challenges. 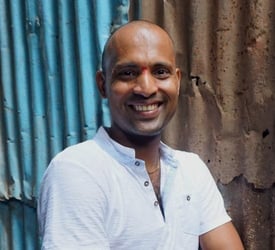 Krishna Pujari is the Co-Founder of Reality Tours & Travel.

Initially, Pujari was skeptical. He met Way when he went to dinner in the restaurant where Pujari worked. They developed a friendship and began to explore Dharavi together.

“When Chris first talked with me about this, I was a bit like, a slum tour — really?” Pujari said. “And, as we walked in Dharavi, people were shouting at us, ‘Hey, [what is] this white guy doing here? Take him to Gateway of India.'”

That self-protectiveness was understandable, Pujari reasoned. Neither he nor Way wanted to create a situation where tourists would come to Dharavi, gawk at the squalor, and return home full of pity.

Pujari said he knew better — he understood the fierce pride of the people of Dharavi and that, although outward conditions were dire, they all cared for one another. He set about convincing them that Way’s idea had merit. 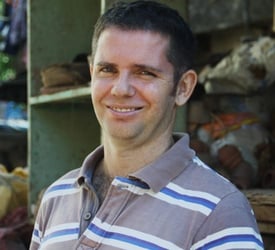 Chris Way is the Co-Founder of Reality Tours & Travel.

“I was like, ‘Tell me, are you hungry? No. Are you dangerous? No. Are you sitting around doing nothing? No — see my factory, see how many people are working,'” he said. “And that was exactly what I was trying to show them.”

Then came the challenge of actually building a business. It took months to attract the first customer. In 2006, only 367 travelers used the service. But after Lonely Planet mentioned Reality Tours in a guidebook in 2007, things began to change.

Reality Tours started offering visits to markets and other attractions in South Mumbai in 2006, and tours in rural areas outside the city began in 2008.

Now, tours centered in Mumbai, Delhi, and Agra (home of the Taj Mahal), and even multiday excursions to locations like Nepal serve more than 15,000 guests every year.

Tours to these locations offer visitors a life-changing experience. But visitors also gain the satisfaction of knowing that at least 80% of the money they spend with Reality Tours goes back to local communities. That’s explicitly by design.

In 2008, just as the business was beginning to scale, Way and Pujari created the Reality Gives NGO to implement their mission of bringing equal access to opportunity and resources to underserved Indian communities and a high-quality educational experience to every underprivileged Indian youth.

“We’ve worked with more than 10,000 community members so far,” Pujari said. A school with more than 450 students that employs about 35 teachers in Dharavi helps Indian youth up to age 30 learn English and develop computer and soft skills. In addition, Reality Gives provides funds for community development centers, sports programs for boys and girls, and even mobile English-language learning.

“We also have a youth employment program,” Pujari said. “When we see potential teachers among the students who finished their courses, we train them for a year to be our teachers, and then they come and teach in our school.”

Employees at Reality Tours stand as real-life examples of realized potential. General Manager Asim Shaikh, for example, started with the company in 2009 as a part-time computer teacher and has gradually moved up the ladder — “a very, very long journey,” he said. “We have always got a stepping stone in this company.”

Reservation Consultant Jitu Jain came to Dharavi at 15 to work in the recycling business.

“While I was working, I used to see these tours happening. And, because I had an English-speaking skill, I thought of becoming a tour guide. This changed a lot for me. I get more exposure to the world — all made possible because a social enterprise like Reality Tours started in Dharavi and empowered young people like me,” said Jain.

Dharavi continues to face struggles — including providing its residents with basic infrastructures such as plumbing and electricity. But as India began to open itself up economically to the West in the ’90s and globalization and technology began to make the world smaller, new generations of Indians have broadened their perspective of the world.

“I see the changes in many ways,” Pujari said. “Now, people are prouder of Dharavi. Before, when people from Dharavi went outside, they would never, ever, tell that they were from Dharavi — especially when they went for job or school interviews. Even products made in Dharavi never mentioned it — they just used the main city name.”

That’s changing — Dharavimarket.com (no connection to Reality Tours) is a platform where Dharavi squatters proudly offer their home-produced goods to the world.

[I] Had an excellent tour with Sabina dispelling any preconceived ideas of life here. It was a truly inspirational and uplifting experience. The living conditions may appear grim but I suspect most of the inhabitants live a more fulfilling and happy life than many with far more material belongings. We could learn a lot from these people. — Liz H., Reality Tours & Travel Customer

Furthermore, children born in Dharavi when Reality Tours was just getting started are now 15 or 16, and they have a different mindset than their parents. Exposure to the West and to Western travelers brought in by Reality Tours is changing their expectations of what they should be able to accomplish.

“As a tourism business, we try to change that negative image people have toward Dharavi,” Pujari said.

Pujari has also said, “Our vision is a world where all tourism promotes cross-cultural understanding and local development.”

“And every single tourist who comes to Dharavi and changes their mindset towards the slum, they are our achievements too.”