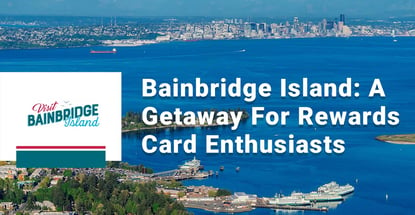 In a Nutshell: Visitors to the Seattle, Washington, area who want a different view of the city can take a short ferry ride to Bainbridge Island, a quaint and walkable village. Travelers connect with nature and engage with history and culture while also enjoying the island’s vibrant wineries, dining options, and coffee shops. The island also has plenty of shopping, galleries, and attractions, making it a perfect destination for card rewards enthusiasts looking to unplug for a day — or longer.

Seattle, Washington, is a major U.S. city that has a distinct culture and natural environment. Around Puget Sound, coastal and beach communities coexist with mountains and temperate forests, with several large islands in the sound offering additional points of interest.

Bainbridge Island is located directly west of downtown Seattle, and it is the most prominent of those islands. For generations, Seattle locals have taken short ferry rides from downtown to enjoy relaxing days of shopping and dining on Bainbridge Island, with many leaving their cars at home or at the ferry terminal and choosing to walk around the island’s commercial district.

As it does for locals, Bainbridge Island offers card rewards travelers a village-like respite from the urban hustle and bustle just across the sound.

“The great thing about Bainbridge Island is that you can take the ferry over and not need a car to get around,” said Christine Mueller, Executive Director of Visit Bainbridge Island. “Our quaint downtown has some unique shops and lots of restaurants and coffee places — it’s walkable and very scenic.”

Those who might be visiting family in the Seattle area during the holidays, for example, would be well advised to save some gift shopping to do in Bainbridge Island’s manageable and relaxing downtown.

Many visitors head over for an afternoon, and they can walk onto the ferry, do some shopping, have lunch, and then return to Seattle. However, Bainbridge Island isn’t just nice for day trips — the experience is rich and varied enough to justify an extended stay.

“You have enough to do for three days, or a weekend away, where you’re not driving for hours and hours to get somewhere,” Mueller said.

A Year-Round Destination in the Pacific Northwest

The Seattle area may be famous for its rainy weather, but it also has a mild year-round climate, which makes Bainbridge Island enjoyable any time of year.

Accommodations run the gamut, including affordable hotels and all-suite properties that are great for families with travel card rewards to spend, and lodging made for romantic getaways.

On the south end of the island, The Inn at Pleasant Beach has all the traditional amenities of an upscale resort. In the heart of downtown is the Eagle Harbor Inn, a small, boutique-type hotel, and suite-style lodging at the Marshall Suites or the Quality Inn.

“And then we have numerous other vacation rentals, including some beautiful properties with views of the water,” Mueller said.

Many of Bainbridge Island’s culinary attractions center on fare that is quintessential to the Pacific Northwest. There are seven wineries on the island, for example, and tastings are available at all of them. There’s also a selection of popular breweries and distilleries.

Bainbridge Island visitors can select lodging that ranges from rustic to luxurious.

Given that Seattle and coffee go hand in hand, coffee is also popular on Bainbridge Island.

“Storyville Coffee and Pegasus Coffee are our two most popular coffee locations on the island,” Mueller said. “They both roast their own beans, and it’s a very Bainbridge experience.”

As for restaurants, Brendan McGill of Hitchcock Restaurant Group operates several in the downtown area. His Hitchcock Deli and Bruciato Pizza are institutions on the island. And there’s no shortage of other good food.

There’s something for everyone, from the Vietnamese-inspired Ba Sa Restaurant to the Blackbird Bakery, a must-stop for granola and coffee and pastries, and Mora Iced Creamery.

“I definitely encourage people to save room for dessert at Mora,” Mueller said. “Their ice cream is handcrafted from top-notch ingredients, and there’s always a line out the door.”

Offering Vistas and Views of History and Culture

Bainbridge Island isn’t accessible only by ferry. From the west, there’s a bridge to the northernmost part of the island, a few miles away from downtown.

“If someone wanted to road trip up the Washington coast, they could come up through Olympic National Forest and then down south until they hit Bainbridge Island,” Mueller said.

There, near Agate Point, the Bloedel Reserve begins Bainbridge Island’s concentration of natural attractions. Also in the north is Fay Bainbridge Park, where the lights of Seattle shine in the eastern sky at night.

Outdoor activities are another huge draw. Bike rentals are popular, and the island includes many biking and hiking trails.

“You can also camp at Fay Bainbridge, and lots and lots of people go there for beachcombing,” Mueller said. 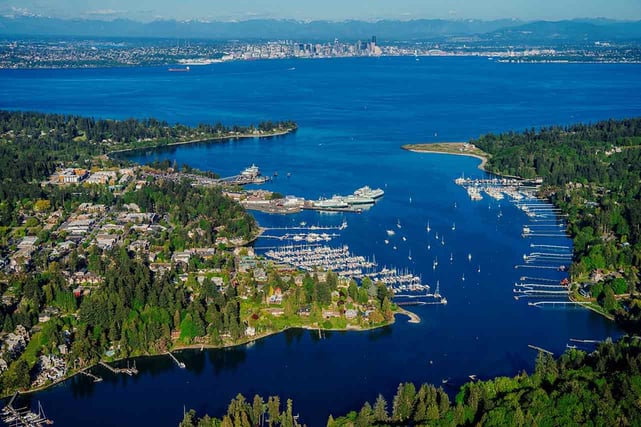 Bainbridge Island is rich in history and offers plenty of outdoor activities.

Nature and culture are always intertwined, and on Bainbridge Island, culture has a historical component. The Suquamish Tribe continues to consider Bainbridge Island home as it has for centuries.

“The Suquamish have an incredible museum just north of Bainbridge Island, on the Port Madison Indian Reservation, and Chief Seattle was part of that tribe. So I would encourage people to learn about their significance in the history of the area,” Mueller said.

“That’s important to our community,” Mueller said. “The Japanese Americans who lived on Bainbridge Island during the war were among the first to be sent off to the camps. Now we have a very powerful memorial and national historical site where you can understand what happened, how the community supported them while they were gone, and how they embraced them when they came back.”

Bainbridge Island features art galleries, museums, and other cultural attractions to ensure that there are alternatives to shopping, dining, and outdoor activities. Card rewards travelers have plenty of opportunities to take a little bit of the island home with them.

Bainbridge Island offers plenty of fun for families, couples, and anyone interested in the unique flavor of the Pacific Northwest.

And card rewards travelers who arrive at the right time of the year can enjoy access to local events that will transform their visit into something only Bainbridge Island can offer.

Every February, the Chilly Hilly Bike Race is a huge draw for off-islanders and locals, and we also do a big Fourth of July festival,” Mueller said. “On the first Friday of every month, downtown businesses and galleries stay open late to support our ‘First Friday Art Walk,’ and don’t forget to visit the wonderful Bainbridge Island Museum of Art.”

Visitors will almost inevitably experience Bainbridge Island as a community, and while they may not stay for long, it might almost feel like home during the time they’re there.

“People have been coming to Bainbridge for many, many years,” Mueller said. “You’re close to the city, but you feel a world away.”