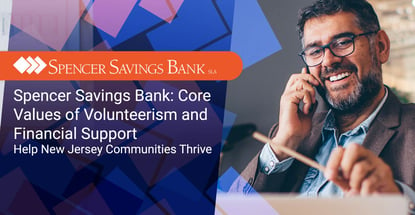 In a Nutshell: Elmwood Park in northeastern New Jersey is a small town situated within the urban cacophony of New York City and Newark. But thanks to the team at Spencer Savings Bank, big things happen there every day. Living up to the highest aspirations of community banks, Spencer Savings Bank doesn’t just wait for charitable opportunities to come to it — it goes out and finds them — pragmatically offering employee time and resources to help communities throughout its service area thrive. The result is a tradition of giving that also accommodates decisive action in times of emergency, a combination that has earned Spencer Savings Bank our Editor’s Choice™ Award for Community Commitment.

In the small town of Elmwood Park and across northern New Jersey, people will remember the night of January 30, 2019, for a long time. That’s the night Elmwood Park’s Marcal Paper Plant burned to the ground.

Marcal had been a leading employer in Elmwood Park and a source of continuity in a region where change often seems the only constant. On the frigid night of January 30, a fire destroyed the 86-year-old plant, closing roads and schools and throwing almost 500 employees out of work. Thanks to the dedication of hundreds of first responders tending to the blaze, none of the 200 workers on the property at the time were injured.

“Because we’re a community bank, we give first to our community — that’s a priority,” said Anita Guerrero, VP of Corporate Communications for Spencer Savings Bank.

Spencer quickly donated $25,000 to help Marcal employees impacted by the tragedy. The bank also attended a Marcal job fair and provided financial information to the attendees. Financial assistance was also offered to all Marcal workers who were bank customers.

But the bank wasn’t done yet. “We found out that the Elmwood Park PTO was coordinating a brunch to honor the first responders,” Guerrero said. Once again acting quickly, the bank gave $5,000 to the PTO to make the brunch happen — resulting in a total Marcal donation of $30,000. 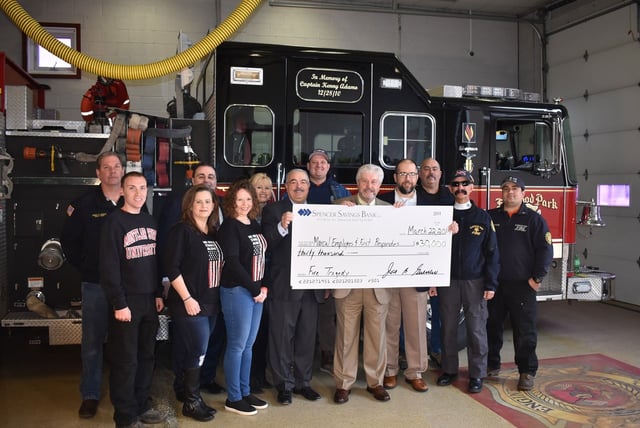 “As a community bank, we were very happy to help the Marcal employees and are proud to honor all the first responders who did an amazing job,” Spencer Chairman, President, and CEO Jose B. Guerrero said in a press release. “We too, are #EPStrong, and proud to help support the people that live and work within this community.”

Spencer’s financial assistance to Marcal employees and first responders exemplifies the bank’s readiness to support the needs of the communities it serves. But Spencer also steps up with support its communities can count on over a much longer time frame. One example is Spencer’s eight-year track record of volunteer time and contributed resources to the Special Olympics of New Jersey.

The culmination of Spencer’s annual effort on behalf of the Special Olympics is a three-day flag football tournament known as the New York Football Giants Snow Bowl. Held in March on the Giants’ home turf at MetLife Stadium in East Rutherford, N.J., the Snow Bowl pits a team of employees, the “Spencer Blue Diamonds,” against other area teams in celebration of an organization that fosters competition and training for more than 25,000 New Jerseyans with disabilities every year. 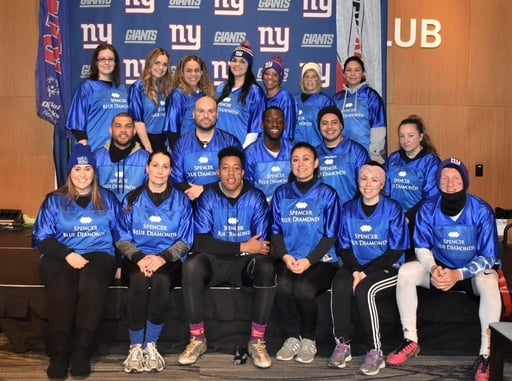 The Spencer Blue Diamonds participate in a three-day flag football tournament each year to raise funds for the Special Olympics.

The Blue Diamonds won two of the three games they played in 2019, scoring a total of 10 touchdowns.

But the real work happens before the Snow Bowl. Spencer hosts a variety of fundraisers at the bank — raising funds from employees, family, friends, and customers in the months leading up to the Snow Bowl.

“For years now, we’ve been one of the strongest supporters of this organization,” Anita Guerrero said. Spencer was the second-highest fundraiser at the 2019 Snow Bowl and has raised almost $120,000 for the Special Olympics over the course of its involvement with the organization.

“It is so moving to speak to the athletes and their families and hear how much joy this organization brings to them. It holds a special place in their hearts and they hold a special place in ours. We’re so proud to have partnered with the Special Olympics over all these years to support them in their mission of improving the lives of people with intellectual disabilities,” Guerrero said.

April is National Financial Literacy Month, and as part of that effort, Spencer participates in Teach Children to Save Day. This year, team members worked with almost 300 students at various local schools, presenting lessons on financial literacy and distributing educational newsletters and giveaways.

“At Spencer, we believe strongly in teaching children about important topics such as finance and money management,” Guerrero said. “For us, it’s never only about just cutting a check. Our staff is out there in the community connecting with people on a daily basis. We go and actually teach the lesson plans to the children — the importance of saving, the importance of distinguishing needs versus wants, creating a budget and much more.” 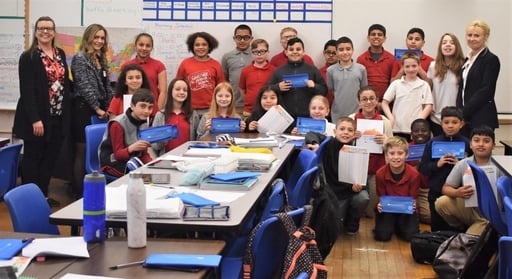 Spencer team members worked with almost 300 students at various local schools to present lessons on financial literacy for Teach Children to Save Day.

Spencer promotes financial literacy in New Jersey school districts on a broader level by sponsoring the EverFi digital learning initiative, contributing thousands to bring the program to schools at no cost to taxpayers.

“We’re proud to offer this digital learning program at various local schools in our community. Financial education is the key to empowering the community. These computer modules are fun and help bring complex financial concepts to life. We love partnering with the schools and helping them educate our children,” Guerrero said.

The modules expose students to a variety of financial topics — from incidentals like how to rent a car to fundamentals like how to save for college. “And then at the end, we come in and talk to the kids, play some games to test their knowledge and award certificates,” Guerrero said. “The feedback has been really great — they find it really beneficial.”

And at the end of every school year, Spencer awards scholarships to dozens of gifted middle school and high school students within its service area, rewarding academic success, community service, and involvement in school activities.

This year, the high school students each received $1,000 for their post-high school education, while the middle school students received a tax-advantaged Coverdell Education Savings Account in the amount of $500. All told, the Spencer Scholarship Program has awarded nearly $400,000 since it began in 2002.

A Mission of Community Building in New Jersey and Beyond

These initiatives barely scratch the surface of what’s happening at Spencer, however. As Guerrero notes, “Every week we have something going on.” In its communities and even far beyond, the bank is seemingly always ready to respond quickly to an emergency or fill an important gap in structural services. 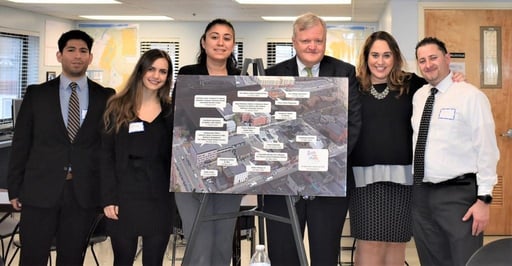 “It’s a very well-oiled machine and we do a lot of work there, including having staff as part of their event planning committees,” Guerrero said. “We sponsor an annual lunch during the holidays, serving hundreds a hot meal. We also participate in their mock job fair, part of their Workforce Development program, where we help train participants on interviewing, résumé writing, and more. Our employees also help plan their “Behind the Seams” fashion show — one of the largest fundraising events for the organization. Our staff has even been models in the show!”

Meanwhile, when sudden tragedies strike, like the Marcal fire, even in places far from home, the bank contributes. An example came in late 2017 when Spencer donated $100,000 to the American Red Cross to assist in relief efforts in the wake of Hurricane Harvey, which inundated Texas with flooding rain, and Hurricane Maria, which devastated Puerto Rico.

“The Spencer team works tirelessly to help build up the community. It’s really amazing to see everything we are involved in,” Guerrero said. “Nights, weekends, no time is off limits. The team is constantly out there, not only making financial dreams come true but uplifting the community in a variety of ways. It’s really the Spencer philosophy – our mission, what we’re known for around here. It’s what we do best.”

Empower: A Digital Bank that Offers Savings Perks and an Assistant