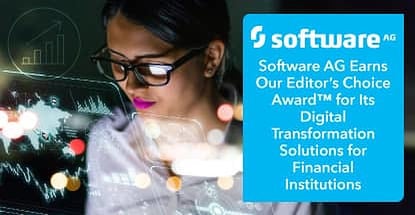 In a Nutshell: Financial institutions may not even know the extent to which they’re hampered by redundant applications and complex enterprise architecture — but Software AG does. The company has helped some of the largest financial service providers in the world save millions and overcome obstacles around modernization, while strategically positioning them for future growth. Software AG helps its clients align IT and operational needs, optimize automated processes and business logic, and leverage data for real-time decision-making and action. For these efforts, Software AG has earned our Editor’s Choice Award™ for its digital transformation solutions for financial institutions. //

I dedicate a few minutes every six months to cleaning out my cellphone. The process usually entails deleting old, unused apps, swiping away screenshots and other pictures that aren’t worth keeping, and pruning contacts I thought I’d call again but never needed to.

During the cleaning, I usually delete several apps that have lost their spot on my home screen to a new app that performs the same task, but better. Most of the time, I forget I even had the older app on my device. If this redundant collection of apps can be so prevalent on one phone, imagine how many useless apps are sitting on the phones of everyone in your office — or throughout your entire city.

Large organizations, like banks, have a similar issue and often pay for thousands of solutions, applications, and software products that are stored in their backend and customer-facing systems. The number of applications seems to grow every quarter and the lack of transparency between departments and branch locations makes it hard — and incredibly costly — to see which systems might be duplicating the efforts of other installed components.

Deleting redundant applications — and cutting their associated costs — can save banks millions of dollars over the long run. But the manual search for these processes can cost more than the savings they provide.

We’ve researched many companies over the years that work with banks and other financial service providers to aid in their digital transformations and clean up the complexities associated with legacy systems. And we’ve named Software AG as the recipient of our Editor’s Choice Award™ for its digital transformation solutions for financial institutions.

Software AG, an enterprise software company founded in 1969, has more than 10,000 enterprise customers in over 70 countries. The company’s list of financial services clients consists of some of the largest global institutions, each of which turns to the company for API Management, process and applications, and business and IT transformation.

“Financial service customer expectations have changed dramatically and continue to change at an accelerated clip due to external drivers from other companies that aren’t even in financial services,” said Laura Crozier, Global Industry Director, Financial Services at Software AG. “Big tech — like Google, Amazon, Apple, and Facebook — they all have different user experiences. These experiences have created the new benchmark for what customers expect.”

So, while customers anticipate a frictionless experience like the one they receive on their favorite social media or retail app, banks often lag behind in the innovation curve because of oppressive compliance standards and an overall lack of understanding of technology.

Software AG works to help clients overcome the barriers to modernization and strategically position them for the future to ensure growth. The company’s open, independent software leverages existing systems and readies them for future tech.

Clients position themselves to use their software as a competitive advantage to help align IT and the needs of the business, optimize automated processes and business logic, leverage data for real-time decision-making and action, and transform into a cost-effective, agile digital bank.

“If you work in financial services, you work with technology,” Crozier said. “In banking, there aren’t many physical assets unless you’re talking about gold bricks. When we consider the technological challenges, we have to first consider where banks are today because that shows us where they’re going.”

Data is the New Oil and Banks are Overflowing with it

Over the last decade, data has emerged as one of the most valuable resources to businesses in any vertical. Data today is collected, analyzed, bought and sold creating new businesses, new regulations, and new economics, according to an Economist article. The new economy is more about analyzing rapid real-time flows of often unstructured data to drive important business decisions. And many banks don’t realize the power their massive data centers hold.

“If you think of data as the new oil, banks are full of nothing but data,” Crozier said. “Data is inside the company — it’s across silos and applications and even outside with partners of the banks like payment processors or retailers. So how does all this data come in, how is it managed securely, and how can it be analyzed and understood so it can be acted on?”

Software AG helps its financial services clients access their data, aggregate it, and stream it in real time so banks can act on it. That influx of new information makes it easier for banks to properly allocate their budgets to focus on new technology, instead of struggling to keep ahead with the changing times.

“The rule of thumb is that around 80% of the IT budget goes to just keeping the lights on and the processing,” Crozier said. “Only about 20% goes toward innovation. In the past decade, the biggest chunk of that went to compliance.”

Compliance issues started to overwhelm many financial institutions a decade ago, around the start of the financial crisis. New rules and regulations put in place to try and head off future issues only worked to slow the growth of innovation in the financial sector.

“Those people who were lucky enough to not lose their jobs during the crisis faced a tsunami of regulatory compliance that had really rapid deadlines by which they had to comply,” Crozier said. “The banks were on their heels, forced to comply, and most often they just checked the box in a tactical fashion. Fortunately, it’s a much different world now.”

Crozier pointed to an improved economy with increasing interest rates that help banks become more profitable on the spread.

“They’re able to think strategically because they aren’t hammered with all of the compliance demands,” she said. 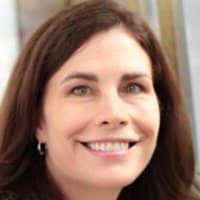 Laura Crozier is the Global Industry Director for Financial Services at Software AG.

That strategy helps corporate bottom lines and customer experiences by freeing up companies to develop new technologies that push the envelope toward the future of finance.

“Because banks are able to breathe and think more strategically, they are now looking at the foundations of the bank,” Crozier said. “They’re looking at the enterprise architecture, which is extraordinarily complex, lacking in transparency, and siloed with legacy applications that are extremely costly.”

While the same enterprise architecture existed before the financial crisis, banks became so bogged down with compliance demands that they weren’t able to adapt it as quickly as did their digital-first competitors.

“This is significant because banks are trying to compete with these digital-first competitors, but are burdened by this complexity and lack of transparency that inhibits their agility,” Crozier said. “That inhibits their ability to develop new technologies that meet customer expectations.”

Without the transparency and agility, innovation slows and services aren’t rolled out fast enough to meet customer demand.

Just like the multiple apps on my cellphone were clogging up the operating system to complete the same task, banks regularly battle redundant applications that eat up budgets and bandwidth. Software AG works with clients to isolate and eliminate this costly confusion.

“There are some vendors who will sell to one part of a bank, and then again to another part of the bank because there’s no governance over it,” Crozier said. “It’s unethical, but it’s a problem because they don’t have that transparency.”

Crozier said banks can also have two applications from different vendors doing the same thing that they could reduce by one, but the banks can’t see it because the process of spotting these applications manually is nearly impossible.

To prove that point, she pointed to a Software AG client that she identified as “one of the top 5 banks in the US,” that had tried to undertake an application rationalization process. Over the course of the year, with a manual oversight and governance and not having it documented in an electronic depository designed for the purpose, their applications went up from 4,000 to 4,300.

“Their CTO was ripping his hair out when he saw that,” she said.

Another client, Credit Suisse, was able to save millions of dollars a year thanks to Software AG’s solutions.

“They had a payback in just six months by investing the time up front in order to go through and document what the enterprise architecture is,” Crozier said. “That created the transparency to see that they had multiple applications that were doing the same task.”

Banks face a myriad of issues every day, but Crozier pointed to enterprise architecture complexity, a lack of transparency, and the cost of software as three of the biggest areas where Software AG helps clients operate in a more agile and efficient way.

“For years, banks have been guilty of throwing bodies at problems — things like gaps in processes and technological gaps,” she said. “They’re now taking a more strategic approach. We work to help them understand what their operating model is, what are the processes that comprise that operating model, and how to automate, optimize, and make the operating model agile so that it can respond quickly to market conditions.”

So, while Software AG may not be able to rid your phone of the battery- and data-draining apps you no longer need, the company is our Editor’s Choice for its ability to better organize your financial institution and help deploy digital initiatives faster and more successfully.