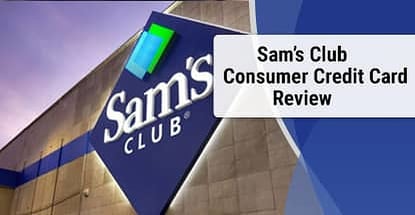 Wholesale clubs like Sam's are a great way to save on items you use regularly. Buying in bulk can save consumers large amounts of money over time, plus it cuts down on the number of trips you make to the store. With Sam's Club's Consumer Credit Card, you're able to make purchases at any Sam's Club or Walmart location — but that's about it. The lack of rewards, perks, and a high 22.9% interest rate make this card unattractive to bargain seekers who turn to Sam's for deals.

Along with unfavorable terms are reports of poor customer service through card issuer Synchrony, and multiple problems when applying and using the card. For consumers looking to maximize their deal-making powers, there are other choices in the credit card space for your wholesale club shopping.

Before you can even apply for a Sam's Club Consumer Credit Card, you need to pay $45 for the basic one-year Sam’s Club membership. While the bulk-buy savings you get inside the store can offset the cost of membership — especially with the use of Sam's Club coupons — there really isn't much of an incentive for using the Consumer Credit Card once you're in.

While the 22.9% APR is on par with many store cards, the lack of rewards or discounts makes the card the last resort for financing big purchases.There's no annual fee, so owning the card won't cost you anything. But for the true deal seeker, a cash back rewards card is better suited for maximizing the bang for your buck with each trip to the store.

With the absence of any introductory rates or perks, this basic card is really only good for making everyday purchases at Sam's Club (or Walmart) — and it's not very good at that. The only way to avoid interest is by paying your balance in full each month, and if you can do that you'd likely qualify for a card that offers a better deal.

Many cardholders report issues with card issuer Synchrony taking long periods of time to process payments, as well as problems with the card being locked up due to suspicious activity regularly. As a card that requires good credit to be approved, there's little under the hood to draw attention to it.

Better Cards to Use at Sam's Club

With the complete lack of frills offered through the Sam's Club Consumer Credit Card, it isn't a hard task finding better options for consumers with average credit. Even the most basic cash back or reward points card can offer qualified applicants lower APR terms and some sort of perk for your purchase. Sam's Club is a haven for people looking to save money, so why diminish your deal by using the wrong card for your purchases?

Sam's Club touts that one of the biggest perks of the Consumer Credit Card is its ability to doubles as your membership card, meaning when you meet the greeter at the front door, you can flash your credit card to get in. That doesn't move the needle for us, as we'd much rather flash a regular membership card and use a cash back card to get up to 5% back on all purchases made.

No introductory perks, teaser rates, or rewards, means you're left with nothing but a 22.9% interest rate. If not paid off every month, that can make that pallet of pantry items something you'll be paying on for months. A low-rate card, like the one suggested below, decreases your interest charges — and increases the amount you can spend, since you won't be giving all of your hard-earned cash to interest charges.

You may not be able to take that 20-jar case of pickles on an airplane, but you won't need it with the proper travel rewards card. Take those purchases you make for the family and let them accrue into a trip that you'll all remember. It's a great way to create memories for purchases you'd be making anyway.

With a litany of limitations, and plenty of consumer complaints, there's not much punch in the Sam's Club Consumer Credit Card. When stacked up against the competition, it's cut and dry that there are better options out there for any consumer with credit solid enough to qualify for this card. If you're looking to save money on your purchase, and on the back end, look elsewhere.

What Others Say About the Sam's Club Credit Card

With no rewards, the Sam's Club Consumer Credit Card should rely on a spiffy interest rate and great customer service to bring customers in. Unfortunately, it seems to fail on both accounts according to the reviews we scoured. Many cardholders report issues with making payments, as well as using their card when it's needed. Most problems require a call to card issuer Synchrony, which reportedly extended the time needed to reach a resolution.

Opening an account was a nightmare, the employee entered the wrong address and it took over a month to get the card activated. Once activated, Synchrony Bank was unable to activate my mobile number, and they kept blocking the card without reason. Each time, I had to call them. Today I paid my card in full and they blocked the card after payment was made in Sam's Club. No one is able to activate it and kept saying, "We have to send you a letter in few days with a code." I canceled the card, got compensation from Sam's Club and left. Worst Bank service I have ever encountered. Literally, they are useless and unprofessional! Stay away from Synchrony bank, too many issues in two months. — CreditKarma.com

A review from FinanceGlobe.com says:
“

I applied for Sams Credit Card and received instant approval for $900 in March 2013. My credit scores are in the high 600's, with one late payment that was over 6 months old. Since having the card, I am making sure I pay on time every month and keep the balance low. Hopefully, I will get a credit limit increase soon. A good card to have to help build your credit up. — FinanceGlobe.com

A review from ConsumerAffairs.com says:
“

I used the Sam's credit card to pay for my membership. A week later, I went to the store and was required to pay for the membership again for it showed as expired. It's been almost a month and I'm still trying to get a refund. I'm starting to distrust this company. I get the feeling that this is not the only time they have charged me for something I did not get or failed to refund my account for things returned. — ConsumerAffairs.com

Is the Sam's Club Card Right for You?

As one of the top destinations for bargain seekers in America, Sam's Club, and parent company Walmart, have carved a niche with consumers who want to save a few bucks. That reputation does not seem to extend to its Sam's Club Consumer Credit Card offering. With a high 22.9% APR, and no perks, rewards, or frills to speak of, this card offers nothing that thrifty customers would crave.

With higher approval standards that reportedly require scores at least in the high 600s, consumers eligible for this card are better suited elsewhere, where the APR is much lower and the perks higher.