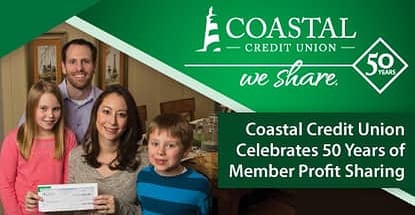 In a Nutshell: Coastal Credit Union was founded by eight IBM employees who shared a collective vision to bring the financial benefits of a credit union to family, friends, and North Carolina communities. What began as the IBM Raleigh Employees Federal Credit Union in 1967 has since grown to have more than $2 billion in combined assets. Set to celebrate its 50-year anniversary on August 31, Coastal has become an institution that not only caters to its members’ financial needs, but actively gives back to the community through a variety of philanthropic endeavors. //

Larger, multinational banks tend to have more resources and reach, making it easy to overlook the smaller financial institutions that place the best interests of members over those of shareholders. However, for those who have discovered these financial gems, local banks and credit unions can be great examples of organizations that celebrate their individual members and the communities in which they serve.

In fact, the act of forming a credit union can be viewed as an act of service, in and of itself. For starters, the philosophy behind credit unions is “members helping members.” In contrast, larger banks often seem to have primary objectives that are centered on increasing profits.

Those who join credit unions become members of cooperatives that function under democratic systems, so their voices actually matter. Additionally, members often gain access to lower interest rates on car loans and mortgages, while earning more interest on savings accounts than they would through traditional banks.

Since its genesis, North Carolina-based Coastal Credit Union has been a great example of this cooperative system in action while serving members in the Raleigh area for nearly 50 years.

With its 50-year anniversary set for August 31, the credit union has a lot to celebrate, particularly in the area of community outreach. Coastal has been ramping up philanthropic efforts in recent years, forming the Coastal Credit Union Foundation in 2011, as well as regularly hosting events, fundraisers, and campaigns — all in an effort to better serve its members and the community at large.

To top it off, the institution secured the naming rights to Coastal Credit Union Music Park at Walnut Creek in 2016. The 20,000-seat music park has an ongoing roster of big events, including concerts, fundraisers, promotions, and Coastal’s big anniversary celebration, set to take place at on August 26.

50 Days of Special Events Lead Up to the Golden Anniversary

During the 50 days leading up to Coastal Credit Union’s golden anniversary, the institution has planned a lot of fun for its members. All events, promotions, and activities incorporated the number 50, with marketing and branding efforts making clever use of it.

“50 Years of Sharing,” for example, is a series of videos and member narratives that highlight how Coastal has impacted the lives of its own employees, members, and the community. These stories are published on Coastal’s microsite, BankBetter.org.

“Some of the stories have been really touching,” said Joe Mecca, AVP of Communication for Coastal Credit Union. “Some of them are about how we’ve made a difference for somebody — maybe they got a loan that they might not have been able to get, or we helped them through a difficult process.”

Product promotions, event giveaways, and volunteer projects ramped up for the 50 days leading up to the big day, with a special member party at Coastal Credit Union Music Park on the Saturday prior to the official anniversary. Events and promotions were geared toward raising funds for various nonprofits, increasing brand awareness, and serving the community.

“We’ve been making a very deliberate effort over the last several years to increase our public profile, and part of that is through community engagement and getting involved in local nonprofits and local events,” Joe said.

Coastal Credit Union not only recognizes the importance of giving back, but it makes a conscious effort to build relationships with local nonprofits that align with its foundation’s core values. Organizations that resonate with Coastal are actively involved in serving financially vulnerable populations, increasing financial literacy, and alleviating food insecurity, and its volunteer efforts revolve around helping organizations like Habitat for Humanity.

“We have a really good relationship with Habitat,” Joe said. “We’ve always supported either its annual campaign or one of its holiday events. A couple of years ago, we donated to a project where we built a house. That particular house was completely funded by donations that we provided or helped to raise.”

Philanthropy is an important part of Coastal’s company culture. From a public relations standpoint, cultivating strong relationships with local nonprofits and charities helps an organization build respect within the community. Giving back makes a community a better place to live and creates a work environment where leaders are respected, which is a win-win for everyone involved.

Company foundations give businesses a visible way to engage in charitable activities. Since Coastal launched its foundation in 2011, the credit union has adopted a sustainable, transaction-based funding model. Through everyday purchases, members are constantly giving back to the foundation, helping fund events, and serving the community in bigger ways.

“We created a funding mechanism for the foundation that’s completely driven by card interchange,” Joe said. “Every time members use their debit or credit cards, we’re taking a penny from the interchange and putting it into the foundation. That’s gotten us from $275,000 to $300,000 per year.”

Thanks to this member-driven funding, Coastal has a means to boost its visibility, and to organize events or fundraising campaigns in a collective effort to raise even more money. At a recent Power of Sharing gala event, Coastal gave several nonprofits a platform to talk about their community programs, and pulled in an audience to help them raise funding for their causes. The entire event was organized using money earned through Coastal’s one-penny-at-a-time funding model.

“We thought, ‘What if we gathered up a group of nonprofits, gave out some larger grants, and did it all in one night? And then we put them on stage, gave them the spotlight, and let them talk about their projects,’” Joe said. “That idea gained some traction and has become an annual event. This past year, it was 14 organizations that received over $400,000.”

Bringing Members and the Community Together

Coastal’s community impacts are far reaching, and as the institution continues to grow, increased member involvement brings the community together now more than ever before. The credit union added four new branches in 2016 through a merger, one which brought in 9,000 new members. Coastal is also enhancing its web presence by creating an online user experience that’s less product-focused and sales-oriented than before, instead focusing on financial literacy and educational resources.

“The new site is designed to provide a new experience every time the user logs on,” Joe said. “If they want to learn about a new topic or participate in a new financial education module, or if they want to use a solution finder, we’ve got a tool where they can select from drop-down menus. It’s like a choose-your-own-adventure website.”

Credit unions, like Coastal, are known to be among the most stable institutions in America, and belonging to one goes beyond everyday banking. When you deposit money at a credit union, you’re actually investing in a member-owned cooperative. It’s one of the safest places you can put your money, and it’s a great way to give back to the community you call home.

Elizabeth is a creative media professional with over ten years of journalism, branding, and copywriting experience in fields ranging from finance, to commercial print, to travel and entertainment. She’s written features for popular media outlets under publishing groups like Northern & Shell and American Media. Elizabeth holds a degree in Philosophy from UCSD where she also studied Creative Writing. When she's not writing, she can be found traveling around Southeast Asia surfing, working with nonprofits, and collecting vintage textiles.