TripLingo: An International Travel App that Helps People Communicate, Stay Safe, and Save Money While Visiting Other Countries 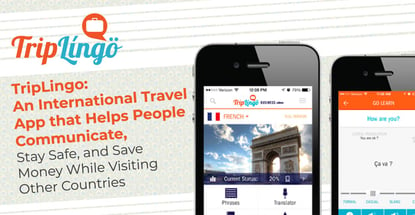 In a Nutshell: Thanks to smartphones and widespread internet access, traveling abroad has become less challenging than it was in years past. And with the TripLingo app, international travelers can make their experiences even more enjoyable. The app features a wide-ranging phrasebook with 40 languages, a voice translator, and image translator for restaurant menus. The platform also serves as a toolbox with wide-ranging educational tools such as audio lessons, interactive flashcards, and a quiz mode. And TripLingo’s wifi dialer saves clients money by allowing them to place international calls through the app and avoiding costly international roaming fees.

I hastily thumbed through my tiny English-to-French dictionary while the Parisian woman stared at me. Then, I nearly dropped the dog-eared book on the sidewalk and finally gave up.

Instead of trying to form a complete question in French, I just blurted out the name of the Metro station I was looking for — making sure to exaggerate the upward inflection at the end to make sure she knew I was asking a question (and sounding very silly in the process).

She responded (in English that was much better than my French) and politely directed me to my destination.

The summer I spent in France was in the pre-smartphone days when calling cards, translation dictionaries, and a mental map of the nearest internet cafe were required tools. Thankfully, the locals were friendly and generally more than happy to help a confused American.

In today’s world, smartphones and wifi make traveling abroad much more streamlined than in years past. And the TripLingo app makes it easier than ever for travelers to navigate through foreign countries and cultures.

“I lived in Vietnam for a year-and-a-half right after college and the language barrier was a real thing,” said TripLingo CEO Jesse Maddox.

Maddox was immersed in a culture he was unfamiliar with and could barely communicate with the people around him. English speakers in Vietnam are not as prevalent as they are in Europe. He said it’s slightly embarrassing to ask where the restroom is using only your hands.

He began searching app stores, book stores, and websites for a realistic solution to his problem, but he said the options available were ridiculously expensive or impractical for real-world applications.

“I ended up hiring two tutors, and I would eat lunch with them each day, and they would alternate,” Maddox said. “But most travelers understandably don’t have the time or desire to spend that kind of effort to become proficient in a language for one trip.”

Maddox began to formulate ideas for a realistic solution to the challenges he faced while abroad.

In January 2011, Maddox met Pratik Patel and James Martin, who shared his travel frustrations as well as his vision for what a travel app could be. The trio launched TripLingo just four months later.

The app is available to individuals in free and paid versions (the paid version includes a few more features like the wifi dialer).

But Maddox said TripLingo’s main client base is other companies that license the software for employees to use as they travel abroad for business.

Making a Good Impression with TripLingo’s Etiquette and Culture Guide

“Break the ice and build rapport using the phrasebook that includes formal, casual, slang and ‘crazy’ options for over 2,000 phrases per language,” according to the website. Maddox said the phrasebook goes beyond just the basics and includes information such as how to ask a server what he or she recommends in a restaurant.

Jesse Maddox is Co-Founder and CEO of TripLingo.

“That’s how you find out about the good stuff on the menu,” he said.

The crazy option is usually a colloquialism locals may not expect to hear from a tourist, according to Maddox.

He said he used the crazy option in France recently to let people know he spoke French like a “Spanish cow,” which would make locals laugh. It would also break the ice, and they would be more than willing to help him because they appreciated the effort he put forth to learn French.

All of this helps to not only communicate in a foreign country, but it contributes to travelers becoming more immersed in the culture surrounding them.

“Communicate with ease by instantly translating your voice into another language; have the response translated back into English,” according to the website.

And Maddox said that with the image translator, users can take a photo of a restaurant menu with a smartphone and it will translate it for them.

Maddox said TripLingo has a wide variety of tools available beyond just translation tasks, and customers use the app in varying ways to their benefit.

“Every traveler is different; every trip is different,” Maddox said. “Some people have been to the same country over and over, and some are less experienced. I kind of think of the app like Microsoft Excel. Everyone only uses 20% of the features but everybody uses a different 20%.”

TripLingo includes a wide array of tools to suit a variety of traveler needs, including translators, flashcards, and quizzes.

The idea is to accommodate a vast array of traveler types and needs, he said.

“Make a positive impression, avoid faux pas and interact with style by taking advantage of our culture guide to understand basic etiquette and be aware of cultural manners,” according to the website.

Among the other tools available to users are flashcards, audio lessons, and a quiz mode.

Maddox recalled a recent client who was traveling to Japan for a short business trip and relied on TripLingo’s educational tools to help her prepare for the trip.

“She learned how to read the basic materials in Japanese from the app, and, when she met her foreign counterpart, she read it to them in the appropriate way,” Maddox said. “And the guy broke into a big smile and basically said thanks for making the effort.”

He said the interaction set the tone for the business relationship over the next few days.

One user with peanut allergies was able to avoid catastrophe when he used the app to help him communicate with his waiter and learned that the innocuous-looking sandwich on his plate was cooked with peanut oil.

TripLingo’s safety features include informing users on how to dial the equivalent of 911 in various countries and other vital pieces of information to keep them safe during their journey.

Saving Money on International Calls Via the App’s WiFi Dialer

“Because we work with a lot of companies, some of our motivation is to figure out how we can help them save money,” Maddox said. “And international roaming expenses were kind of top of mind for a while.”

TripLingo’s solution to help companies save money on those costly roaming fees is its wifi dialer. The feature allows users to pull in their contacts and make international calls when connected to wifi.

“It’s kind of like a built-in Skype except you don’t need a special account, and the other person doesn’t need to have it,” Maddox said. “It’s basically routing the call over the internet.”

Rather than paying standard per-minute rates, which can add up quickly, TripLingo clients purchase credits in advance, Maddox said. “And we basically charge what we pay, for example, a call to the U.S. is like two cents per minute,” he said.

The wifi dialer is a popular feature with the companies TripLingo works with because they can see, for example, where they may have had 2,000 international call minutes in a month and saved $4,000 by using the app.

“For individuals, depending on where you’re going, the roaming rates can be pretty substantial,” Maddox said. “With TripLingo, you’re not committed to paying $10 a day on a two-week trip to make calls.”

TripLingo is currently focused on making the app as responsive, quick, and easy to use as possible, Maddox said. And the team is looking at how to include accommodating information for specific audiences, such members of the LGBTQ community when they travel abroad.

Savvy Travelers Use Rewards to Save Big While Visiting Historic Savannah

Turn Your Rewards Into a Family Adventure at Angel Fire Resort