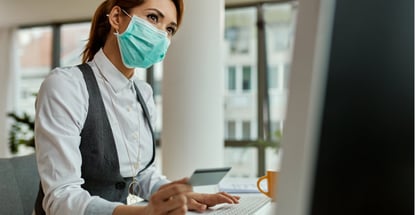 The COVID-19 pandemic has affected just about everything in 2020, and credit cards were no exception. From account balances to rewards offered and customer satisfaction among credit card issuers, the pandemic has altered the way consumers utilize credit.

Here’s a quick summary of what you need to know about credit cards during the COVID-19 pandemic.

Consumers paid down credit card debt in the early months of the pandemic. Credit card balances for open accounts decreased by an average of 10% from March 2020 to June 2020, according to a Consumer Financial Protection Bureau report, “The Early Effects of the COVID-19 Pandemic on Consumer Credit.”

The incentive for debt reduction may have come from a huge wave of job losses. That’s because people who aren’t employed may have less means to afford the interest charges of carrying a balance from month to month. Paying down debt can lower the expense. 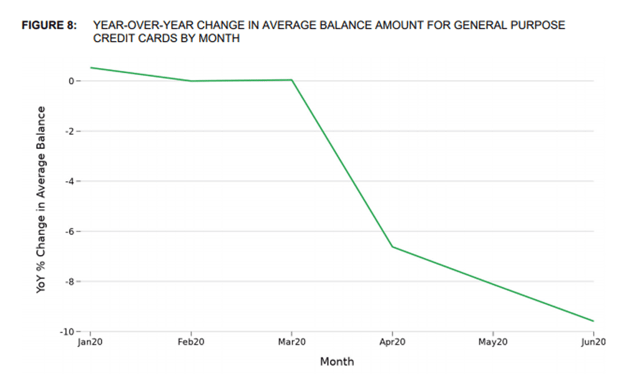 Credit card balances declined sharply between March and June 2020, with average balances almost 10% lower in June 2020 than in June 2019.

Funds for consumers to pay off debt may have come at least, in part, from government payments. Millions of taxpayers received $1,200 stimulus checks authorized by the federal Coronavirus Aid, Relief, and Economic Security (CARES) Act. Many newly jobless Americans, including large numbers of gig workers, were able to claim unemployment benefits.

The trend toward lower card balances was reflected across all demographic groups, including people in high-income and low-income neighborhoods. People who had higher credit scores, earned more income, lived in a majority-White neighborhood, or were in an area with a higher COVID-19 case rate, achieved relatively bigger drops in their card debt.

Economic shutdowns may have been a factor.

“To the extent that these borrowers lived in areas with major economic disruptions resulting from the national emergency, these borrowers may have had less opportunity to spend due to local-area closures,” the CFPB said.

The reduction in credit card debt was consistent with other data that showed a dip in consumer spending.

In a July 8 blog post, the Experian credit bureau reported that average card balances dropped 14% from $6,193 in January 2020, before the pandemic was widely acknowledged in the U.S., to $5,338 five months later.

“These trends show that, broadly, consumers across the U.S. have made some fairly drastic changes to their financial habits over the span of just a few months. Since the beginning of the pandemic, consumers appear to be either paying down their debt or at least not adding to their overall balances,” Experian said.

According to the company, consumers with an excellent VantageScore dropped their credit card balances by 23.2%, on average. That was the biggest reduction among the credit score categories.

The CARES Act offered financial relief for borrowers with student loans and home mortgages, but not credit cards. Instead, credit card companies were left to make their own hardship accommodations for borrowers.

Even though the government didn’t mandate hardship assistance for cardholders, delinquencies didn’t spike in the pandemic’s early months. In fact, new card delinquencies and the share of already delinquent accounts that became more delinquent dropped from February 2020 to June 2020, the CFPB reported.

Those trends held true regardless of consumers’ credit scores or demographic characteristics. In 2019, card delinquencies had been flat or gradually increasing.

Credit cards saw the second-greatest decline in delinquent accounts behind mortgage payments from January 2020 to June 2020, according to Experian data.

Though credit card relief wasn’t mandated, voluntary measures by the credit card companies may have helped consumers cope. Beginning in March 2020, there was a sharp increase in the share of accounts that had a balance but didn’t make a payment.

The data suggest those accounts received some sort of financial relief, according to the CFPB. Consumers who lived in areas with more COVID-19 cases, majority-Black or majority-Hispanic populations, or larger changes in unemployment were more likely to have received payment assistance.

Consumers may have felt comfortable skipping a payment since the CARES Act required card companies to report their accounts to the credit bureaus as current even if they deferred payment due to the pandemic. This protection applies from Jan. 31, 2020, until 120 days after the national COVID-19 pandemic is declared to be over.

Overall, credit limits on existing card accounts declined slightly between March and June 2020. Previously, credit limits had been generally on the rise.

Credit utilization dropped to a record low of 25% overall in May 2020, down from 30% five months earlier, according to Experian. Credit utilization measures the percentage of available revolving credit that consumers are using at a given time.

In early November, the Federal Reserve reported that the average credit card interest rate rebounded slightly to 14.58% in the third quarter of 2020, after dropping to 14.52% in the second quarter compared with 15.09% in the first quarter.

Rates for cards that were charged interest followed the same pattern with a small rebound to 16.43% in the third quarter after a drop to 15.78% in the second quarter compared with 16.61% in the first quarter.

Card customers love rewards programs, but not all rewards are created equal. Due to the pandemic, certain types of rewards may be less popular than they once were. Examples include travel perks, airline miles, dining out points, and ride-share rewards.

On the flip side, other rewards, such as free or discounted streaming services and points for grocery shopping, e-commerce, or delivery services, are in higher demand.

If consumers don’t like the rewards they’re getting, they could cancel millions of card accounts. Issuers that combine disappointing rewards with annual fees may prove particularly unappealing. 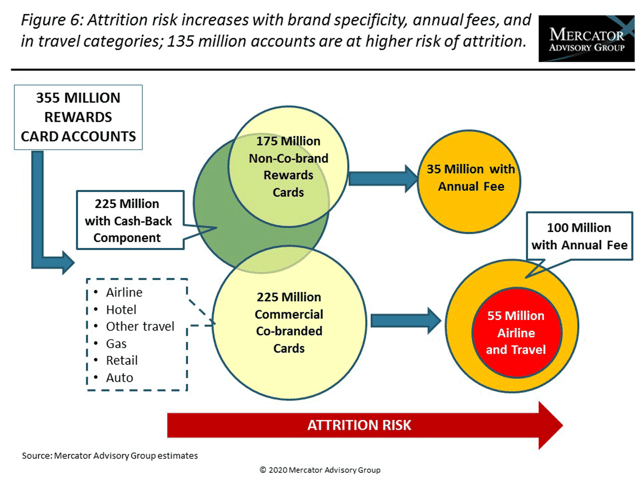 “While many consumers gravitate to cash-back rewards, co-brand programs that feature alliances with airlines, cruises, and hotels leave consumers with points that may not be useful for several years,” Mercator stated. “Rewards with cash options, such as those issued by American Express, Bank of America, Capital One, Chase, and Citi, will find consumers more likely to gravitate toward cash options than rewards that provide options for hospitality and travel.”

Contactless cards and mobile payments were having a moment this year, thanks at least in part to concerns about the potential spread of COVID-19 on surfaces.

Sixty-nine percent of retailers said they accepted some type of contactless payment, according to a survey released by the National Retail Federation (NRF), a trade group that represents retail businesses. That total included 58% of retailers that accept contactless cards and 56% that accept mobile payments.

Contactless cards can be waved near or tapped on a card reader to make a payment. Mobile payments can be made with a digital wallet that stores a card on a mobile device.

“The pandemic has clearly driven consumers to change their behavior and retailers to accelerate their adoption of the technology,” NRF Vice President Leon Buck said in a statement.

9. Consumers Planned to Keep Their Cards

A study by consumer satisfaction tracker J.D. Power found few consumers said they planned to switch cards during the pandemic. In fact, 89% of card customers said their current card fully met their needs.

“Through the first two months of 2020, credit card customer satisfaction was on track to set record highs,” said John Cabell, director of banking and payments intelligence at J.D. Power. “That reversed course when COVID-19 entered the equation, with satisfaction, trust, advocacy and brand image attributes resulting in sharp declines in May 2020.”

Overall card satisfaction dropped 10 points on a 1,000-point scale. The decline was led by lower satisfaction with card terms and card company communications. Only 36% of card customers surveyed indicated they’d been proactively contacted by their credit card issuer during the previous 12 months. 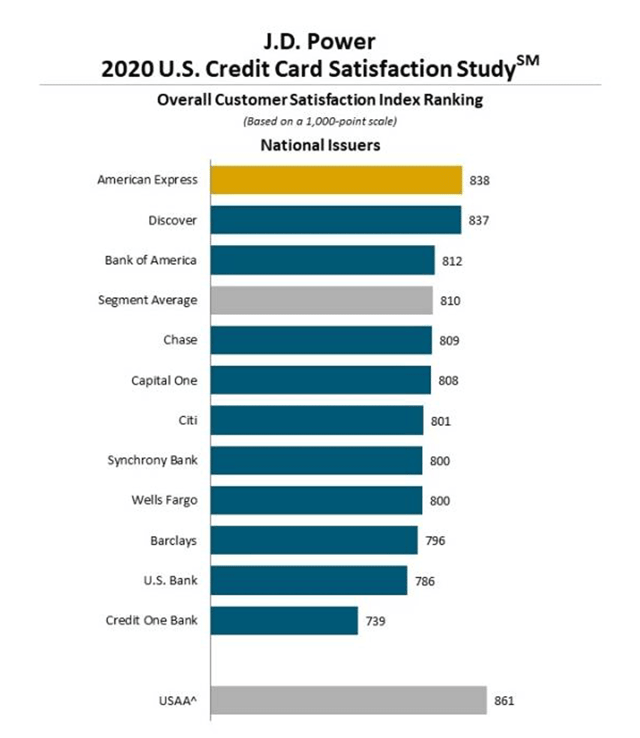 Credit cards were an exception to the broader trend. Consumers who’d used other consumer financial services, such as retail banks and primary mortgages, reported higher levels of satisfaction during the pandemic.

That higher satisfaction may have been due, in part, to better or more frequent communication. J.D. Power found 60% of mortgage customers and 48% of retail banking customers recalled receiving company communications during a similar time frame.

The sharpest declines in credit card company satisfaction were among consumers who were in the affluent/mass affluent group or were financially affected by the pandemic. Satisfaction in both groups declined 14 points since the start of the pandemic.

Overall, the COVID-19 pandemic has had a huge impact on the U.S. economy. Consumers and card companies have felt the effects and adjusted their behaviors accordingly.

“Issuers should ensure that customers understand the terms and benefits associated with their cards, and customers, in turn, should be willing to change cards if fee-based perks or travel points are no longer relevant in the current environment,” J.D. Power stated.

How to Choose a New Card

If you’re in the market for a new card or just want to research your options, follow these four simple steps:

With the COVID-19 pandemic far from over, the right cards in your wallet may be a huge help.

Could You Be Addicted to Credit Cards?

3 Ways to Get a Low APR on a Credit Card