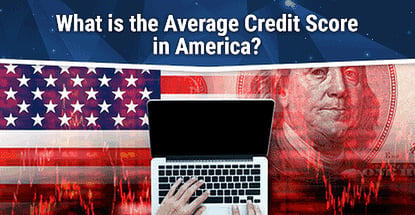 Whether it is healthy or not, people like to know how they measure up relative to others. It is human nature. Hopefully, you already keep tabs on the condition of your credit reports and where your personal credit scores fall on the standard scale of 300 to 850. If not, it is probably a good idea to check your credit scores from time to time just to ensure their health.

And even if you find out that your scores are solid, you may wonder how they stack up compared to those of your peers and perhaps even the rest of the U.S. population. The good news is, Americans are actually doing really well in the credit score department. The average FICO credit score in the United States has climbed to an all-time high of 711.

Experian, which released its eighth annual State of Credit Report earlier this year, revealed the average VantageScore credit score also rose to 675 in 2017.

What Are the Reasons for the Improvement?

There are several reasons that could explain the recent upward trend in the credit scores of U.S. consumers. FICO speculates that consumer credit education and consumer credit awareness may be among the catalysts for the positive change. Evidence supports that theory.

FICO reveals the following information about the two factors that have also caused the average credit score to rise over the past year.

One fact is certain — when your credit reports are cleaner, your credit risk goes down and your scores go up. When this happens among a broad group of consumers, the average credit score rises. It’s a mathematical certainty.

The Average VantageScore Credit Score by Region and State 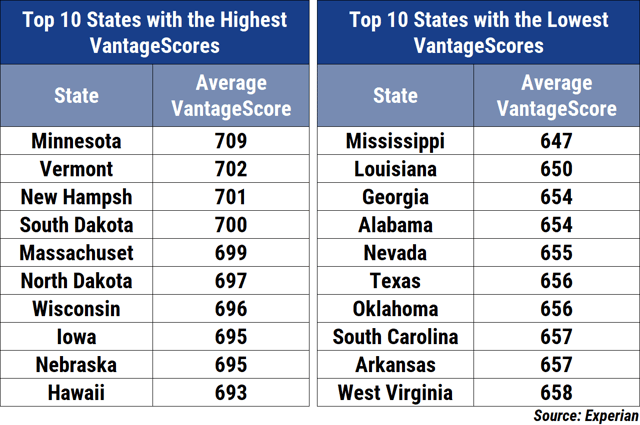 Although the average credit score of every age group improved this year, it remains true that older people have higher FICO credit scores on average. This is no surprise given that the older your credit reports the better.

The following chart shows the average FICO score distribution in the United States, according to age.

How FICO Credit Scores Are Calculated

FICO scores range from 300 to 850, with higher scores indicating you are a lower risk to potential lenders. Specifically, FICO scoring models evaluate the information contained in your credit reports and determine the likelihood that you will pay any credit obligation 90 days late, or worse, within the next 24 months.

Your FICO scores are based on five broad categories of information found on your credit reports.

If errors or misinformation on your credit reports are weighing your scores down, you can dispute them directly with each credit bureau — Equifax, Experian, and TransUnion — individually online.

How VantageScore Credit Scores Are Calculated

VantageScore credit scores have the same 300 to 850 range as FICO scores. However, VantageScore models calculate risk differently because it’s a different scoring platform.

VantageScore doesn’t provide specific percentages for its scoring factors, like FICO does, but it does explain which factors are relevant in your credit score calculation. Here is a look at the different categories of credit report data which are considered by VantageScore models.

While you can’t decide which credit scoring brand (FICO vs. VantageScore) or which scoring model a lender is going to use when you apply for financing, you can control, in part, the information that appears on your credit reports.

Manage your credit well by making on-time payments, keeping credit card balances low, and applying for new credit only when needed and you can’t help but have credit reports that will perform well regardless of the credit scoring model.

John Ulzheimer is an expert on credit reporting, credit scoring, and identity theft. The author of four books on the subject, Ulzheimer has been featured thousands of times in media outlets including the Wall Street Journal, NBC Nightly News, New York Times, CNBC, and countless others. With over 29 years of credit-related professional experience, including with both Equifax and FICO, Ulzheimer is the only recognized credit expert who actually comes from the credit industry. He has been an expert witness in over 450 credit-related lawsuits and has been qualified to testify in both federal and state courts on the topic of consumer credit. In his hometown of Atlanta, Ulzheimer is a frequent guest lecturer at the University of Georgia and Emory University's School of Law.

Why Credit Cards Help & Hurt Your Chances of Getting a Mortgage

5 Facts on CreditWise from Capital One

Can My Credit Card Issuer Update My Credit Report?