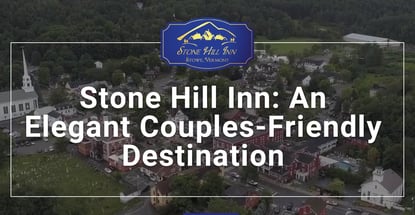 In a Nutshell: Vermont’s Green Mountains are a wonderful place for contemplation — and that’s where Stone Hill Inn comes in. Located a short distance from Stowe in the northern part of the state, Stone Hill Inn is a charming and elegant couples-friendly B&B where quiet connection rules. It’s perfect for proposals and elopements, but also for couples who’ve already made lots of memories. Amid all the beauty and adventure Vermont has to offer, Stone Hill Inn is an unmatched year-round card rewards destination.

Vermont, the Green Mountain State, is home to fall colors, ski season, and summers filled with hiking, biking, and river adventures. Alongside its famous maple syrup and farmhouse cheese, Vermont boasts more microbreweries per capita than any other state and supports a thriving wine industry.

The town of Stowe, near the state’s highest peak — Mount Mansfield — presents itself as the quintessential New England town, where visitors shop, dine, and enjoy seasonal and cultural festivals and celebrations.

It’s tailor-made for getaways, especially for couples looking to connect — or reconnect — in a place that’s best-experienced arm in arm.

A short distance from Stowe on the way to Mount Mansfield sits Stone Hill Inn, a nine-room couples-friendly bed-and-breakfast that perfectly reflects the charm and intimacy of the Vermont village experience.

Stone Hill Inn is a quaint yet modern single-story B&B where couples, including card rewards couples, of course, celebrate and enjoy all that Vermont has to offer. The inn is recognized year after year by TripAdvisor and is the winner of many other awards and recognitions. If you and a special someone are looking for a unique way to cash in credit card rewards, you may consider applying your points toward a statement credit — if your program allows — and using the extra cash to treat yourself to this idyllic getaway.

Kristie and Todd Roling have put their own stamp on Stone Hill Inn since 2016 when they moved from Dallas in search of a different kind of life. The Rolings dedicate themselves to providing all the comfort and nourishment couples need to make the most of a quiet New England getaway.

When the couple decided to make the move from Texas and become innkeepers, they planned a New England tour to evaluate properties for sale. But they didn’t get far.

“It was the second place we looked at,” Kristie Roling told us in a recent interview. “We literally walked in and went, ‘This is the one.’”

Stone Hill Inn is a New England B&B through and through, with its relaxed, sloped-roof ambiance. But because it was built in 1998 there’s no compromise on convenience.

“It’s all on one level, so there are no stairs for guests to worry about,” Roling said.

The inn’s nine elegant guest rooms have much in common — every room comes with a king-size bed and a Jacuzzi for two and features a double-sided gas fireplace facing the bedroom and bath.

Each distinctively decorated room has its own name reflecting the inn’s environs. 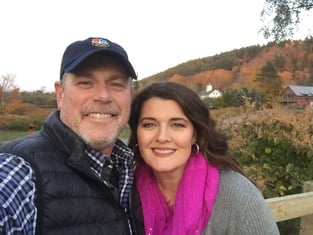 Todd and Kristie Roling are the owners of Stone Hill Inn.

“West Branch is a river, Moss Glen is a waterfall, and Sterling is several things including Sterling Pond and Sterling Gorge,” Roling said. “Fiddlehead is our local fern, and Catamount is our local mountain lion — and also the mascot of the nearby University of Vermont.”

West Branch and Fiddlehead are end rooms featuring more windows and more secluded patios than the other rooms. “West Branch even has a peekaboo view of Mount Mansfield depending on the season,” Roling said.

Situated on 10 forested acres, Stone Hill Inn also maintains gardens that supply flowers for the rooms and produce that serves as ingredients for Stone Hill Inn’s delectable cuisine by Todd.

It’s a combination that all card rewards couples will definitely enjoy.

“He just makes what he likes,” Roling said. “Everybody loves his pastries, and occasionally we’ll even throw in some of our Southern roots, like chicken and waffles or biscuits and gravy.”

Stowe and the Green Mountains Offer Plenty of Activities

Another room at Stone Hill Inn is called the Notch, in honor of one of the most spectacular attractions in an area filled with them.

“The Notch refers to a place in between the mountains called Smuggler’s Notch, which is right up the road from us — it’s a super cool place to go and see,” Roling said. “Rock climbers scale it. They used to smuggle rum up there — there are caves, all kinds of history, and waterfalls galore.”

Prioritizing activities is the chief challenge for Stone Hill Inn card rewards couples interested in exploring the Stowe area because there’s always something fun to do in Vermont.

To start with, Stowe is a well-known resort town that accommodates nearly 1 million visitors each year. Dining and shopping options abound, and a culture of festivals and celebrations is prevalent.

Certain attractions stand out, however. Stowe is in the heart of Vermont ski country, for example, and it’s a mecca for fall fanatics. But summer is becoming just as much of a draw as fall and winter.

“There are extensive hiking trails with these amazing waterfall hikes,” Roling said. “And the mountain biking scene is huge here.”

When there’s no snow, the mountain bikers co-opt the hills, hanging their rigs on the lifts to ride to the top and then rolling down with abandon.

Summer couples with something more sedate in mind will enjoy the area’s crystal clear lakes and rivers.

“You can book a kayak, they’ll shuttle you upstream, and then you just kayak back to your car,” Roling said. “You’ll meander down little brooks and under covered bridges — it’s so idyllic, so New England.”

As a couples-friendly resort, Stone Hill Inn’s ultimate specialty is romance. Card rewards couples will note that among the specials and packages offered by the Rolings, many are specifically designed around celebrations and life events.

“We do elopements and small weddings,” Roling said. “We set up everything including the justice of the peace, the flowers, and the cake.”
Couples celebrating honeymoons, babymoons, anniversaries, and birthdays also enjoy Stone Hill Inn, but it’s perhaps best known as a venue for proposals. 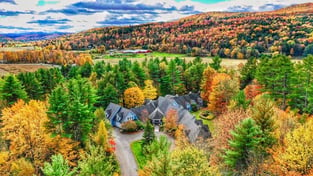 “The most popular is our summer proposal package,” Roling said. “We do a trail of rose petals out from the room all the way to the waterfall. At the waterfall, we set up a dozen roses and a bottle of champagne. And the ring is usually there too.”

The Rolings work with the proposing party to set it all up while the couple is out and about.

“And when they come back, it’s a surprise — they walk out the back door of their room, and there’s a rose petal trail leading out to the waterfall,” Roling said.

Who could say no to that? Moving forward, the Rolings plan enhancements to some of the trails they’ve constructed on the property to provide more nooks and crannies for proposals.

Not surprisingly, guests tend to return to Stone Hill Inn again and again, with one couple having visited more than 40 times. Another stays every summer for two weeks.

And now that Vermont is free of COVID restrictions for vaccinated travelers, the Rolings anticipate another exciting year of celebration and adventure.

“Sometimes you just want to get away for a romantic weekend, and that’s what we specialize in,” Roling said.

How to Leverage Credit Cards to Build Wealth