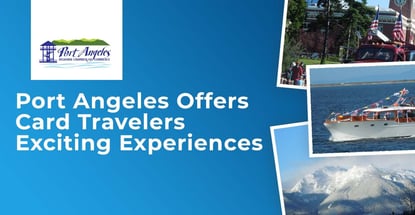 In a Nutshell: The city of Port Angeles, situated in northwest Washington State, is a gateway to Olympic National Park and some of the most spectacular and challenging outdoor experiences in the United States. Port Angeles also provides a respite from the weather in the Pacific Northwest as the city resides in a rain shadow, meaning it has a more temperate climate than most of the surrounding areas. In addition to its proximity to the outdoors, the city offers plenty of shopping, restaurants, and cultural attractions, making it a prime destination for travel card rewards enthusiasts.

In the contiguous United States, you can’t get much farther north and west than Port Angeles in Washington state. Separated by the Strait of Juan de Fuca from Victoria, British Columbia, directly to the north, Port Angeles is the last small city on the U.S. side of Washington’s Olympic Peninsula leading to the Pacific Ocean.

It serves as a gateway to the vast reaches of Olympic National Park. The park is a nearly 1 million-acre expanse of glacier-capped mountains, old-growth temperate rainforests, and rugged coastline that has been home to native people for at least 12,000 years.

Members of eight native tribes still live in and around the park, offering a direct connection to the past and contributing to the diverse and vibrant culture in the region today.

Port Angeles is part of that history, and was named by Spanish explorers who entered the region in the late 18th century. Spanish, English, and native languages are still spoken throughout the region, which has seen many settlers come and go over the centuries.

Port Angeles acts as a comfortable and walkable home base for card rewards travelers interested in exploring Olympic National Park — or finding another nearby adventure.

“We’re a popular place, and there’s a good reason for it,” said Marc Abshire, Executive Director of the Port Angeles Regional Chamber of Commerce. “The diversity of outdoor options is great here — there are tons of things to do.”

The Outdoor Capital of the Pacific Northwest

Olympic National Park and the adjoining national forest are central to the appeal of Port Angeles. The park has something for everyone, with activities including kayaking, fishing, hiking, camping, backpacking, and a variety of winter activities.

Novice card travelers, experienced hikers, and everyone in between will find adventure in the park’s diverse range of ecosystems and landscapes or at one of more than 650 architectural sites.

The park does present its challenges, however.

“It’s the only national park that doesn’t have a road that goes all the way through it,” Abshire said. “There are fingers that go into the park, but the center is a bona fide wilderness area that’s only reachable on foot or horseback.”

Of course, there are many other outdoor experiences closer to Port Angeles. These include the Olympic Discovery Trail, a 130-mile paved multiuse path that traverses directly through the city on the way to Sequim to the east.

“It winds along the water, and some of it goes through forested areas, by a lake, and through tunnels,” Abshire said. “It’s gorgeous.”

Mountain biking enthusiasts also flock to Port Angeles to participate in Ride the Hurricane, a summer hill climb event that starts at sea level and ascends a mile high in the park. Gravel cyclists also enjoy exploring miles of old forest roads and competing in other area events.

Another interesting aspect of the city is that it sits in a rain shadow. The peninsula blocks a lot of rain-producing weather from reaching the city, making it drier and more temperate than surrounding areas.

“We have a covered ice skating rink downtown, but because it doesn’t get that cold here, we have to use a chiller to keep it frozen,” Abshire said.

After a day filled with physical activity, downtown Port Angeles offers an attractive respite for card travelers. The city center is a quaint, walkable four-block district featuring many independent restaurants, with not a chain in sight.

Culinary highlights include fresh Dungeness crab, a staple all along the Pacific Coast that’s named after the Dungeness River near Port Angeles.

“It’s the best in the world,” Abshire said. “We don’t use Old Bay here because it takes away from the great flavor of the crab.”

Music venues, reasonably priced hotels and B&Bs, and a popular craft brewery are also prominent. The city also provides ample shopping and entertainment opportunities, with the city’s calendar highlighted by a series of annual festivals running from late spring to early fall.

First in the festival lineup is the Juan de Fuca Festival, a music and arts festival held on Memorial Day weekend. Each year, performers, artisans, food vendors, and community partners from across the Olympic Peninsula and beyond turn Port Angeles into a mini cultural hub.

A July attraction in nearby Sequim is the Lavender Festival, celebrating the north peninsula’s growing influence as a producer of the fragrant purple-flowered herb. In September, the Forever Twilight Festival celebrates the town of Forks near Port Angeles that played a significant role in the “Twilight” book and movie series.

“Forks was the setting for the series,” Abshire said. “And a restaurant in Port Angeles called Bella Italia was where the main characters went out on their first date.”

Festival season ends with the Dungeness Crab & Seafood Festival in October when foodies and friends gather to celebrate the peninsula’s diverse offerings and enjoy all the fun that goes along with it.

“We’re talking 20,000-plus people over that weekend,” Abshire said.

Connecting Travelers to the Olympic Peninsula

Dungeness crab is more than food up on the peninsula, however. Each year the Dungeness Crab & Seafood Festival begins with a blessing of the region’s first peoples to acknowledge the role of this traditional food source, with stories and songs ushering in the event.

It’s an appropriate way to close out the primary travel season in Port Angeles. Card travelers and all who revere that connection will find the festival prompts reflection and celebration.

“Five tribal reservations near Port Angeles have their own museums, histories, and areas to visit,” Abshire said. “They also made surplus COVID-19 vaccines received from the federal government available to all residents here, so we’re right up there with one of the highest vaccination rates, mainly thanks to the tribes.”

Clallam County, where Port Angeles is located, actually had one of the lowest COVID-19 infection rates in the nation as a result. Now, everything is open again, and the summer travel season is well underway.

Flights go to Sea-Tac International in Seattle. From there, a drive south through Tacoma or a ferry ride and a drive along the coast complete the journey to Port Angeles.

“The ferry ride is an experience on its own,” Abshire said. “It’s fun to drive onto the boat, see the sights, and drive off on the other side.”

Once travelers arrive, it’s almost as if they’re in a world of their own, with nearly limitless opportunities to experience adventure.

“You have a lot of choices,” Abshire said. “We’re seeing people from all over.”