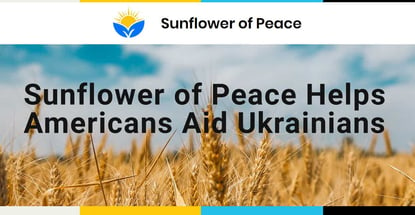 In a Nutshell: Since 2014, Sunflower of Peace has been providing financial resources for humanitarian projects in Ukraine. During times of conflict, Ukrainian military forces rely on the organization for medical resources and supplies. Americans interested in supporting vulnerable populations, and paramedics and doctors working in Ukraine can donate time and financial resources to Sunflower of Peace. And many credit card loyalty rewards programs allow participants to donate their accrued mileage, points, or cash back to charitable causes.

Sunflower of Peace is a Boston-based nonprofit committed to helping Ukrainians — including those impacted by the Russian invasion. The organization recently hosted a fundraiser to help paramedics and doctors supporting military forces in war-torn areas. The event helped the nonprofit donate medicine, medical instruments, and first-aid backpacks that will help medical workers save lives.

The fundraiser was also designed to raise awareness internationally. While the conflict initially received international attention, Sunflower of Peace volunteers want to keep the war on the forefront of people’s minds.

“We want to tell people, ‘Please keep talking about Ukraine and don’t just brush it off.” Right now, what we’re doing with the fundraiser is a bold move to get more people on board,” the nonprofit’s Founder Katya Malakhova told us.

Sunflower of Peace was founded in 2014, and since then has worked to empower orphans and internally displaced persons. Recently, its efforts have extended to those affected by COVID-19 and the Russian military invasion, which began in February 2022.

Malakhova said she was inspired to create the organization when Russians invaded eastern Ukraine and Crimea nearly 10 years ago. During that conflict, Malakhova, whose father is from Ukraine, mobilized groups of Ukrainian-Americans in Boston to support the region.

Malakhova and her group of volunteers helped during the illegal Crimean annexation, and they provided support for other humanitarian projects. The nonprofit always welcomes funding, and will need even more after the current war ends to help rebuild and restore the country.

The nonprofit derives its name from the country’s national flower, which, since the war with Russia started, has been used symbolically to represent solidarity and peace.

Directing Funding Where It Helps Most

In Sunflower of Peace’s early years, one of the most concerning aspects for the organization was how ill-prepared the Ukrainian army was for conflict.

“When the [conflict in the Donetsk and Lugansk regions] started, we went to something more drastic because those were our neighbors, our classmates, our relatives who were going to the frontline. Plus, at that time, Ukraine had no army because it was all dissolved. So first, soldiers just had Ukrainian bracelets to be recognized on the battlefield and jeans. We were actually buying uniforms, boots, and sleeping bags,” said Malakhova.

The nonprofit recognized that the army didn’t have sufficient medical training or supplies. Ukraine army medics specifically needed crucial supplies like quality tourniquets and blood clotting medicine to treat the most urgent injuries on the battlefield. Malakhova said the group researched the supplies American medics are equipped with, including backpacks filled with tools that allow them to save 10 to 15 lives.

Sunflower of Peace decided to create similar backpacks and ship them to medics in Ukraine.

“They have everything there. Surgical tools, IVs. Anything that you can stabilize a person with before they have medical care in a hospital. That was the idea, and it can actually be more effective on the battlefield and the frontline,” Malakhova told us.

The conflict in the East of Ukraine subsided, and by 2016, Sunflower of Peace turned to non-military projects. For example, the organization focused on building playgrounds for children affected by war, as well as providing educational opportunities for Ukrainian genetics scientists. The Sunflower of Peace team secured proper diagnostics and treatment for Ukrainians by bringing together the best researchers and oncologists from Boston and Ukraine to map the human genome.

When Russia invaded Ukraine in February 2022, however, Sunflower of Peace returned to its original mission: providing funding for medical supplies.

“It’s not just the medical backpacks; there are three levels that we provide for experienced doctors. The second level is for experienced paramedics. And the third one is for non-experienced paramedics. We try to do it very quietly because our work puts our drivers, people who help us in the end, and the recipients in danger. Because if the opposition sees they can just easily come in and confiscate them — in the best case scenario,” Malakhova said.

How to Get Involved With the Organization

There are several ways that those interested in supporting Sunflower of Peace can offer either time or money.

Interested volunteers can fill out a Google Form describing their availability and what they want to help with. Some volunteers want to come to the nonprofit’s warehouse to help prepare and ship medical supplies. Others contact the organization saying they would like to fundraise on its behalf.

Current volunteers will reach out to interested parties if and when the organization identifies a need.

If someone can’t volunteer their time, the organization also takes financial donations via credit card, PayPal, Facebook, or check.

Some credit cards, hotels, or airlines allow their cardholders to donate cash back, points, or miles to charity. To donate loyalty rewards, navigate to the card’s charity page. Sometimes, only big-name charities are available, but some financial institutions also allow for donations to organizations like Sunflower of Peace.

Sunflower of Peace also encourages individuals to purchase items from its Amazon List.

“We are very grateful for people because, when we would run out of items, we would receive a lot of things from people who would be donating through the wish list. So that still is very valuable, because we always run out of things. The troops keep operating, so there’s always waiting three or seven extra days,” Malakhova told us.

Communicating With the Front Lines to Address Needs

During the war, Sunflower of Peace continues communicating with people on the frontlines to understand their needs. Currently, Ukrainian troops are seeking medical supplies.

Once the organization receives a request for aid, the Sunflower of Peace board gets together to decide if it can take on the project and how quickly it can respond with assistance. It also considers the overall impact of the requested project.

“Right now, for example, we’re expanding our operations to provide ambulances, and we’re trying to look into providing armored bulletproof ambulances. Our doctors are always being shot at and we just need to find a way to keep them safe,” Malakhova said.

The nonprofit also continues to send medicine to occupied territories, especially to those organizations supporting orphans and other vulnerable populations.

It is also expanding its energy program by sending solar panels and generators to areas with interrupted energy supplies.

Sunflower of Peace wants the war in Ukraine to end as quickly as possible. And once that happens, the organization will continue to make an impact in the country. As it has done before in times of peace, the nonprofit will support other humanitarian causes that will help Ukrainians prosper.

“After all these months, people may try to push away thoughts about what’s happening in Ukraine; it’s normal to get fatigued from thinking about the atrocities and people’s suffering,” said Katya Migacheva, Sunflower of Peace Executive Director. “But we cannot afford to let Ukraine slip from our minds. We also would like to talk about Ukraine not only as a country under siege–but as a powerful, resilient, beautiful country that the world is getting to know now.”

Adaptive Adventures Supports Athletics for Everyone