With a Focus on Anti-Corruption, RepresentUs Aims to Bring Conservatives and Progressives Together to Ensure the Integrity of American Democracy 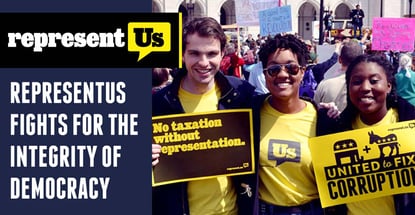 In a Nutshell: No matter where people fall on the political spectrum, it’s easy to see that money and special interests have a profound impact on American democracy. And surveys show that the vast majority of Americans — Republicans, Democrats, and Independents alike — believe their votes don’t count. RepresentUs set out to change that dynamic by empowering conservatives, progressives, and everyone in between, to make the democratic process work for them. It accomplishes that through grassroots state and local campaigns aimed at protecting voting rights, restoring electoral integrity, and negating the influence of special-interest campaign financing.

Those on all sides of the political debate can generally agree that elections should represent the will of the people. Unfortunately, most Americans don’t believe that’s the case today.

Public trust in government is at an unprecedented low. A recent survey by Pew Research Center found that only 17% of American respondents say they trust elected officials in Washington, D.C., to do what’s right.

And that lack of trust translates into low voter participation. Pew also reported that among 32 developed democratic member states in the Organization for Economic Cooperation and Development, the U.S. ranks 26th in voter participation. Less than 56% of eligible American voters cast presidential ballots in 2016.

That’s why a grassroots movement representing conservatives, progressives, and everyone in between arose to combat voter apathy and mistrust. RepresentUs works within the constitutional framework to pass practical ethics, conflict-of-interest, transparency, and campaign finance laws in states and municipalities to return government control to the people.

And it works on those initiatives at the state and local level, which is far more effective than taking on federal bureaucrats who may not be motivated to change anything.

“It’s important that this movement exists because it’s about having a government that actually represents everyday Americans as opposed to the tiniest slice of billionaires,” said Renaldo Pearson, RepresentUs Director of External Affairs. “And more folks are agreeing with us — in red and blue states alike.”

Americans have good reason to believe that the government doesn’t represent them. A recent Princeton University study indicated that the level of public support for a given issue has almost no impact on the laws Congress passes.

“The preferences of the average American appear to have a minuscule, near-zero, statistically non-significant impact upon public policy,” the study found.

Perhaps unsurprisingly, it turns out that the real driver of policy isn’t public opinion, it’s money. And the nearly flat curve revealed by the Princeton study between public support and legislative performance doesn’t hold for Americans with incomes in the top 10%. When economic and business elites who can afford lobbyists want something, the government is much more likely to make it happen than if support for the issue emanates from the bottom 90%.

RepresentUs helps Americans ensure their voices are heard through legislation at the local level.

According to Pearson, that clearly isn’t fair. “So that’s what we’ve been laser-focused on — how do we unrig the system in a strategic way that builds public trust and increases voter turnout,” he said.

That means attacking the influence of money in politics, which is why RepresentUs chose not to go up against Congress directly. Instead, it takes advantage of the federalized structure of American government to make what it calls “an end-run around Washington.”

“The great thing is the Constitution says that election law is squarely in the hands of the states — and that’s where we’re winning,” Pearson said. “We’re winning these anti-corruption and pro-democracy victories at the state and local level.”

Raising Awareness in Both Red and Blue States

The 2018 midterm elections were a watershed moment, with nearly two dozen policy victories in states and municipalities. RepresentUs is winning in liberal states (California, Massachusetts, and New York), conservative states (Missouri, North Carolina, and Tennessee), and in toss-up states (Michigan, Ohio, and Pennsylvania).

But every city and state has a unique political makeup and priorities, so RepresentUs tailors its strategies to those local conditions and imperatives.

“We want to ensure we have a government that represents everyday Americans,” Pearson said. “Whether it’s independent redistricting commissions to combat gerrymandering, restoring voting rights to returning citizens with past felony convictions, automatic voter registration, or publicly funded elections — these are the proven measures that help unrig the system and encourage higher voter turnout.” 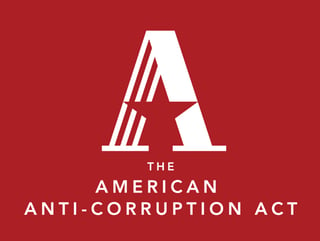 RepresentUs also fights for reforms, including ranked-choice voting, where voters rank candidates in order of preference, and voting at home, which works to significantly increase voter turnout. In November 2019, New York City continued the movement’s winning streak by adopting ranked-choice voting, which tends to mitigate excessive partisanship in campaigning and encourage third-party participation.

The movement’s work is all based on the foundation of its own American Anti-Corruption Act, which sets standards for electoral reforms taking place on every level.

“We’ve got to fix democracy first if we’re going to advance in earnest on any other issue, existential or not,” Pearson said. “Whatever the issue is, right now, we’ve got a broken government — and Americans, for the most part, agree on that.”

RepresentUs: Bringing Reform from States to the Nation

Thousands of volunteers support RepresentUs in its mission to return government power to the people of the United States. Many of those volunteers participate in its online Action Brigade or join local organizing teams. Individuals can also join The Common Wealth to provide monthly donations or support RepresentUs monetarily in a variety of other ways.

RepresentUs has also produced videos, including one titled “Unbreaking America: Divided We Fall” starring actor Michael Douglas, to get its message out.

And on August 6, 2019 — on the anniversary of the 1965 passage of the Voting Rights Act — Pearson began his own dramatic communications campaign, walking more than 700 miles from the final resting place of Dr. Martin Luther King in Atlanta to the U.S. Capitol building.

“The main goal of the walk was to break the silence about voter suppression. My grandparents did not sacrifice their lives for the right to vote just to see the votes of their children and grandchildren purged a generation later,” he said.

Pearson’s destination also indicates that although RepresentUs currently aims its work at states and cities, that won’t always be the case. Fixing Washington is the movement’s ultimate goal.

With RepresentUs poised for more victories in the 2020 elections, it sees the composition of state congressional delegations changing until they reach a tipping point — perhaps as early as 2022. The rush of reform in the states will lead to changes in federal law — and the flat curve for the 90% will start to transform into something more representative.

“This is really a bipartisan moment — a rare collaboration we’re seeing at the grassroots level, local and state, in terms of winning these anti-corruption measures,” Pearson said. “Folks in office would do well to catch up and follow the people’s lead.”