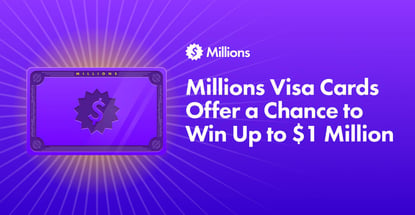 In a Nutshell: The Millions Card works like a debit card but gives card users the opportunity to win a number of prizes, including the chance to win up to $1 million. Cardholders can also win prizes by playing Swipe Streak, Daily Drawing or Spin That Wheel. The card is an engaging new way to have fun while spending. Most users have given the Millions Card highly positive feedback.

Winning the Jackpot has never been easier. And there’s no need to buy a lottery ticket or go to the casino. In fact, there’s really no risk at all.

Merely swiping the Millions Card can garner the chance to win $1 million.

Credit card rewards can be a very luring incentive, especially with sign-up offers and the maximizing of reward points. And it is a luxury that more often benefits those with better credit and higher incomes. Such credit card use can even earn a user an extra $1,000 per year.

Debit cards on the other hand don’t offer any kind of perks for activating a card or reward points of any kind. We just use them to pay for things and that’s it.

So millions of Americans simply cannot afford to spend thousands upon thousands to earn certain perks, or they prefer to spend on debit cards with no cash back offers, and are locked out of spending rewards.
What originated the idea for the Millions Card is that people who use debit cards deserve to be rewarded for their spending, just like those who use credit cards.

People may wonder how it’s possible for a card to give away all of these prizes. The reason is that whenever a debit or credit card is swiped, the store pays a merchant fee to Visa, Mastercard, or whoever issues the card.

It’s a fee that covers the costs associated with accepting debit and credit cards, and is split between the card issuer and the affiliated bank.

So whenever someone uses a Millions Visa card, the company earns a small amount of what is spent. The process is known as interchange. It costs the cardholder nothing, but it allows the issuer to generate revenue. Millions then collects that revenue and turns it into more opportunities for card users to win potential rewards.

For every dollar cardholders spend using the Millions Card, they earn one “Millions Ticket” that can be used to win a share of up to $1,000,000. “The average cardholder’s win rate equates to roughly 12% cash back, but there’s also a “what-if factor” for the $1M prize,” said Tebbs.

No additional rewards are included for hotels, flights or other leisure spending. There is also no annual fee and no minimum monthly fee. Cardholders can also enjoy using 55,000 charge-free ATMs, and an available two-day early direct deposit.

“Millions has a huge amount of new releases on the roadmap,” said Tebbs. “You’ll see the Millions Card in other markets soon. I can’t say too much, but here’s a feature I can drop: You’ll soon be able to send money to other Millions users.”

Aside from the chance to win $1 million, cardholders can also win rewards in several other ways.
With Swipe Streak, if a user swipes their card five days in a row, Millions will hand out 100 free tickets, which is 100 opportunities to win the daily sweepstakes. But the Swipe Streaks must be qualifying transactions for five consecutive weekdays (Monday-Friday).

Spin That Wheel gives users a fun, interactive way to win a refund on their last purchase (up to $1,000) daily. It can be spun once per day as long as a qualifying transaction has taken place.

And lastly, the Daily Drawing gives users the chance to win up to hundreds of dollars every single day. That’s incredible!

So far, users are really loving the excitement that Millions generates. “They’re typically moving to Millions from a big, boring bank where the highlight of their previous banking experience is a hold time that’s under 20 minutes,” Tebbs teased.

With Millions, customers get all of the benefits they are familiar with at a big bank, like FDIC insurance, free ATM access, and a Visa debit card, but also the chance to win big.

“Everyone that uses Millions loves it. It can be rare to find businesses that are built around giving back to their users, and Millions does it in such a fun way,” said Tebbs.

“We love to hear from our users and we’re always listening to what they have to say,” said Tebbs. “We have a super-engaged social presence with over one million followers on Twitter, TikTok, Instagram and Reddit, and users often use these platforms to make suggestions.”

Feedback is also solicited in the Millions app every so often. The Millions team asks users to share their thoughts. Every single comment, review and story is read by the core team.

“It’s really special to hear stories from our winners. Every day there’s at least $500 won in the Millions app, and that is split between individuals across the entire country,” said Tebbs.

“We’ve had teachers use their winnings to buy supplies for their classroom, grandparents who use their Millions wins to throw a birthday party for their grandchild, families use their wins to go grocery shopping.”

“It’s amazingly rewarding to hear these stories, especially when they’re attached with pictures.”