In a Nutshell: For nearly 80 years, Farmers & Merchants Bank has helped folks in Wisconsin weather change by welcoming them in like family. The single-branch bank is located near Lake Winnebago in the farming and manufacturing community of Berlin — where it also focuses on supporting local residents. Not only does the institution offer resources to educate students in Berlin, but it also empowers its employees to support causes they’re passionate about. For its dedication to the people in its service area, Farmers & Merchants has earned our Editor’s Choice™ Award for Community Commitment.

Almost every weekday morning, you’ll find Farmers & Merchants Bank President Emeritus John Kujawa, having coffee and chatting with a group of friends. When his father, Harry Kujawa, founded the bank in 1940, the goal was to create an environment where “farmers felt comfortable coming in straight from the fields to do their banking business.”

“To this day, we have that same feeling of, ‘just come on in,’” Farmers & Merchants Bank Public Relations Coordinator Rebecca Wenig said. “It’s a very casual, friendly setting; a comfortable place where everyone knows everyone else by name.” 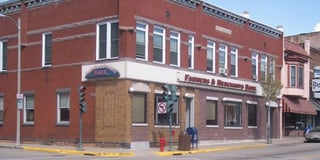 Farmers & Merchants Bank has been family-owned for generations dating back to World War II.

Its headquarters has always been in Berlin, a town located in a predominantly agricultural section of east-central Wisconsin. And for nearly 80 years, the bank has facilitated Berlin’s growth and helped its people weather changes.

“We’ve always been family-owned, and we continue to be a one-branch bank,” Wenig said. “Our mission is to make sure that our customers feel like they are part of our bank family.”

Bank employees benefit from that same family atmosphere, and you may see them leaving work early to support their children at sporting events or other after-school activities.

That dedication to customers, employees, and causes has earned Farmers & Merchants Bank our Editor’s Choice™ Award for Community Commitment.

Empowering Employees to Donate to Causes They Feel Passionate About

Farmers & Merchants Bank expresses its loyalty to customers by offering a range of competitive personal and business banking products and tech tools — including a convenient mobile app. The bank shows its devotion to the community by continuing a tradition of giving that stretches back to the bank’s early days.

The bank places a significant portion of its charitable strategy directly in the hands of its employees through their GIVE360 program.

“When employees go out in the community and volunteer for 10 hours, they receive a $500 check, written in their name, that they can give to any organization or cause they feel passionate about,” Wenig said. 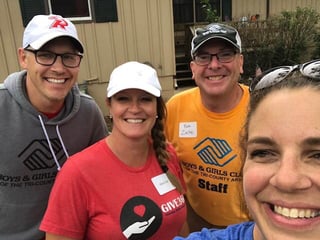 The bank provides support for causes and issues about which its employees are passionate.

Employees tend to focus their giving on causes with which they have a personal connection, and, with permission, the bank posts their stories on its Facebook page.

One employee whose son suffered a life-threatening brain injury donated her check to the nonprofit Brain Injury Resource Center located in nearby Waukesha.

Another employee lost her fiancé to a rare form of cancer and contributed her funds to support cancer research. The bank shared her story, in which she wrote: “Farmers & Merchants Bank’s Give360 program is wonderful. The fact that each employee gets the chance to turn their volunteer hours into a monetary donation to donate to anyone or anything they want is just amazing. It means so much to not only the receivers of the donation but also to the employee as well.”

So far in 2019, a total of 20 classrooms have teamed up to accomplish seven giving projects, with Farmers & Merchants Bank donating $1,500 to support their efforts. 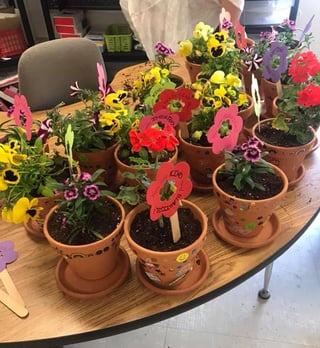 “It is a significant community initiative,” Wenig said. “For example, one classroom decorated flower pots and delivered them to local assisted living facilities.”

Wenig and two of her colleagues helped that class of first-graders fashion their flower crafts and create “kindness messages” to remind everyone that small acts can go a long way.

Another group — a team of second graders and kindergartners at Clay Lamberton — created Easter baskets — including candy, tissues, notepads, and other treats — to give the residents of a care facility.

Students at All Saints Catholic School used Kindness Project resources to write inspirational notes and bake heart-shaped cookies to give to each other and their volunteer helpers and bus drivers. They also created 500 thank-you notes that they handed out to families leaving church to thank them for their support and ask them to pay the act of kindness forward.

Connecting with Customers Via Education & Outreach

The bank also does its part to build the next generation of contributors in Berlin and encourage positive financial outcomes among community members.

Young and old alike benefit from the financial education resources contributed by Farmers & Merchants. The bank recently helped third-graders at Clay Lamberton with a save or spend activity led by several bank employees.

“The moral was that you can go buy things right away with the money you earn,” Wenig said. “But, if you work a little harder, and save a bit longer, you can buy something better with your money than one short-term product.”

Farmers & Merchants Bank also provides resources to teach Berlin’s senior residents how to protect themselves from scams that target the elderly.

“If a customer suspects they may be a victim, they can just give us a call, and we’ll do our best to help them out,” Wenig said.

And that commitment to personal outreach is extended to every Farmers & Merchants Bank customer. And its traditions help the bank bring customers and community members together — and everyone benefits.

“We’re not going anywhere,” Wenig said. “We’ve made it almost 80 years now, and we plan on sticking around for a long time.”