Dollar Flight Club Alerts Members to the Best Deals from Their Home Airports, Often Saving 60% to 90% off Standard Fare 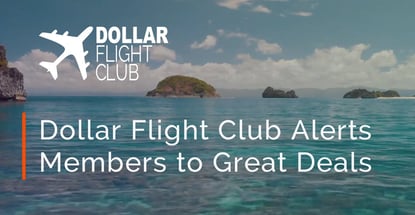 In a Nutshell: Dollar Flight Club is a subscription service that helps travelers find great deals on flights from their home airports. The service is available at free, premium, and premium-plus price points. Premium-plus members will recoup their $100 membership fee about 10 times over by booking just one flight, according to the company. Dollar Flight Club finds its deals by working with data partners and its team of in-house flight experts. The company recently launched The Hotel Project, a subscription service structured like Dollar Flight Club that brings big savings and perks to members booking hotels.

Jesse Neugarten is a born traveler.

Neugarten was born and raised in Cape Town, South Africa, but he also claims San Diego as a formative location growing up. As a child, he frequently visited family in the U.S. and all over the world.

Neugarten took his passion for traveling and turned it into Dollar Flight Club, a subscription service that helps members save big money on domestic and international flights. The founder said he became interested in startups after graduating from college and began exploring the idea of a subscription-based travel service.

So the motivation behind launching the company didn’t exactly come out of thin air.

But in a sense, it did. Neugarten credits a 2015 trip he made to Nepal, which claims the world’s second-highest average elevation above sea level, as the driving force behind starting this company.

“We got stranded over there after a massive earthquake that was really devastating,” Neugarten said. “It really turned on a switch, and I realized this is the time to start something to help as many people as I can. You might not have as much time as you think.”

Neugarten’s friends and family thought the harrowing experience might have been the end of his traveling days. But he would quickly prove them wrong.

“A few weeks later, he’d travel hacked his way to a round trip flight from NYC to Stockholm for $210,” according to the company website. “That trip led him to Stockholm, Northern Sweden, Paris, London, Brussels, Amsterdam, and London.”

Members Can Choose from Free, Premium, or Premium Plus Plans to Save on Flights

Since its launch, Dollar Flight Club has saved its 1 million-plus members more than $5 million. The company has helped members from more than 100 countries find great deals in 1,500-plus airports around the world.

“At a high level, our goal is to save customers $500 on every international flight they book and $350 on every domestic flight they book,” Neugarten said. “We offer a free membership — it’s absolutely free to sign up and try out the service.”

Jessie Neugarten is the Founder of Dollar Flight Club.

He said members who sign up for the free subscription will receive several deals per week and can use the service for as long as they want to.

“But then we also have a premium membership, which gets you more personalization tools to select specific departure airports,” Neugarten said. “And you get four or five times the amount of deals, plus our premium-only deals, which are our best ones.”

Dollar Flight Club’s premium membership costs $69 per year, but free members can try it for free for 14 days. All deals in this tier are for economy flights.

Neugarten said that, even if premium-plus members only book one flight per year from Dollar Flight Club’s alerts, the average discount of $350 to $500 per ticket, will more than pay for the cost of membership.

Dollar Flight Club does not earn commissions nor does it receive any money when members book a flight, Neugarten explained. Instead, it relies on membership fees for revenue.

How Dollar Flight Club is Able to Deliver Low Rates

“A lot of feedback we get is people saying there’s no way you can fly to Europe for $250 round trip or to Asia for $250 round trip,” Neugarten said. “But, as a matter of fact, you can. You just have to know where to look. And that’s really where our expertise lies.”

Dollar Flight Club’s flight experts work together with the company’s data partners to find deals that are between 60% and 90% of the standard fare, he said.

“We work with partners who are hooked up directly to the global distribution systems (GDS), which is really raw flight data for the airlines,” Neugarten explained. “So we’re able to bring in that data to our backend system that really parses through all of that, and it pops out the most relevant and best-priced deals for our customers.”

Next, Dollar Flight Club’s experts vet the deals personally before the company sends them to members.

“The Dollar Flight Club team is a group of travel-loving, cheap flight hacking humans that you might have seen around the web or in real life,” according to the company website. “We love finding and sharing cheap flights with our members and booking them for ourselves as well.”

The team works 100% remotely from all over the world.

“Our mission is to alert you when cheap international and domestic flights pop up from your home airport to save you hundreds on airfare so you can explore the world,” according to the company.

Neugarten said Dollar Flight Club saves its customers valuable time and money when they’re planning their next adventure with its subscription-based model that delivers deals to members’ email inboxes,

“We booked flights to New Zealand for $250 roundtrip! Saved $1,800 on airfare!” writes Paula C. on the Dollar Flight Club website. “We hiked the Tongariro Alpine Crossing, which is the location for Mount Doom in Lord of The Rings!”

“The no-commission model is something we focused on for flights,” Neugarten said. “Obviously, as you grow, hotels are just a natural next step to provide value to customers who are booking flights.”

The Hotel Project provides members with exclusive discounts and perks at the world’s best hotels.

“We take no commision from our hotel partners so our members get all the savings. We make each hotel have a minimum perk value of $25. Our members get unique perks, free upgrades, and discounted bookings.”

As with Dollar Flight Club, people can join The Hotel Project for free to view all hotel partners and member perks. The premium membership tier which offers access to significant savings goes for $20 per year.

“Get up to $200 in discounts or perks with each hotel booking,” according to the company. “At just $20/year, the membership pays for itself up to 10x when you book your first hotel.”

Premium members can enjoy free room upgrades and other bonuses like free bike rentals, late checkout, and welcome drinks, among others.

“There are a ton of benefits. Because the hotels don’t pay commission to us, they can pass the savings on to the customer!” according to The Hotel Project website.

Neugarten said The Hotel Project launched in March, but because of the COVID-19 pandemic, the company will do another launch once things settle down.

With its nominal membership fees, joining Dollar Flight Club and The Hotel Project pay for themselves after just one booking. Although many of us are staying home and avoiding leisure travel these days, these valuable subscription services offer something to look forward to when we book our next getaway.

Gary Arndt Shares His Travels on Everything Everywhere