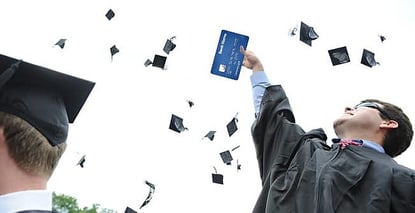 In an ideal world, college tuition is paid with scholarship funds or saved cash. Student loans are the next best thing. If you’re tempted to reach for your credit card the next time you or your child’s tuition is due, think again.

A new study reveals the credit card processing fees charged by most colleges and universities are costly and may negate any rewards benefit.

The study examined tuition payments at 300 private, public and community colleges, choosing the largest 100 of each kind based on attendance. It found 87 percent of schools surveyed, which amounts to 260 colleges and universities, do accept credit cards for some form of tuition payments.

Institutes of higher education clearly understand the desire for people to pay with plastic. But should you do it just because you can?

The bad news — in exchange for the benefit of paying for tuition with a credit card, many schools charge convenience fees to cover processing costs. If they don’t charge a fee, the schools must pay merchant processing fees, which can amount to millions of dollars.

Some aren’t able to assess a fee to cover the costs. For example, the University of Wisconsin-Madison doesn’t accept credit cards because a state regulation prevents the school from building credit card fees into their tuition rates. Other schools made the decision that it’s just not worth it.

Northeastern University no longer accepts credit cards for tuition payments due to increasing credit card processing costs. But some, like Austin Community College, are willing to fork out half a million dollars in fees each year since it’s more convenient for their students.

It’s important to note many of the schools that do accept credit cards have various restrictions in place. The most common restriction was that credit card tuition payments could only be paid online. Sixty-six percent of private schools and 87 percent of public schools surveyed have this restriction.

Other schools have narrower rules to keep costs down, such as only allowing part-time students use plastic or only letting graduate students or off-campus students pay with credit cards.

If you do plan to pay with a card, read the fine print for your school’s restrictions first.

“If you want to pay for tuition

with a card, know it’s riskier.”

If you’re tempted to pay for tuition with a credit card instead of a traditional student loan, make sure to carefully compare interest rates first. If you can’t pay off the credit card bill right away and will need to carry a balance, be prepared to pay that interest rate.

As of October 2014, the average rate for a low APR card was 11.58 percent APR, and the average for a cash back credit card is 14.79 percent APR. If you’re worried your lack of credit history will keep you from getting great rates like these, there are actually plenty of credit cards available for people with no credit.

With student loans, you will pay a much lower interest rate. According to the U.S. Department of Education, the interest rate on federal student loans ranges from 3.86 to 7.21 percent depending on the loan type.

With rates on loans so much lower than on credit cards, it may only be beneficial to pay with a credit card if you can avoid carrying a balance or only carrying it minimally.

Another thing to consider when deciding whether to pay tuition with a credit card or student loans is how much leniency and flexibility you will have.

Federal student loans, on the other hand, generally offer more flexibility. Several different repayment options are available, and you can switch options if your circumstances change.

There are several plans that may be available to you if you’re experiencing financial hardship (such as low or unstable income). Some lenders also will grant deferment periods that allow you to postpone payments if you’re going through hard times.

If you want to pay for tuition with a card but will be carrying a large balance, know that it’s riskier and less flexible than paying for school with student loans. Unless you’re able to pay back your credit card bill without accruing too much interest, it’d be best to just leave your cards in your wallet.

Since receiving Bachelor's degrees in Political Science and Psychology, Alexandra enjoys studying socioeconomic factors in business, behavior and politics. When she isn't gathering intel on the latest trends and experts in business and finance, you can find her at the gym, searching for gluten-free goodies on Pinterest or enjoying a night out with friends.