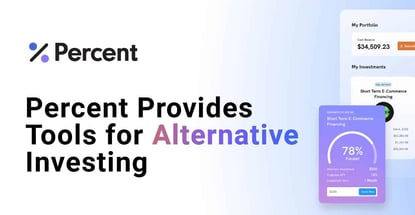 In a Nutshell: Private credit investments give investors opportunities to diversify their portfolios. This non-bank loan financing offers exposure into investments collateralized by loans made to small businesses and individuals, and though riskier, can yield higher APYs and shorter-terms than more traditional investments. If investors are interested in exploring the world of private credit investing, they can turn to Percent, which lets them invest in deals for as little as $500. The platform also gives its users tools to compare deals based on APY, duration, investment minimums, and other factors.

Private credit investment is a $7 trillion industry. But for many years, only those already connected to this world invest in this asset class that Percent describes as “privately negotiated loans and debt financing from non-bank lenders,” including “business and consumer loans, venture debt, and other forms of private debt.”

Investors find private credit investments appealing for several reasons. For one, the average maturity of a deal is typically shorter, but some refinanced deals could turn the principal and interest around in only a month.

What’s more, while these types of investments are riskier than bank investments, they also have higher interest rates, meaning that they could be more lucrative if successful.

Finally, private credit investments can diversify investors’ portfolios since they aren’t as susceptible to changes in the stock market as are other types of investments.

Percent CEO and Founder Nelson Chu started his career off in traditional finance but saw the benefits of helping the average person boost their alternative investment portfolio.

“Alternative investments were coming to the forefront in 2017 but many of the platforms had high minimums, sometimes upwards of $25,000 or $30,000. As the first investment you make, I personally wouldn’t put that much money in a platform I’m not familiar with. The durations of these investments were also quite long, with some extending up to five years,” he said.

So Chu and his team decided they could create a platform that would bring shorter duration investments out to market with lower minimums.

Teaching Users How to Invest in Private Credit

How does investing on Percent work?

“You can invest in invoice factoring companies, litigation finance companies, and other businesses like these which makes it a fascinating asset class to participate in. A consumer or investor oftentimes interacts with private credit on a regular basis on their own when they take out a student loan or they buy something online using Buy Now, Pay Later. On the flip side, they can also invest in the underlying loans themselves to get returns on the other side as well,” Chu told us.

After opening a free account on Percent, an accredited investor would gain access to an opportunity to invest in, for instance, a Consumer Lender deal. Then, the user would decide if it was worth it to invest the $500 minimum in a seven-month-long deal with 9.9% APY.

The other product option is a blended note.

“For many investors, performing due diligence on every single offering is extremely tedious and time consuming, and they prefer a ‘set it and forget it’ type product. Blended notes are perfect for these types of investors where they can get a diversified basket of 10 to 15 borrowers by making just one investment,” Chu said.

“Investors have the opportunity to choose what type of exposure they want in this diversified basket as well. Do they want US-only, or one that has exposure to every borrower on the platform, or one that has only short duration offerings? It’s entirely up to them and what their investment preferences are.”

Since 2019, Percent has funded more than $700 million in loans, which reaped an average 14.95% weighted average APY for investors, as of September 30, 2022. The company’s default rate is also low, especially for the loan percentages, at 1.43% over the last three years.

Another differentiating factor for the Percent team has been the platform’s transparency. To ensure the assets in the investments offered on the platform are real, the company verifies the collateral.

In fact, the company leverages a third party to check for authenticity. In February 2022, Percent hired MTAG for enhanced due diligence processes, bringing an institutional-grade layer of oversight to its risk management framework and offering investors on its platform greater confidence and peace of mind. Percent and its partners have so far analyzed over 2.7 billion data points to provide these reports.

“We provide visibility into the underlying performance of the investment products that people invest into, which in this day and age should really be table stakes. For public equities, you invest in a stock and you’re able to see their overall company performance. Unfortunately this just isn’t something you normally see in private markets,” Chu told us.

“We’ve generated over 5,000 reports for investors on a daily, weekly, and monthly basis. It’s evolved into an entire segment of our business in order to ensure investors get the transparency they need and deserve when making these investments into what once was a very opaque asset class.”

For instance, an investor could search only for deals with an API range of 10 to 12% yield. Then, they could identify how much they’re willing to invest. Percent will share the deals that fit these parameters, and then the user can decide which deal is more appealing.

This also ensures that certain deals don’t get overfunded.

“As the deal comes together and it reaches the upper limit of $3 million that a borrower wanted to raise, it becomes oversubscribed and at that point we have tools that can algorithmically allocate to investors based upon the specific criteria they set for themselves. From the total investment amount to the target APY to the minimum they want in the deal, all of that gets considered as part of the automated and intelligent allocation process,” Chu told us.

Another benefit for accredited investors is the increased liquidity they have with short-term deals. The shortest duration product offered on Percent is about a month, while the longest is about three years.

“You can decide to invest how you see fit and optimize for what matters most to you, whether it’s duration, yield, or structure. Whatever their investment objectives are, there is something for them on Percent,” Chu said.

As part of onboarding, any accredited investor who signs up for Percent goes through a process that explains how to make their first investment and understand what they’re investing in.

Chu suggests that first-time users oftentimes only invest $500 in a single deal so they can better understand how the process works.

“We’ve always found based on our internal data that investors oftentimes like to test the platform out and then see how it goes. Because the duration is so short, the $500 they initially put in should come back, and through that process they can learn how the platform works and how deals perform along the way,” he said.