Money Under 30: How David Weliver Paid $80K in Debt in 3 Years & Documented It as a Resource for Young Adults 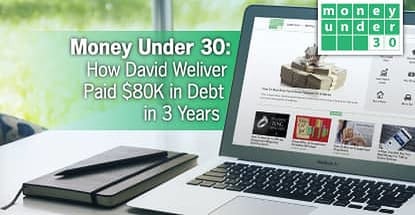 In a Nutshell: David Weliver paid off $80,000 in combined student loan and credit card debt in just three years by committing to increasing his income and decreasing expenditures. During his journey to overcome substantial debt, he began blogging about his accomplishments and MoneyUnder30.com was established as a resource for young adults in similar situations. Today it is a leading personal finance website that provides approachable, nonjudgmental financial advice to 500,000+ monthly readers. //

Many young adults have been known to abuse credit cards. It’s easy to do when you’re new to credit and don’t fully understand how interest works, nor comprehend the responsibility involved. The typical scenario for someone in their early 20s consists of school or starting off in their respective career with a new line of credit and an “I’ll have the money to pay this back later” mindset.

This was especially true before the Credit Card Act of 2009, when banks heavily marketed to students on campuses and were giving away credit cards like candy on Halloween. Just about anyone 18 or older could get a card and begin charging away – which is exactly what happened to David Weliver, who by the age of 25 had $80,000 in combined student loan and credit card debt.

David’s story is unique in that instead of accepting being a slave to his debts – or worse, filing for bankruptcy – he not only paid his debts by age 30, but turned his financial struggles into a lucrative business that helps young adults get out of the same situation he was once in. 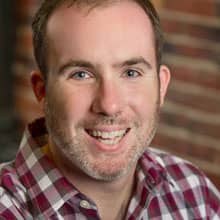 His story began in 2003, living in New York City fresh out of college with sizable student loan debt, pursuing his new career as a writer.

“I was living in the city after school and spending way more than I was earning, so I racked up all this credit card debt, too. Like most people experience with debt, at first it doesn’t seem so bad, but then you add a little bit each year and in a few short years you’re overwhelmed,” David told us.

By the time he was 25, his cards were maxed out.

“It was really stressing me out and taking a toll on my health, and that’s when I decided to buckle down,” he recalled.

“I was a researcher and I wrote a few articles where I’d be researching things like 401(k)s and all types of personal finance topics, yet making terrible mistakes with my own money,” he confessed.

David’s aha moment didn’t come until after he left his job with SmartMoney magazine, but that’s when he began devising a plan to get out of debt – with a goal to be debt-free by his 30th birthday.

“I wish I had a good story, like I had spent two years traveling the globe, paid for a loved-one’s life-saving operation, or lost it all in a card game. Alas, I had simply spent my way through early adulthood, ignoring the cardinal rule of personal finance: Don’t spend what you don’t have.” – David on MoneyUnder30.com

“I tried for years to cut spending, like all the financial advice tells you to – stop getting coffee, pack your own lunch – and some months I would do okay, and other months I wouldn’t. But the problem was it would only save me, if I did really well, $200 or $300 a month. But looking at $80,000 in debt, that’s not enough,” he said.

How to Acheive that Goal: Increase Income & Decrease Expenses

David began to analyze his options as to what would really help him achieve his goal, and the two obvious solutions were to decrease his expenses and increase his income.

His first and largest expense, rent, was decreased by $500 when he moved into an 8’x10′ room with three roommates. David admits it wasn’t the greatest living situation, but he was young and single so it could be done.

The next thing he did was take on a second job as a barista at Starbucks, as well as some other odd jobs here and there.

“Between Starbucks and the other jobs I did, I was able to put all of the earnings towards my debt. I worked my butt off at work too, and got a couple of promotions and negotiated for raises. So over those three years I cut my living expenses, I increased my income substantially and by keeping my expenses low, I was able to put all of that extra income towards those debts,” he explained.

Money Under 30: Financial Lessons Taught by His Experience

While working to achieve his goal, David became frustrated with the lack of resources available to young people in his situation.

“All of the magazines and websites out there at the time were focused on people who already had assets. They were for people in retirement or close to retirement because that’s really who the financial advertisers and big banks wanted to target – people with money already,” he explained. “I was a little frustrated with my experience and so I thought, ‘Well what if I just write about my experience with money and things that are relevant to my age group?’”

Like most new blogs, it took time to garner some traction. About a year into his blogging he realized there was interest in the topic and he gradually began to invest more time into the site.

In due time he saw the potential for it to be an actual business and began selling advertising and building partnerships, and the rest is history.

What was once a solo blogger’s journey to become debt free is now a leading personal finance website dedicated to teaching 20-somethings the ins-and-outs of money.

Money Under 30 covers credit cards, banking, mortgages, student loans, investing and insurance topics written by “real people who have been there,” and is named one of Kiplinger’s “10 Top Money and Finance Blogs You Should Read.”

Besides the wealth of free information and resources on MoneyUnder30.com, another way the site can help you is through MoneySchool, its free 7-day email course.

Free MoneySchool Will Help Clean Up Your Finances with Actionable Items

MoneySchool is a set of seven emails, one delivered each day over the course of a week, with an actionable item in each. David told us the actions were designed to be completed quickly so you can achieve financial victories soon.

“Each step is something that can be done within 15 minutes. It’s not going to solve your financial problems in a week, but it’s designed to get you thinking about it and get you a quick win or two to say ‘Hey this isn’t as hard as I thought.’”

According to the site, subscribers to the course will learn how to:

To date, 18,000 people have signed up and benefited from the simple practices outlined in MoneySchool.

“Big fan. I’ve read every article for the last week and I’ve 1) moved my savings to a high yield account 2) starting planning for which expenses to use credit for to earn pts 3) opened an investment account and have allotted a small amount a month to add to it 4) started figuring out how to pay my debts and be smarter about my monthly spending… and I’ve just generally become very interested in personal finance overall.”  – Alexa B, MoneySchool Testimonial

All it takes is your email address to get instant access to the course.

David’s #1 Takeaway: Paying Off Debt is a Marathon, Not a Race

For David, facing the reality of it all was the first step towards fixing his financial situation.

“Most people when they’re in debt put their head in the sand. I certainly was guilty of it. I knew I owed a lot but refused to look at the bottom line. I had to get all of the statements together and put it in a spreadsheet and get that list together to see the interest rates and monthly payments, and go from there,“ he admitted.

Luckily there are plenty of personal finance apps and software available today that can automate that process for you now.

“The thing about debt that can be so frustrating is that unless you win the lottery, it’s not going to be solved overnight – it’s going to take many years,” David stressed. 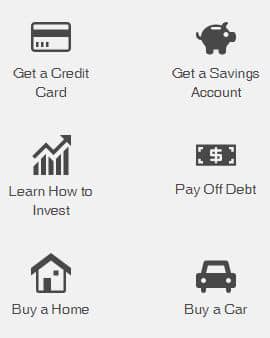 Some of the topics covered on Money Under 30

While Money Under 30 was designed on the premise of helping young adults, there’s information on the site and in the free 7-day course that’s applicable to all ages. If you’re looking to overcome debt, purchase your first or fifth home, refinance student loans or switch insurance companies, there’s knowledge on MoneyUnder30.com that can help you make these complicated financial decisions.

Not everyone can pay off $80,000 in 36 months while at the same time turning that obstacle into a profitable business – but David proved that it can be done, and without his story, the online destination that helps over 500,000 people manage their finances each month wouldn’t exist.