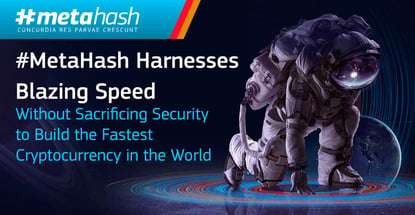 For all the promise that blockchain technology holds for the future of global business, there are still two very prominent issues that developers need to tackle to bring larger enterprises on board: speed and security.

And while most blockchains offer tremendous security features, the potential rise of Quantum computing and other advanced infiltration methods could make information that is currently secure vulnerable to future attacks — and much sooner than some organizations anticipate.

It was with these two important hurdles in mind that #MetaHash set out to build the world’s fastest and most-secure cryptocurrency. And, based on recent tests, the Swiss-based organization may be close to realizing its goal.

#MetaHash is a blockchain 4.0 platform that was created for storing and sharing assets and creating or using decentralized apps and services. The technology’s key feature is its own blockchain protocol called #TraceChain.

The chain features an automatic self-learning algorithm for routing signals over the network. Starting at a rate of 50,000 transactions per second (the capability of a 100-megabit channel), it grows as more nodes with higher bandwidth join the network, forming its core and improving the reliability of additional data chains.

“Thanks to its unique approach in synchronizing the data, we can reach more than 50,000 TPS (transactions per second) with less than three seconds for validation,” said Andrey Akimov, Chief Communication Officer at #MetaHash. “This kind of speed means faster operations for any client service, which has not been yet possible as the low speed of blockchains is a well-known problem in the industry.”

Akimov added that many enterprises that want to decentralize their businesses are turning to the #MetaHash platform. That’s because the accelerated validation speed means transactions that once took hours to complete can now be done in a matter of seconds.

“Also, for the end-users of our platform, it is a kind of a new internet with decentralized applications and services that are as fast and smooth as people are used to, but much more secure due to the blockchain’s advantages,” Akimov said.

The #MetaHash network uses nodes operated by the organization’s growing community. And instead of basing its #MHC block growth on mining — which tends to reward the users who have the most expensive equipment — #MetaHash relies on forging — a reward system for those who support the consensus.

Through forging, #MetaHashCoin owners collectively receive 50% of all rewards. Node owners receive 40% and active users of the #MetaGate browser and #MetaWallet receive the remaining 10%.

Since #MetaHash can support more than 50,000 transactions per second with a three-second validation rate, it’s no surprise that developers from around the globe are flocking to build decentralized applications and independent sub-chains on the network.

The #MetaHash team relies on its own developers, who have an extensive background in both security and speed, to meet the network’s growing demand.

“Our team is built of people from various parts of the world — from North America to Asia,” Akimov said. “The number of people varies from time to time as we may need more resources for this or that task or part of work. Also, the degree of involvement may vary significantly.”

In its present state, approximately 150 people actively work on the project, with a collective goal to build a self-sustained ecosystem that is invulnerable to outside attacks yet comfortable for everyday use.

By creating flexibility in platform and medium, #MetaHash hopes to attract large enterprises that may be hesitant to place data or digital assets on the blockchain.

“We are lucky enough to work in one of the most promising industries that may significantly change the world we live in,” Akimov said. “But we are twice as lucky to work on a project that has one of the most effective technologies in blockchain nowadays.”

Thousands of Users Across Hundreds of Active Servers

The #MetaHash community consists of many diverse users and developers who each have their own goals for the blockchain. As the technology grows, the organization plans to expand its current negotiations with several enterprises that have an interest in using the technology for their businesses.

“Our network is now passing its way to full decentralization which will take up to several more months,” Akimov said. “It means that our community, and consequently the network itself, is constantly growing. We now have thousands of active users and hundreds of servers established by our community and are actively welcoming more people to join #MetaHash.”

The #MetaHash blockchain is faster than Bitcoin, Ethereum, and EOS systems.

Part of the community’s draw is its equal distribution of rewards through forging, which very few cryptocurrencies currently support. As new developers enter the community, #MetaHash continues to expand its use cases to support their various needs.

“We have a number of tools which will make the creation of decentralized applications much easier,” Akimov said. “Our #MetaApps tool can process almost any programming language and can work with other blockchains as well. In our #MetaGate browser, you can already see a number of applications created by our community.”

The organization also claims it’s seeing a large number of applications moving over to the #MetaHash blockchain from other chains. Any digital asset in another blockchain network (think ETH, ERC20, or Bitcoin) can be converted to #MetaHashCoins. That’s because #MetaHash supports the concept of blockchain interoperability by assuming the future of the internet lies in the ability of independent networks to interact and integrate with one another.

Far too often, developers use old technology to create new solutions. These innovations often seem viable long-term but soon falter because their foundations are already dated. That isn’t the case with #MetaHash, which completely reimagined blockchain technology by overcoming the speed and security issues that most decentralized applications face.

That’s why today’s news often features updates on existing blockchains falling to 51% attacks. These attacks often happen because of low thresholds that amount to slightly more than a 50% hash rate. Attackers who take over networks can perform a double spend — along with many other malicious functions — and essentially leave the blockchain inoperable.

With #MultiPOS, #MetaHash eliminates many of the issues that make other blockchains susceptible to attacks. This multi-layered consensus system enhances the network resilience from 51% attack up to 90%.

That’s just one of the many features the #MetaHash team continues to perfect in its quest to build a new internet, where speed, reliability, and security are no longer concerns in the blockchain community.

“We see #MetaHash as an ecosystem based on our technology, which will be self-sustained, invulnerable to any outside pressure, and comfortable for everyday use,” Akimov said. “We envision our strong community managing the further evolution of #MetaHash. The network will be full of decentralized apps and services on the one hand, and the top blockchain solution for enterprises and developers on the other.”