Genesis Mining Lets Anyone Mine Cryptocurrency Without Costly Hardware 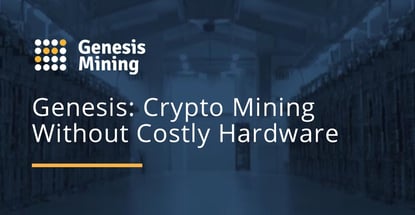 In a Nutshell: Genesis Mining is a platform that provides remote cryptocurrency mining to customers who don’t want to run their own mining operations. You can choose from several different plans and begin mining within minutes without the purchase of any hardware. The company runs multiple crypto farms across the globe, making it a leader in the crypto mining industry. Genesis is introducing its new Hexa system to support entrepreneurs who want to set up their own farms quickly and painlessly.

The cryptocurrency revolution has attracted many adherents, due to features like anonymity, security, and the possibility of capital appreciation. While Bitcoin is the largest and most famous cryptocurrency, there are dozens of others with their own specific attributes.

Until now, folks who wanted to create (i.e., “mine”) their own cryptocurrency tokens had to invest in expensive equipment to turn a profit. Genesis Mining revolutionizes the mining business by offering a remote hash power service that requires no hardware investment.

“Nowadays, it’s really challenging to start mining Bitcoin by yourself,” said Philip Salter, Head of Operations at Genesis Mining. “Our mining-as-a-service division offers an opportunity for individuals to participate in Bitcoin mining in an easy way. We build and maintain huge data centers, and we give our customers access to them. Our data centers and the machines in them are mining coins for our customers.”

The complications of mining your own crypto tokens start with the most basic things, such as acquiring and setting up hardware designed specifically for mining. Other factors like the location, the electricity costs, and the necessary cooling are also important considerations.

To avoid these challenges, Genesis Mining’s service is an easy access point for mining cryptocurrencies. You participate in mining without having to build or maintain anything. The goal is to make coin mining accessible to everyone.

Genesis Mining provides hash power to more than 2 million people worldwide. Hash power refers to the ability to solve, or hash, specific algorithms to achieve a stated goal. These algorithms mine new cryptocurrency tokens and support transactions on a decentralized blockchain database. Customers pay to rent hash power from Genesis without investing thousands of dollars for the required mining rigs.

Since its inception in late 2013, Genesis Mining has expanded access to more than 100 countries to become the biggest provider of hash power. Genesis offers about a dozen mineable cryptocurrencies through six major algorithms residing on multiple clouds and has conducted more than 100 million transactions to date.

“Everyone is encouraged to start using our service,” said Salter. “Especially if they are interested in crypto and like the idea of being a miner who supports the ecosystem — because that’s what miners do — and don’t mind getting rewarded for it too. Our services are available worldwide.”

Genesis Mining acquired 2 million customers in just four years. The first years were a true kickstart, in part due to the Bitcoin phenomenon. The coin resulted in a gold rush due to the surprising hype surrounding the $20,000 price tag on the currency. Genesis grew exponentially in just a few years, but that huge spike in interest was much greater than anticipated.

“It was great,” recalled Salter. “But demand definitely went back to normal levels afterward. We are expecting the market to go into hype-mode again soon. In the past three years, we have done everything to prepare ourselves, and we’re looking forward to it!”

The Benefits of Mining Cryptocurrencies on Genesis Continues to Drive Demand

Genesis fulfills the vital mining function required by the crypto ecosystem. There is no Bitcoin without mining. Miners are responsible for running the network, for bookkeeping, and for securing transactions. Miners can’t interfere with any of the bookkeeping and are rewarded for their efforts.

Philip Salter is the Head of Operations at Genesis Mining.

“It’s an ecosystem that is running pretty much automatically and everyone is benefitting from it,” said Salter. “Miners donate their computing power for the network, and for that, they get rewarded in Bitcoins. Of course, miners have expenses — buying the machines, plus hosting and maintaining them — so it is best to mine when the Bitcoin rewards not only make up for your costs, but also account for some extra income.”

Genesis Mining obviates the need to run your own mining rig. To begin mining cryptocurrencies on Genesis, customers simply open an account and pick a mining plan type.

Genesis collects only the minimum regulatory-mandated data needed to open an account, thereby helping ensure your security and privacy. There are three defined account packages with hash rates ranging from 4 trillion to 104 trillion hashes per second (TH/s). You can also create your own custom plan to meet your specific needs. After buying your plan, you simply connect to manage your mining and execute your coin transactions. All Bitcoin plans use an SHA-256 mining algorithm.

Genesis Mining has captured a leading position in the cryptocurrency market for several reasons. First, it features the fastest mining rigs in the business, running in data centers distributed throughout the world. Customers can choose from among six algorithms that span 10+ cryptocurrencies. Once you start mining, your outputs get automatically sent to your designated crypto wallet.

Genesis customers have complete freedom to allocate their hash power to multiple currencies within their chosen algorithm. The intuitive dashboard allows customers to monitor all mining data and charts at a glance.

Hexa is Genesis Mining’s enterprise-grade mining management solution. Hexa represents the summation of everything Genesis has learned during its six years of operation. With it, entrepreneurs can build and run huge mining farms using any type of hardware and firmware. You can use Hexa to quickly deploy your mining operation while supporting advanced reporting and easy monitoring.

Hexa makes data center configuration painless by automatically detecting and adding all machines to the system. You can configure every element down to the fan speed of the cooling system, and you can assign miners to the most appropriate physical locations to minimize costs and maximize efficiency.

The monitoring capabilities of the Hexa system are revolutionary. You can see all operational data in real time at both the summary level and by the individual miner. Heat maps are available to quickly identify problems, and the system generates smart notifications whenever something goes wrong. Most importantly, the monitoring system allows you to plan out and tweak your maintenance processes.

Reporting on Hexa uses a proprietary Block Explorer to gather all information about the size and location of your current mining rewards. You can easily track the distribution of your operational and capital costs throughout the system. This allows you to adjust your farm run to minimize operational costs.

Hexa has employee management tools such as downtime tracking and shift reports. By capturing and saving all events, your crypto farms are as transparent as the blockchain.

“We also have some more cutting-edge tech projects cooking,” said Salter. “Very soon we will be able to share more. Bitcoin is not going anywhere, and it’s only a question of time when it will make it to the news big time again. You might as well join the financial revolution now.”

10 Unsecured Credit Cards for After Bankruptcy