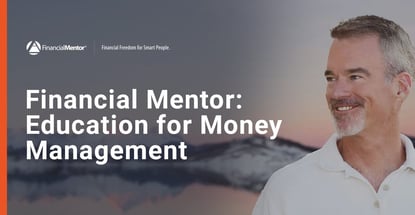 In a Nutshell: Financial Mentor is a financial education resource developed from Todd Tresidder’s lifetime of experience working in the industry and as a money coach. He created a unique approach to wealth building rooted in the mathematics behind investing. The process also acknowledges the personal and emotional sides of investing, especially when paying off debt. Financial Mentor’s materials, particularly its wealth-planning course, educate consumers on fact-based financial planning that will help them invest intelligently and build their financial futures.

Todd Tresidder scrimped and saved as he worked his way through college. He cooked meals for his fraternity house to pay his bills. He even went an entire quarter on a $100 budget — and had money left over at the end.

Tresidder came to realize that, whether he liked it or not, finances were a part of life, and we all have to deal with them. So if he was going to lead a financial life anyway, why not aim for a strong one with practices that lead to wealth?

So, Tresidder started reading books on wealth building and planning, and he developed frameworks for how to apply the approaches in his own life. After finishing college, and a brief stint at Hewlett Packard, Tresidder went to work with a fledgling hedge fund. He spent 12 years there doing quantitative research into investments and ultimately became a partner.

In 1997, Tresidder and his partner sold the hedge fund, but his interest in finance persisted. His conversations with friends and casual acquaintances were often about the topic. And he quickly identified a problem with the financial advice and education given to consumers.

Tresidder founded Financial Mentor as a coaching business to test his hypothesis. His premise was to separate financial advice and instruction from investment and product sales. He has been in business for more than two decades because his approach was so successful.

“Popular media isn’t exactly driven by financial experts. It’s driven by young writers who are affordable enough for these companies to build their content, marketing-wise,” Tresidder said. “There weren’t any genuine financial experts that shared the type of information I had developed over my years trying to figure this out. So I thought, ‘What if I could actually help people?’ And so the quickest path is a service business.”

Eventually, the demand outstripped Tresidder’s schedule, so he decided to expand access to his resources. Today, Tresidder makes the insight and education he provides as a financial coach available through Financial Mentor’s courses and books. That gives every consumer access to Tresidder’s tested and proven approach to building wealth.

“The centerpiece of my belief was simple,” Tresidder said. “I was young, and I understood the math of compound returns. My objective was to become a great investor, so I needed to master investing.”

A compound return represents the cumulative amount of reinvested capital that generates its own returns.

As Tresidder developed digital trading systems for his hedge fund, the numbers told a different story. Contrary to the accepted wisdom, the higher a return stream’s volatility, the less money it makes over time.

“I kept looking at the long-term returns, and the less volatility in the return, the more money the model made,” Tresidder said. “Once you introduce risk management, you introduce the investment process, then suddenly, the whole equation turns on its head. You’re in a whole different world where the less you risk, the more you make.”

Approach Debt as a Means of Personal Fulfillment

Debt is another area of personal finance where Tresidder departs from other financial educators and advisors. The dominant opinion is that debt is bad, and the sooner consumers can pay it off, the better off they will be. But Tresidder’s experience says otherwise.

“The way I teach it is there’s no right answer,” Tresidder said. “It all has to do with the emotional makeup of the person.”

Some people, including Tresidder, don’t like carrying debt, and he describes it as “the antithesis of freedom.” Consumers with low or no debt tolerance may make financially counterintuitive choices to avoid exposure to debt. Those decisions are not geared toward maximizing wealth but maximizing life fulfillment.

Someone with that mindset who’s already carrying debt may want to pay it down as quickly as possible and regain financial independence. But another personality type may opt against paying debt down in favor of investing.

“There are people who find paying off debt so entirely unrewarding that they’re not happy unless they’re moving forward by building an investment account,” Tresidder said. “Those people are better off pursuing investments first and paying off debt later.”

That type of consumer will experience more positive reinforcement from building a portfolio and earning returns. Then, they can put those returns toward paying down debt. Consumers are often more likely to build wealth and achieve financial independence by turning conventional financial wisdom on its head than following a prescribed approach.

“Each individual’s path is going to be unique depending on their skills, resources, abilities, emotional makeup, and risk tolerance,” Tresidder said. “It has to be unique to each person.”

Credit card debt is one of the most prevalent types of debt, and it often proves the most hindering. Credit cards typically have much higher interest rates than loans, making them harder to pay off. And the debt becomes more costly the longer consumers carry a balance.

But credit cards also offer rewards that can benefit consumers who use their credit cards wisely and manage them diligently. Some consumers try to game the system by taking advantage of rewards, introductory offers, and other perks. But Tresidder advises against that approach.

“Don’t play card hopping or card roulette or whatever the latest term is,” Tresidder said. “The distraction and the time required to card hack is greater than the value proposition.”

Instead, Tresidder recommends putting that time, effort, and creativity into an offensive strategy that produces revenue. But he doesn’t discount the value of rewards when used efficiently and intelligently.

The crux of his advice is that consumers should use the card to only charge for purchases they can afford to pay with cash. And they should pay the balance off in full. That will protect their credit score, earn them rewards, and limit what they pay in interest.

“If you’re going to spend money, you may as well spend it on a card and get the reward that is most valuable to you,” Tresidder said.

When Tresidder began studying finance, he said he focused on wealth planning. His entire approach to personal finance centers on that pursuit. It’s the same goal he has helped clients pursue, and it’s the centerpiece of Financial Mentor’s educational resources and materials. The capstone to Tresidder’s research and career is Financial Mentor’s wealth planning course.

“It’s my 20 years of coaching embodied into a single course,” Tresidder said. “And it’s better than my coaching ever was.”

Similar to Tresidder’s advice on investing and debt, it diverges from commonly held and heard financial advice. However, it isn’t just Tresidder’s opinion. He bases it on mathematical facts that he knows well.

Tresidder said consumers could complete the course in as little as a month if they treat it as a full-time job. Most people spend about three months working through the material. It covers general wealth building, asset classes and how they fit together, implementing a wealth plan, and how to overcome obstacles that may emerge.

In addition to the course itself, students receive access to the Financial Mentor community through the private course forum, and they also have direct access to Tresidder himself. They can ask questions, share ideas, and benefit from active engagement with other learners and their teachers rather than being left on their own.

“They’re active students, learning about the keys,” Tresidder said. “Once they finish the course, they know the subject inside out, and they know that is the final word on the subject.”