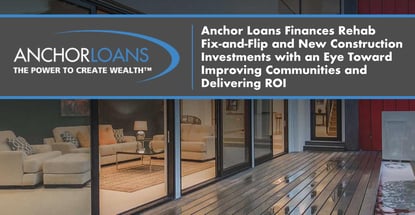 In a Nutshell: Fix-and-flip projects can be profitable investment tactics in the world of real estate. And Anchor Loans helps fund these investments with its fix-and-flip and new construction lending services. The company serves a range of borrowers, from novices taking on their first project to high-volume flippers who purchase 50 properties per month. Anchor Loans’ primary clients work on new construction projects, which oftentimes means they raze an old home to build a new, improved one on the property and add positive value to the community. Through the Anchor Fund, investors can contribute to Anchor Loans’ capital and potentially earn healthy returns on their investments.

Back in 1998, a handful of friends were pooling their money together to finance fix-and-flip loans with the help of third-party brokers who would connect the lenders to the borrowers.

“We realized that being one step removed from the borrowers made our money a little bit riskier,” said Steve Pollack, CEO, President and Co-Founder of Anchor Loans. “The brokers wanted to get the deal done. They didn’t really care about the quality of the deal because they got paid once the deal was done.”

Pollack said that, as he and his colleagues learned more about the fix-and-flip space at the time, they realized a good opportunity existed for them to create their own company that would allow them to be more in control of the whole process.

And with $8 million of their personal funds, along with money from some of their friends and family, they launched Anchor Loans. The company quickly grew through word of mouth and referrals until it reached its highest point in 2005 when it originated $172 million worth of loans in that year.

“We realized that the real estate market was starting to become a little bit overheated and we actually downsized in 2006 because we were concerned about the market,” Pollack said. “I’m not going to sit here and tell you we were smart enough to understand the reasons or that we predicted the subprime crisis. But we did see some signs there.”

The Anchor Loans team heeded the signs and downsized once again in 2007. That’s why, when the subprime market did come tumbling down in late 2007, Anchor Loans was able to weather the storm and break even where other companies were forced to shutter their doors.

By 2010, the company was positioned to ramp up its pace, and it did so in an explosive manner, Pollack said, taking on new partners and new capital sources.

Pollack explained that fix-and-flip refers to the process of a borrower purchasing a property or properties, improving upon them in some significant way that adds value. For example, a borrower can build an addition to a home or bring a dilapidated house into like-new condition. In the end, the fixer will become the flipper as they sell their property for a profit.

“Anchor Loans has become the nation’s leading hard money lender by providing real estate investors with quick, dependable and flexible financing options for their fix-and-flip property investments,” according to the company. 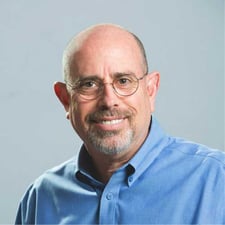 Steve Pollack is the CEO, President, and a Co-Founder at Anchor Loans.

And you don’t have to be a real-estate mogul to take advantage of Anchor Loans’ services. Pollack said the company classifies borrowers into four tiers: elite, professional, success, and entry.

“The entry-level tier is people who are either just getting started — they’re going to have a few deals — or in some cases, may not have done a deal at all,” he said. “As long as they can show us that they have enough cash reserves, are creditworthy, and are buying a good deal, then we’ll be happy to finance them and help them be successful in their business.”

On the other end of the spectrum, Pollack said Anchor Loans works with people who may be purchasing 50 properties per month.

“Fix-and-flip loans can fund the purchase and renovation of residential investment properties,” according to the company website. “They’re typically short-term and offer quick closing on non-owner occupied properties in any condition. Anchor Loans can quickly fund your next fix-and-flip project with ease and reliability.”

Anchor Loans currently finances the acquisition or the refinance of fix-and-flip properties in 46 states and Washington, D.C.

The majority of Anchor Loans’ business comes in the form of new construction projects, Pollack said.

“And when we say we do new construction, what we’re talking about is technically called infill construction, meaning we’re financing the acquisition or refinancing of an individual property in which a borrower is going to build a new house.”

He said that oftentimes there will be an existing structure on the property that the borrower will tear down and build a new house in its place.

“We don’t do the 326-lot subdivision type of construction projects for major builders. That’s not who we are,” Pollack said. “We’ll do the infill, meaning it’s filling in an existing community, not building out of a community.”

This approach aligns with Anchor Loans’ philosophy of making positive contributions to the communities in which its borrowers are taking on projects.

“We try to brand ourselves and try to perform at a level that is additive to our client,” Pollack said. “Our mission statement is that we, at Anchor, try to help create success by improving homes and communities.”

Pollack said it’s a priority for Anchor Loans to be a positive part of the borrower’s team.

“A partner in a sense,” he said. “We help them in many different ways. We might help our clients in terms of validating their properties. We might help them in understanding if their rehab project is appropriate. One thing we’re proud of is when we can tell a borrower, ‘Hey, you can do a loan on that property and be safe, but you’re not going to make any money.’”

This gives the borrower the opportunity to re-negotiate or back out of the deal in favor of a more profitable project.

Not only does Anchor Loans’ approach often translate to positive contributions to communities, but its close partnership with clients also leads to repeat business.

“At Anchor, your success is our success,” according to the company. “Over 85% of our borrowers are repeat customers who rely on our fast, dependable funding to grow their business.”

Fix-and-flip borrowers stand to make a profit after securing financing from Anchor Loans, but the company also provides earning opportunities for backend investors as well as through its Anchor Fund.

“Since 2003, Anchor Fund has operated as a mortgage pool, investing directly in trust deeds and earning income from the interest paid by our fix-and-flip clients,” according to the company. “Anchor Fund investors have benefited from the prudent loan analysis and underwriting practices that have made Anchor Loans, LP and its predecessor profitable every year since its founding in 1998 (…).

The company boasts the highest yield opportunities on the market, according to the website, with the company’s primary goal being to ensure investors receive the most out of their investments, with share value updated daily.

And Anchor Loans takes care of the behind-the-scenes legwork, so investors don’t have to.

“We service your loan so you can focus on your earning,” according to the company. “We collect payments, distribute funds, provide monthly statements, and more.”

Since 2010, the fund has generated a net average yield of 9.28% to its top-tier investors, according to the website.

And, as far as future economic downturns, Pollack said history tells us that it will happen eventually. But Anchor Loans has many predictability tools at its disposal that have never before been available, thanks to advanced computer technology.

Based on its track record during the previous housing crisis and its philosophy to be a positive force for borrowers and communities, Anchor Loans has proven itself to be a dependable private lender for fix-and-flippers across the country.