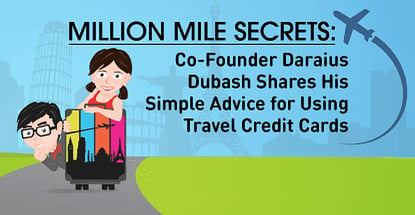 We’ve all heard the stories of people who’ve gone on exotic trips around the world for little to no money thanks to their credit card rewards points. And for a lot of people, that story is often followed up with a personal thought somewhere along the lines of, Yeah, right.

Even Daraius Dubash, the man behind Million Mile Secrets, was skeptical of the idea at first — but soon learned of its legitimacy.

Million Mile Secrets is a website he co-founded in 2011 with his former wife Emily Jablon that is dedicated to teaching cardholders how they, too, can take their own trip (or trips) using credit card rewards and little money. 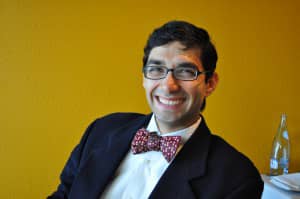 Daraius previously worked for a Fortune 500 Company with offices located around the world, which required a lot of travel on his part. Running out of his frequent flier miles after he left that job is what led to his eventual hobby-turned-career.

“I was collecting frequent flier miles and using them for travel, but then I quit and went back to business school. I ran out of my miles pretty soon, so I started Googling things like “travel for less” or “travel for cheap” when I stumbled upon other folks who were using frequent flier miles from their credit cards for travel,” Daraius explained.

“And that’s how I stumbled upon the hobby; it was just out of necessity. I of course was skeptical at first, but the more I did it, it really did work,” he said.

Daraius said his first recommendation for anyone wanting to tap into this resource would be to not carry a balance on the cards.

“You shouldn’t be doing this if you’re going to be carrying a balance on any of the rewards cards because rewards cards usually have a higher interest rate than most other credit cards,” he explained. “You’re never going to get ahead paying those high interest rates – so if you carry a balance, this is definitely not for you.”

His next piece of advice is one to help beginners get motivated.

“Start off with a goal: maybe a trip to Paris, a trip to Hawaii, a trip to Florida to see your mom. Just have a goal in mind no matter where it is. Once you have a goal it’s easier to figure out which cards to apply for to get the points,” he said.

This way, you can keep in mind the miles necessary to achieve that goal, and seek out cards with generous sign-up bonuses in-line with your goal.

2. It Takes Persistence, but Anyone Can Do It

Daraius warned that it’s not as easy as it looks, but assured that anyone with persistence can do it.

“It takes a bit of organization to use these air miles. Airlines will usually make it hard to redeem the miles, so it takes a little bit of persistence; it’s not as simple as opening a credit card and taking a trip,” he cautioned.

“There’s some extra steps involved, but it’s not overly complex because a lot of folks ranging from college students to stay-at-home moms manage to redeem their miles, but it’s not something that’s entirely intuitive and easy,” he said.

Daraius currently holds “around 20” travel rewards credit cards, and said that he and Emily have visited over 30 countries for “virtually no money.”

Though he can’t choose just one favorite place that he’s traveled to, he recently returned from Bali and said he really enjoyed the “peace, tranquility, and the fresh food.”

There’s only so much you can cover in a single article about using and redeeming travel rewards points, but Million Mile Secrets can help reveal all of the secrets of “big travel for small money.”

“We named the blog Million Mile Secrets because we didn’t like that regular folks didn’t have access to the closely guarded secrets that make Big Travel with Small Money possible.” — MillionMileSecrets.com

To learn more, visit MillionMileSecrets.com where you’ll find Daraius and Emily’s tips for how to “fly for much less, stay in wonderful hotels for much less, and rent cards for much less than retail price,” — all with credit card rewards points.