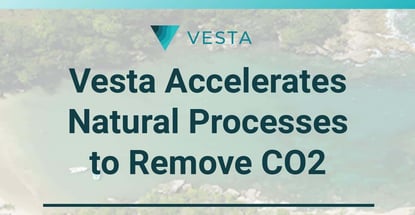 In a Nutshell: Oceans have become increasingly acidic due to rising levels of human-created carbon dioxide (CO2). Vesta uses carbon-removing sand in coastal ecosystems to naturally remove CO2 from the atmosphere. The process, which accelerates a natural process that would normally take millions of years to occur, is called accelerated rock weathering. Vesta relies in part on donations to continue its important work, and cardholders can cash in their rewards to support the organization.

The ocean has absorbed around 30% of the carbon dioxide (CO2) emitted into the atmosphere since the industrial revolution. And as humans produce more CO2 through deforestation and by burning fossil fuel, the ocean works overtime to keep up. It produces hydrogen ions that can have far-reaching implications on the ecosystems it supports.

“Because of human-driven increased levels of carbon dioxide in the atmosphere, there is more CO2 dissolving into the ocean. The ocean’s average pH is now around 8.1, which is basic (or alkaline), but as the ocean continues to absorb more CO2, the pH decreases and the ocean becomes more acidic,” according to the National Oceanic and Atmospheric Administration.

This increased concentration of hydrogen affects hard-shell animals, including oysters and coral, that have fewer carbonate atoms available. It can also negatively influence algae, seagrasses, and fish.

Kelly Erhart and her team wanted to find a way to reduce CO2 and acidity in oceans.

That search for a solution led Erhart, who has a background in biology, climate, and sustainability, to co-found Vesta in 2019. The organization adds a natural mineral, olivine — a carbon-removing mineral — to coastal areas. The process that occurs then permanently removes CO2 and reduces ocean acidity. Over the last three years, Vesta has been developing research that it will soon mobilize into Coastal Carbon Capture projects around the world.

“We came together around this question of what are the solutions that are the most under-invested in but stand a chance to make a really large impact on climate change?” said Erhart, who also serves as Vesta’s president. “It had been severely under-invested in and had been stalled in academia for about 30 years.”

Individuals interested in supporting Vesta’s mission can cash in their card loyalty rewards, points, or miles and donate that money to the organization. Major financial institutions, including American Express and Wells Fargo, allow members to donate their earnings to nonprofits.

If a financial institution doesn’t allow for direct transfer of rewards to Vesta or other causes, members can typically request their points to be transferred into cash back. Then, they can donate directly to Vesta through its website.

Governments have set goals of removing 10 to 18 billion tons of carbon dioxide from the atmosphere every year to reduce the impact of climate change. Vesta also has large-scale objectives for implementing a process that mimics natural coastal weathering.

Rock weathering occurs every time rocks come into contact with water, slowly causing carbon dioxide to leave the atmosphere and enter the water. Eventually, the carbon dioxide flows into the ocean, where marine organisms use it to build their skeletons and shells. When they die, those shells and skeletons are converted into limestone.

That process takes millions of years.

“With coastal carbon capture, we’re accelerating a critical part of that process, the process that drives the carbon capture, by taking olivine, an abundant natural mineral that’s found on every continent. It actually makes up 50% of the upper mantle. We grind it into the sand,” Erhart said.

Then, Erhart and her team take that sand to coastal areas where it dissolves with the help of wave energy, tidal forces, and ecological processes. Erhart and the team are able to harness the energy of the ocean to accelerate this process. When olivine is added to the coastal area, it generates alkalinity — which lowers the acidity of the ocean and removes carbon dioxide — in the form of bicarbonate.

Vesta partners in the fight against climate change with coastal communities that are experiencing sea level rise and erosion.

“We work with them in their existing adaptation efforts. There’s an industry of coastal nourishment or shoreline protection where foreign sand is brought in to replenish coastlines and keep vulnerable, critical coastal infrastructure afloat in the wake of climate-induced sea level rise and storm surges,” Erhart told us.

Committed to Research and Growing in Scope

Vesta plans to advance its commitment as far as possible, and its primary focus for the last three years has been lab research. The team wanted to develop a deep understanding of any ecological effects on marine organisms and perform modeling studies to understand how to measure carbon removal rates.

The team also developed a framework for community engagement and local social inclusion so the voices of local communities guide Vesta’s projects.

Vesta plans to start small and gradually increase in size , so the team can ensure rigorous science and monitor the effects. In summer 2022, the organization developed its first-ever field pilot sites, adding 500 cubic yards of olivine sand to shorelines in New York.

“In June and July, we deployed our first field pilots, which was really incredible. They were the first ever pilots or field demonstrations on site of any ocean alkalinity-enhancement solution,” Erhart said.

Now that they’re in the field, Vesta has plans to keep growing in scope and location. And there is more than enough olivine on Earth for the organization to make a significant impact. In fact, enough of the mineral exists to reverse the entire problem, so there’s no supply issue.

“The areas around our continents are called our continental shelf seas, and it would only take a quarter of a percent of them to remove a billion tons of carbon dioxide from the atmosphere. So, we can make a really outsized impact with small amounts of land area,” Erhart told us.

Vesta has a hybrid structure. Initially, it was sponsored by a nonprofit whose goal was to advance environmental solutions.

Over time, that model has shifted. The team grew to 13 full-time scientists and added a full-time, multidisciplinary team that understands scientific disciplines, engineering disciplines, and coastal dynamics.

“We operate a hybrid structure. We have relationship with a 501(c)(3) nonprofit very much like the fiscal sponsorship before. We also have a public benefit corporation, which is a legal structure that actually allows us to prioritize mission over profit,” Erhart said.

Vesta’s ultimate goal is to remove a gigaton of carbon dioxide from the atmosphere every year.

“That scale should be very cost-effective as well. It’s anywhere between $35 and $50 per ton of carbon removed, which would make it one of the most affordable carbon removal solutions that we’ve dreamed up today,” said Erhart.

So far, most of Vesta’s support has come from individual donors and foundations; in total, the organization has raised around $8 million in philanthropic funding. The organization also has had a significant number of small-scale donors who give between $1,000 and $10,000 through the website and award grants so Vesta can participate in research and project development.

“The majority of our research is funded through our nonprofit, because we are publishing the results of our first field trials to grow the field of coastal carbon capture and ensure that everyone understands the benefits and costs,” Erhart said.