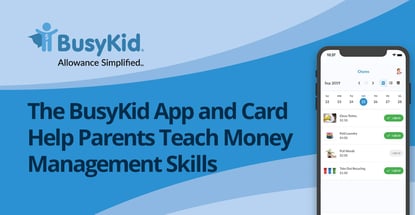 In a Nutshell: Today’s kids tend to experience money as plastic, not as physical cash, which makes it harder to teach them that money must be earned and managed for the future. The BusyKid app is fixing that. BusyKid lets parents assign chores to their children and compensate them every week as if they were receiving a paycheck, automatically allocating portions of the funds for saving, sharing, and spending. BusyKid, and the BusyKid debit card, are convenient ways for parents to teach their children to manage their money responsibly — and to motivate them to do the work necessary to earn it. With a recent update, the BusyKid interface is now more streamlined than ever.

Parents generally believe their children should be doing something around the house other than texting and playing video games, and that their allowance should be earned, saved, and spent wisely.

But helping kids understand the realities of financial competency is harder than ever these days. When you stop and think about it, you realize that more and more children never actually handle physical cash. They see their parents pulling out plastic and paying for things as if money were magic.

“The way I describe it is money is invisible. Kids don’t see money like they used to,” said Gregg Murset, BusyKid Co-Founder and CEO, who also happens to be a certified financial planner and a father of six.

“My clients always had a couple of things in common,” he said. “The first was that they worked really hard. And the second was that they managed their money really smartly. And so I thought, ‘Hmm — how do I get those two major things into my kids?'”

The BusyKid mobile app takes advantage of the technology parents and children use every day to help kids learn what it takes to manage their money responsibly and build the drive to work for it.

Far more than just a task list, BusyKid turns checking off chores and paying allowance into opening a child’s own savings account, making contributions to charities the child chooses, and even making real investments in the stock market. Kids control their own spending money as well.

Murset describes BusyKid as “your kid’s first job — with direct deposit.” Parents use the app to assign chores to their kids, and as the chores are completed, the children accrue allowance. Then, every Thursday, the parent receives a notification from BusyKid telling how much the child earned that week and asking whether to make payment.

“All you do is reply yes as a parent, and then — boom — the money is pulled from your linked bank account into our system,” Murset said. 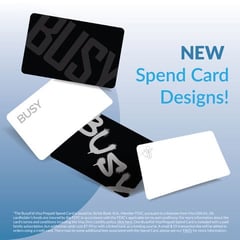 The BusyKid prepaid debit card is one the most popular features among children.

Friday is the child’s payday — that special moment all wage earners know, when the hard work of the previous pay period is rewarded, and it’s all worth it.

“That’s like Finance 101 — it’s what we do as adults,” Murset said. “We go to work, we earn some money, we save or invest some, and we share some with a church or charity or whatever we care about, and then we spend the rest. So the app mirrors your adult reality, for your child.”

And, when the child realizes how much spending money is left after obligations are met, it teaches an important lesson about the value of money and what it takes to earn it.

The way the app handles the spending portion for the child is also instructive. The money goes directly to the child’s BusyKid VISA® Prepaid Spend Debit Card — the BusyKid feature kids like the most.

“Of course, kids like to spend money,” Murset said. “But they love the fact that, with the card, they’re doing it the way their parents do.”

The BusyKid app costs $19.99 per year per family, Murset said. And this includes one BusyKid VISA Prepaid Spend Debit Card. Each additional card is $7.99 per year.

One of the most frequent questions Murset gets about BusyKid is how old a child needs to be to benefit from using it. Although it certainly depends on the child, he says, the appropriate age range for BusyKid is broader than you may think.

“We think it’s a good idea for kids as young as 5,” he said. “Five all the way up to 17 — that period of a little more than a decade you have as a parent to teach your kids two fundamental things — work ethic and how to manage their money.”

With younger children, BusyKid allocates 50% of allowances received for saving and investing, 10% for sharing, and 40% for spending. But as kids get older, the allocations change.

“The share stays constant, but the save and spend change over time to where they save a little less and spend a little more — because their needs are greater,” Murset said. Allocations are always customizable.

The investment function of the savings allocation is handled by BusyKid partner Stockpile.

“We had over $200,000 invested into stocks by kids in just the last eight months, which I think is amazing,” Murset said. “Our philosophy here is that kids learn best by doing. It’s not some video they watch, it’s not something they read to answer some questions, it’s not a test. They’re actually doing it.”

That goes for Murset’s children as well. One of his sons recently purchased stock in Ford Motor Co., while another purchased Disney stock. And, if you follow the markets these days, the Disney kid is, as Murset puts it, “rubbing it into the kid who bought the Ford stock.”

“And I think that’s a wonderful thing,” he said. “There’s nothing wrong with a little competition between brothers, right?”

Murset said the company is continually expanding the charities it supports through its give feature. He said the charities include large, well-known organizations as well as smaller, niche charities that are close to the hearts of BusyKid users.

Liam’s Lunches of Love is a recent addition to the BusyKid charity list.

“They literally make lunches and give them out to people in need every day,” Murset said. “It’s a great thing.”

Murset illustrates both concepts in what he calls his “loser dad scenario.” 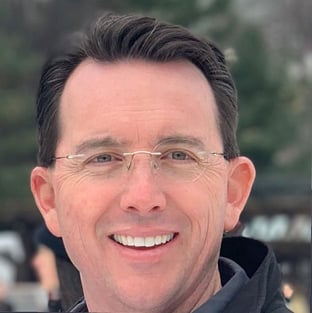 “And he knocks it out — does a good job. And he’s like, where’s my eight bucks?

Instead, Murset just taps a few buttons in BusyKid, and the bonus money arrives in the intrepid car washer’s account the next day.

Now the child, flush with electronic cash, faces the same dilemma most adults face each and every day — do I spend it now, or spend it later?

Consider the classic scenario of the cashless child who wants to buy something in a store — the BusyKid spend card can turn that possible confrontation into a teaching moment.

“Instead of the parent being the bad guy, or giving a big lecture, or the kid having a meltdown in the aisle, the parent can ask, ‘Do you have the money on your card?'” Murset said.

“You’re teaching them so many good things just by having that card and reinforcing the idea that invisible money is real.”

“You can literally go in and set up a recurring payment to kids every Friday or on the first and 15th of the month, kind of like you would as an employer with automatic direct deposit,” Mursett said. “It’s more of a set and forget it approach and not totally tied to chores. There’s a constituency of users out there that wants funds tied less to chores and to be more about letting their kids have some money to figure out money management.”