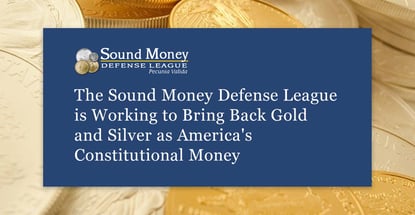 In a Nutshell: The Federal Reserve instituted a policy of unlimited quantitative easing in March 2020 in response to the COVID-19 pandemic, in effect injecting trillions of dollars into the economy. But some analysts believe the consequences of that action may not be limited to stimulus checks and paycheck protection. According to Stefan Gleason, Director of the Sound Money Defense League, the Fed’s pandemic response is only the most recent manifestation of a long-standing inflationary monetary policy enabled by unbacked fiat currency. That’s why Gleason and the Sound Money Defense League advocate for returning to a limited currency backed by gold and silver to preserve the value of money and reward savers.

In March 2020, people in the U.S. began to shelter in place in the wake of the COVID-19 pandemic, and economic activity slowed considerably. The Federal Reserve pledged to put as much new money into the economy as necessary by purchasing government debt and asset-backed securities on the open market.

With that, the Fed effectively created new dollars through the issuance of credit — a process sometimes known as printing money. The Fed’s post-COVID-19 policy of unlimited quantitative easing has made trillions in new dollars available to policymakers to help protect businesses and consumers.

That sounds like a good thing — until it isn’t, according to Stefan Gleason, Director of the Sound Money Defense League.

According to Gleason, the Fed’s recent moves differ from long-standing monetary policy only in scale, not in intent. Since the creation of the fiat currency system in 1913, U.S. dollars have leaked value as the size and scope of government has increased.

What’s needed to halt this chronic inflation, Gleason said, is a return to a monetary system in which circulating currency is limited and backed by gold and silver rather than by government fiat.

“The constitution set up a system where gold and silver was the money of our country,” Gleason said. “And as we’ve severed ties with gold, it’s enabled huge deficits and massive growth of government. Gold and silver are the antidotes to that.”

Working to Reform the Legal and Financial Status of Precious Metals

Gleason came to his role as an advocate for the gold standard after more than 15 years of involvement in free-market politics.

“Some of that is pertinent to precious metals,” he said. “Since 1913, the goal of U.S. monetary policy has been to create inflation, which devalues savings through interest rates that are below the rate of inflation and thus basically steal purchasing power.”

The Sound Money Defense League works on the federal and state level in a variety of ways to promote the investment potential of precious metals and clear a path toward the eventual readoption of the gold standard.

Before the Great Depression, the Federal Reserve was required to have enough gold to back 40% of U.S. currency. But bank failures during the Great Depression frightened the public into hoarding gold, making the policy untenable. Soon after taking office in 1933, President Roosevelt ordered all gold coins and gold certificates in denominations of more than $100 turned in for other money, abandoning the gold standard and making possession legal again only in 1975.

The Sound Money Defense League supports legislation calling for an audit of U.S. gold reserves famously held at Fort Knox along with a review of the Federal Reserve itself.

“At the state level, we also publish the Sound Money Index, which ranks and evaluates every state on its policies relating to precious metals and sound money,” Gleason said. Additional issues concern whether the states operate depositories for precious metals, whether they have laws that harass precious metals dealers and investors, and whether they invest in or hold precious metals in their pension and reserve funds. Wyoming, Texas, and Utah currently lead the index.

“We’re encouraging states to affirm that gold and silver are money as prescribed by Article 1, Section 10 of the U.S. Constitution,” Gleason said.

Individual investors don’t have to wait on the federal and state governments turn toward sound money, said Gleason. Instead, they can institute a personal gold standard for themselves by investing in monetary metals.

Money Metals Exchange and Gleason’s other businesses provide a vehicle for them to do that safely and economically.

The U.S.-based dealer buys and sells bullion, bars, and rounds in gold, silver, platinum, and palladium, but not in rare coins.

“We don’t think supposedly ‘rare,’ graded, or proof coins are a good way for people to get exposure to precious metals,” Gleason said. “They’re too subjective and not price transparent or cost efficient.”

The advantage of bullion, on the other hand, is that it’s typically close to the spot price of the metal. “So you’re buying the physical commodity, monetary metal, at the market price or near the market price,” Gleason said.

Most Exchange customers are in a position to take personal delivery of their metal. Still, when they aren’t, or when metals are held in IRAs where physical possession is prohibited, the Money Metals Depository can store their purchases.

These interrelated programs work together to support the reintegration of monetary metals into the U.S. currency system and a return to what Gleason calls “sound money.”

“Sound money is money that is stable in value, and doesn’t appreciate or depreciate arbitrarily,” he said. “That’s why gold and silver have been chosen as money throughout time — because they have been the most reliable stores of value and media of exchange.”

“What we have today is not sound money,” Gleason said. “We have money that’s deemed money by government decree, and that can be created or extinguished based on decisions by politicians as opposed to the market.”

The 2007-08 Great Recession and the COVID-19 pandemic is prompting investors and consumers to take another look at the sound money argument.

“That’s one of the reasons why we’re seeing so many people flock to precious metals today,” Gleason said. “They’re losing faith in institutions and worried about the banks and the economy. When people feel that way, they go to gold and silver.”

After keeping in mind to avoid highly marked-up rare coins in favor of bullion-based options at near the spot-metal price, the next step is to decide on a custody solution, Gleason said.

“I think everybody should at least have a little bit in their possession, but if you have larger amounts, then use a depository,” said Gleason. “Make sure you vet the depository so you’re comfortable.”

A savings plan that automatically transfers a set value in monetary metals into a depository can be a good idea. “Gold and silver have a low price correlation compared to other asset classes, so they’re a good diversifier,” Gleason said. “If you have a longer-term horizon, get more silver than gold because silver is currently extraordinarily undervalued versus gold on a historical basis.”

The current environment of high demand has resulted in a scarcity of the small coins, bars, and rounds that retail investors typically purchase, pushing up premiums. But large commercial bars are still widely available. The problem is that those assets are costly.

Money Metals Exchange has a solution in the form of vault gold and silver.

“They’re a storage-only option that allows you to buy much closer to the spot price because you’re taking a fractional interest in these large commercial bars,” Gleason said.

For anyone interested in a portfolio encompassing traditionally stable monetary metal assets, the infrastructure is there. Meanwhile, the Sound Money Defense League’s advocacy work continues as it empowers people to take control of their own financial lives.

“You don’t have to wait for the politicians to do something,” Gleason said.

20 Things You Didn't Know About Your Card