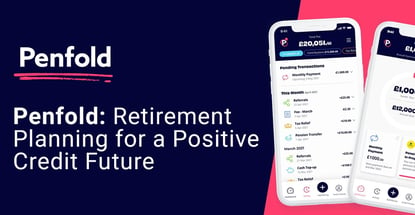 In a Nutshell: Many workers in the UK aren’t on track to have enough money saved for retirement, with as many as 20% not having any pension savings at all. The Penfold pension app encourages UK workers to plan for a comfortable retirement by using digital automation and flexibility to manage their pension. That can mean a more positive credit future for UK retirees because workers short on funds when they retire may find themselves resorting to high-cost credit products.

Shifting economic and lifestyle trends in the UK have contributed to a pension crisis. Not enough workers are saving money for a comfortable retirement, and as many as 20% of the UK workforce doesn’t have any pension savings at all.

Workers today also change jobs more frequently than they have in the past, so they may accrue multiple small pension pots that are difficult to manage individually. Others are self-employed for at least a portion of their work lives, and although they may have multiple income streams, none connect to an automatic pension plan.

Some of that pension hesitance may have to do with the traditional methods of managing plans. UK workers are highly receptive to modern mobile technology to manage their financial lives. But until Penfold arrived in the UK, there was no app on the market to untangle complicated pension management.

Penfold brings mobile convenience to pension plans and helps workers easily set themselves up for retirement, so they don’t find themselves in debt or burdened by credit overuse when the time comes.

The platform gathers all pension accounts in one interface so users can gain insights and learn new strategies to maximize their benefits and take the stress out of retirement planning.

“Everyone needs to plan for retirement,” said Kyle Chubb, Content Lead at Penfold. “What we’ve done is use modern technology to make it easy.”

Removing the Guesswork from Pension Planning

According to Chubb, UK consumers believe that the country’s pension administration is a relic of British bureaucracy, marred by jargon, busywork, and a thoroughly old-school approach. Perhaps most interesting about Penfold is how it makes using a modern app for pension management seem effortless and intuitive.

“The way traditional providers are set up, there’s no real transparency around how the pensions work and where they’re invested,” Chubb said. “Taking all the stress out of it makes people more likely to actively save.”

To start, users enter their personal and bank details and create a payment preference within the app. From there, they can select the right pension plan using the available compound interest calculator tool.

“There’s no minimum contribution for Penfold, and you can set it up in five minutes,” Chubb said. “Even if you’re only putting in £10 a month, at least you’re starting off, and once you’re more comfortable with it, you can scale up from there.”

Penfold’s Standard plan uses artificial intelligence to modify a diverse portfolio of holdings in response to market changes. The Sustainable plan does the same with companies that have high environmental, social, and governmental ratings as compared with. And the Shariah plan invests in Shariah-compliant companies.

The process of incorporating additional pensions is also easy with Penfold’s tool for tracking and transferring existing accounts. In situations where people have lost their account numbers and other details, Penfold’s tracking service works based on an employer name to find eligible accounts.

From there, pension funds may either be incorporated into the Penfold pension or administered separately.
“You can unearth pots you might have even forgotten you had,” Chubb said.

Due to the power of compound interest, the road to credit independence in later life is much easier when workers start pensions early. In fact, someone who opens a pension at age 20, contributes for 10 years, and then stops to wait for retirement at 60 will end up with a bigger pension pot than a person who starts at 30 and contributes the same amount every year until retirement.

Penfold can accommodate those scenarios, and many others, because there’s no minimum monthly contribution required. It’s also a fit for people whose income might vary from time to time.

Self-employed workers fall into that category, but it’s increasingly common in the UK for workers to experience income dips and surges, and seasonal interruptions. While Penfold accommodates automatic regular monthly contributions, it also allows auto-payments to be paused or easily changed.

The app also permits strategies like end-of-year top-offs to gain as much tax advantage as possible. Penfold brings the power and flexibility of a modern fintech platform to the world of pensions.

“Different people are going to have different needs, but Penfold works for you rather than the other way around,” Chubb said. “You should not have to jump through all sorts of hoops just to add some money to your pension.”

You don’t have to be a pension expert either. Penfold helps workers understand the positive impact of starting early and remaining engaged through its Pension Help Center and other educational resources available on the website and the app.

“There’s no such thing as a free lunch when it comes to investment products,” Chubb said. “But the longer you’re in the market, the better chance you have of seeing a positive return on your savings.”

Not much is certain about politics or the economy, especially in the short term. But history demonstrates that having a steady investment portfolio is the best way to build the kind of savings that can keep credit cards stowed away during retirement.

Penfold users between 18 and 39 years old will automatically receive the 25% bonus the UK government adds to personal pension contributions. A live chat is always available to answer user questions about any matter related to individual pension plans.

The Penfold team is ready to discuss with users the broader implications of pension planning to manage their credit use in later life.

“Our core mission is making sure people are ready for a comfortable retirement. Our approach is to provide as much information as possible so they can make the best decisions for themselves,” Chubb said. “We also recommend seeking the advice of an independent financial advisor.”

Penfold also involves users in charting the evolution of the product. For example, a group of long-time users organized on social media to answer user experience questions and test new products and features.

That group was instrumental in the recent introduction of a feature that shows users the individual companies their pensions are invested in and were able to vote at the company’s annual general meetings. It’s one more way Penfold keeps users engaged in building their own financial futures.

“Having your pension sorted out is a powerful way of taking care of retirement,” Chubb said. “Rather than leaving all these scattered bread crumbs behind you, Penfold can be right there with you as you go through your career.”