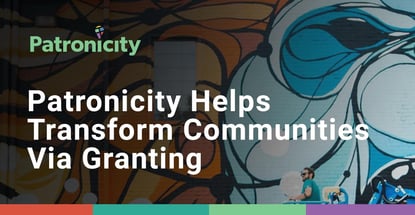 In a Nutshell: Patronicity is a crowdfunding platform dedicated to beautifying outdoor spaces in local communities. It provides a unique form of funding support that blends individual donations with matching government grants to ensure that projects are supported to completion. The platform also assigns coaches to each project so that there’s full support at every step of the way. Patronicity has recently started releasing resources and guidebooks to help inspire communities to develop vibrant spaces.

In every community, there are neglected public spaces that people either avoid or that have no appeal.

What has been seen time and again is that when public spaces are cleaned up and renovated, the transformative effect is immediate and can spread to other parts of the community as well. Soon the site becomes a place where children play, older generations socialize, and neighbors attend events. And it’s where people feel more connected to their communities.

But sometimes, getting adequate resources and funding for such projects can be an obstacle. And it’s hard to envision the potential outcome when dealing with spaces in disarray.

That is how Patronicity came into existence. Its President and Co-Founder, Ebrahim Varachia, was inspired by the Kickstarter funding model, and with the company’s other Co-Founder, Chris Blauvelt, began thinking about how to develop a crowdfunding platform for community development and beautification. With Patronicity, anyone can start a project.

“Oftentimes, the cornerstone between a great idea and it coming to life is the funding,” said Varachia.

“We thought, what if we could create this platform where people with great ideas to improve their community could come together and raise some funds from community members to see and inspire change,” said Varachia. “And everyday people could become patrons of the community, or patrons of their city. That’s where the name comes from.”

The company began in 2013 and has had a high success rate over the years. That’s partly thanks to matching government grants that often add to crowdfunding efforts to ensure projects reach completion.

When an approved and eligible project reaches its funding goal, the project receives a matching grant, which Patronicity has coined “crowdgranting.”

Patronicity provides funding for public community projects and to support small businesses with a much-needed infusion of cash. The public projects are, of course, tax-deductible.

“Any community project that we work with, that is run or administered by a nonprofit or municipality, which a majority of them are, are tax deductible. We primarily work on projects that are building vibrant communities. So that includes public spaces, community rehabilitation and community improvement,” said Varachia.

“Those are the two ways that we’re able to stay profitable, but also create opportunities for community and business improvement projects to flourish and thrive, and to gain access to funding that wasn’t there before,” said Varachia.

Another aspect that makes Patronicity unique is its coaching strategy. By assigning a coach to every project, it provides more support in ways other crowdfunding organizations do not. The coaches will not do the fundraising themselves, but they do help guide the project in the right direction.

“We’re kind of like a trainer in a gym. We’ll tell you what to do, but you got to put in the work. You got to lift the weights to see the results,” said Varachia.

To add more support, Patronicity plans to release a resource site of its work that will include blogs and articles, videos, case studies, guidebooks, and ways for communities to think about better projects for their spaces.

“Just sharing ideas, resources and opportunities from an educational or content side. That’s something we’re really excited to be bringing forth in the next quarter,” said Varachia.

As Patronicity’s founders were forming the company, they realized community development projects are funded by the public and by government grants, but often separately.

“We recognized there’s granting organizations, state agencies, foundations, nonprofits, and even corporations with corporate social responsibility dollars that are providing grants to community improvement projects,” said Varachia. “What if we could marry the two? What if we could double the dollars going toward these projects, by showcasing the community support that they have, when they’re able to raise their match from people by donating, they’ll receive a matching grant?”

“The beauty of the whole program is that it allowed for the community to become a part of the final review committee. It’s like pressing the “like” button on the projects you want to see in your neighborhood. But that “like” button is attached to a dollar sign. So it’s like voting with your credit card,” said Varachia.

One of the benefits of having government or foundation grants is that it reassures people that they aren’t the only ones putting their money in the pool. There’s a state agency or a foundation that’s also going to be checking in to make sure a mural or park renovation is going as planned.

It also incentivizes the projects to raise funds and meet fundraising goals so they can get that matching grant.

Patronicity has worked with a number of government agencies so far, notably the Michigan Economic Development Corporation and the Indiana Housing & Community Development Authority.

As stated in Patronicity’s 2021 Annual Report, 238 projects were launched from the crowdfunding platform, raising over $4.6 million in total. Over $3.3 million was distributed in matching funds thanks to grant matching partnerships.

The company also partners with corporate organizations that have social initiatives. “One of the biggest incentives is the transparency and the marketability. So all the time, when community members and stakeholders are contributing, the corporation’s name is attached to it,” said Varachia.

The Power of Transformative Donations

There’s no denying that beautifying community spaces leads to many positive effects. People feel better about their communities, it instills pride and raises home values in neighborhoods, and often leads to other community contributions.

One example of the great work Patronicity has helped bring about is a project in Marquette, Michigan.
The local community kids wanted to create an outdoor skate park. So they ran a 60-day crowdfunding campaign and toward the last couple days, they were about $5,000 short.

They were so close to meeting their goal, but had no idea how to raise more money.

“Four days left, all of a sudden, there was this large donation that came in for $4,000 or so. And I was like, “Who is this?” I looked up the donor name, and it was someone from California. And I was like, “How did someone in LA find this small town project in northern Michigan to support?” said Varachia.

It turned out that the mystery donor had grown up in Marquette and heard through a friend about the campaign.

“I think this is the beauty of crowdfunding and online accessibility, and anybody with a credit card can contribute.”

“He helped them get to that goal. And I think that was an incredible way to see how these kids were able to build the skate park that got the matching grants from the state of Michigan,” said Varachia.