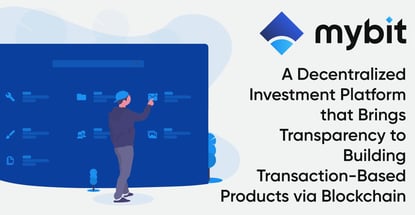 In a Nutshell: Tech investment opportunities have traditionally only been available through specialized funds managed by firms. But investor and crypto enthusiast Ian Worrall wanted to provide those opportunities to more people. So he founded MyBit, a decentralized investment ecosystem based on smart contracts and blockchain technology. MyBit enables direct and group investment in revenue-yielding IoT devices, while providing an exchange for buying, selling, and trading. Under its community-run governance system, MyBit empowers individuals to build the future of the blockchain-based investment market.

As an experienced investor, Ian Worrall was always looking for attractive alternative funds. He was an early investor in the cryptocurrency market, and he found what he believes to be the next big opportunity in the internet of things: automated technologies, machines, and the factories that build them.

But putting money into these promising technologies through traditional investment channels was more complicated than Ian believed it should be.

“The only way you can invest in those things is if you’re an accredited investor and go through a specialized hedge fund. It defeats the mentality behind crypto of not giving somebody else your money and paying fees to have them manage it,” he said.

In 2017, Ian realized there was a much more intuitive way to invest in automated technologies: smart contracts on the blockchain. Using smart contracts as the basis of trust and accountability, Ian and his team of industry veterans designed a decentralized, community-controlled investment ecosystem known as MyBit.

“We built a platform that lets you invest without going through a fund — or even a bank account. We plug the smart contract from Ethereum right into the technology,” said Ian, who is also the company’s CEO. “You can put your Ether into a share of a Bitcoin ATM or other robotic tech that generates constant revenue.”

MyBit has designed a four-part investment ecosystem consisting of the MyBit token, blockchain technology, an active community, and a decentralized governance model. The company envisions becoming a place for individuals to freely collaborate in creating, benefiting from, and investing in technology projects that will shape the future of the connected economy.

Innovative technologies often require seed funding to turn ideas into products, and that typically comes through venture capital. But with venture capital comes outside investors — a situation Ian wanted to bypass.

“For what we were building — a decentralized application — we didn’t want to have venture capitalists or activists as the shareholders to control it because it would defeat the whole point,” he said.

So, the company created its own source of monetization with the MyBit (MYB) token.

On most traditional investment platforms, transaction fees for products and services return to the company and go to paying back investors. In the MyBit ecosystem, a small portion of MyBit tokens are eliminated every time someone uses a service or product.

“Since the total supply of MyBit is constantly reducing, it rewards people who have it. And we don’t need to pull out revenue to pay back investors because it’s a decentralized structure,” Ian said.

Other companies that use this monetization model include Kyber, which MyBit looks to for its currency conversion technology.

“Right now in the crypto market, it’s as if you’d have to first buy McDonald’s tokens to buy something at McDonald’s. The user is saying this is a nightmare,” Ian said. “What Kyber is working on allows any token you own to automatically transfer into the token it needs to be. It works for person-to-person transactions, and it works on the application level, as well.”

With Kyber integrated into the MyBit platform, users don’t have to worry about where to buy MyBit tokens. They can spend the token they have, which automatically converts into MyBit and burns as it’s used in the application.

Using this monetization model allows MyBit to offer people a trustworthy, yet hassle-free, way to invest in new technologies and is laying the foundation for more consumer trust in cryptocurrency.

“As more projects adopt this, it makes tokens usable and gives them value. A lot of people are skeptical about tokens right now, but I’m fairly positive this is the way forward,” Ian said.

The core project for MyBit has been its decentralized investment platform, MyBit Go, which allows individuals to list and invest in devices that connect to the Internet and generate revenue. Ian said Bitcoin ATM is a good example.

“You can have 10 people that funded and own 10% of it. Every time someone uses the ATM and pays a transaction fee, it gets split among all the investors instantly, in real time. You get all your revenue back, and it never touches any human hands,” he said.

Users can also invest in other assets on MyBit Go, including Ethereum miners, smart co-working spaces, storage units, and even smart benches.

An accessible, collaborative investment structure was the initial vision for MyBit Go, but Ian and his team quickly realized it had the potential to act as a bond market for the crypto industry — something that’s been missing and sorely needed. During the bull run of 2017, crypto investors — Ian included — had difficulty finding a stable, yet profitable and liquid way to store their capital.

“If you want to keep your money close to crypto, your best bet is a stable coin, which is the equivalent of putting it in dollars. It’s good for getting out of the volatility, but it doesn’t generate any yield,” he said.

With MyBit Go, investors can store their Ether in a share of a Bitcoin ATM or other robotic — something relatively stable — while generating a much higher rate of return than a stable coin. When investors are ready to move their funds back into cryptocurrencies, these shares can be easily traded or sold through MyBit Go’s decentralized exchange plug-in, MYDAX.

Anyone can use MYDAX to quickly and securely buy, sell, or trade intellectual property, digital content and media, and non-fungible tokens — or turn assets such as real estate, luxuries, shares, and financial products into token form.

Both MyBit Go and MYDAX give investors the freedom to quickly and easily convert their capital and assets into the form that best suits the current market and their personal needs.

MyBit Go and MYDAX carry out Ian’s vision of creating more inclusive investment services, but he also intended MyBit to be an investment and development ecosystem run by users, for users.

So, after researching community-run models, MyBit converted its governance structure into a Decentralized Autonomous Organization, or DAO, in May 2019. Under the DAO, no single person makes company decisions or owns the company’s products. Instead, community members can propose policy changes or new features and then vote based on their MyBit token holdings. Decisions are carried out by curators, whom members vote in — or out — of leadership roles. In fact, Ian recently stepped down as CEO of MyBit after fully automating his role.

“Our vision is not us managing it anymore; it’s going to be the DAO and the community who have full control over the application and how it evolves,” Ian said.

Because MyBit is a DAO, the community can vote on policy changes based on their token holdings.

While it’s too early to tell how it will develop, Ian anticipates the DAO will parallel democratic governments in countries such as the U.S. “Being community-run is like a political system. We’re not going to have a direct democracy, where every person with a token is going to vote frequently. When the time comes to vote or make a difference, few show up. The structure will probably end up being most like delegated voting — you basically elect people to represent you and vote on your behalf.”

As for the impact on himself as CEO and the founding team, Ian sees the restructure as beneficial to everyone.

When MyBit Go launches, MyBit will become the first blockchain project ever to release a product that’s managed by a DAO. And while it might not make mainstream headlines, this marks a significant milestone for the decentralized financial ecosystem.

Putting Accessible Blockchain Investment Solutions into the Hands of Consumers

Ian set out to create an easier way to invest in technology by cutting out the broker and hedge fund gatekeepers. But with MyBit, he created much more. In addition to its investment platform and exchange, MyBit has developed many other solutions — first to address functional gaps for its own products and the crypto industry, as a whole.

“Products are just starting to be built on Ethereum. We had to fill in the gaps and spent a lot of time building out different payment protocols and things that nobody else has done yet,” he said. “But everything’s starting to piece together now. The industry is sitting on a good base layer, and over the next few years, the amount of development and products is going to be huge.”

Ian Worrall founded MyBit to help users invest in the latest tech innovations without going through a hedge fund or firm.

Ian anticipates that blockchain-based investments will start replacing — rather than integrating with — traditional options over the next decade.

“I think the new blockchain technology will start becoming an alternative to banks. People will just diversify their portfolio between blockchain-based assets and traditional ones,” Ian said. “But blockchain is going to play a bigger role because it just makes sense — it’s more efficient and more secure.”

In the U.S., where the currency and banking system is stable and trustworthy, adoption of crypto investment alternatives has been slower than in other areas of the global financial market, but Ian said that even this will change in the coming years — and the most significant factor will be user-friendliness.

With that in mind, the MyBit ecosystem and its community model is setting the pace.

“We’ll be one of the first projects to release actual products regular people can use,” Ian said. “I see a lot of crypto projects headed this way — making things open-source and giving things away for the betterment of the world. There are still financial rewards for it. It’s just a different economic structure.”