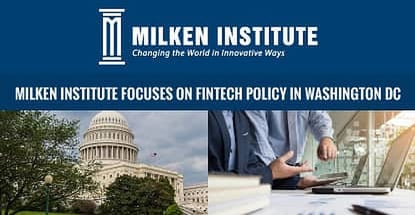 In a Nutshell: Advances in FinTech have increased industry profits from $3 billion in 2012 to more than $40 billion in 2016. But the industry’s rapid growth and development seems to have caught Washington, DC, regulators and policymakers off guard, as new technologies pose challenges to existing regulatory and policy frameworks. Legislative and regulatory developments in the FinTech space have been followed closely since 2014 by the Milken Institute’s Center for Financial Markets in Washington, DC. The nonprofit think tank provides in-depth research and analysis on FinTech developments, and identifies ways where technology can be used to address financially underserved businesses and consumers worldwide. //

For as long as currency has existed, finding ways to make it easier to carry and use money has occupied the minds of those in the world of finance.

The introduction of coins led to the invention of pockets on pants. Money clips for paper cash gave way to the wallet when consumers began carrying more credit cards. Women’s purses have grown larger to include more pockets than a pool table.

The first example of Financial Technology (or FinTech) was introduced in 1865. The pantelegraph was invented by Giovanni Caselli to verify signatures in banking transactions between Paris and Lyon, France. Within 100 years of its introduction, Barclays Bank’s European customers used the first ATM to conduct bank transactions.

Those advances may seem small compared to modern technology, but, in today’s push toward a cashless society, efforts to develop tools that help consumers store, spend, and transfer money without carrying it around continue.

Silicon Valley’s move into financial services has completely changed the way consumers interact with their bank and brokerage accounts, and handle other investments. As new technology becomes more commonplace, Washington DC has been slow to respond in setting flexible policy and regulatory frameworks that address the rapid pace of innovations affecting the traditional financial services sector.

FinTech, after all, is no longer just for banks. As Jackson Mueller said, “There are all sorts of sub-sectors to FinTech. It’s not just lending or payments. There’s InsurTech, there’s RemTech for remittances. There are so many technologies out there playing a role in the financial services space.”

Jackson is the Associate Director of the Center for Financial Markets at the Milken Institute in Washington DC. The FinTech arm of the nonprofit has dedicated countless hours since 2014 to monitoring Washington policymakers’ and regulators’ approaches to financial technology.

“We like to think of ourselves as one of the first think tanks to really enter the space in the Washington DC area,” Jackson said. “When we started, FinTech wasn’t a household name in DC. A year later, everybody was talking about it and wanted to know what was going on.”

What’s going on today is a technological revolution that skyrocketed from a $3 billion-per-year industry to $40 billion annually in less than five years. In that time, financial service providers developed mobile wallets, payment apps, robo-advisors for wealth and retirement planning, alternative investment options, and online lending platforms that give consumers and business owners greater access to capital.

FinTech – An Evolving Term that’s Only Getting Broader

When the Milken Institute began tracking FinTech in 2014, online payment applications and lenders dominated the space. Today, the think tank has expanded its focus on the technology’s ability to improve access to capital and financial inclusion, and enable greater transparency and compliance among institutional stakeholders and regulators in assessing risks and ensuring accuracy in reporting obligations.

Consumer demand for new FinTech options leads to new innovations in the space and researchers at the Milken Institute are examining how these technological advances can help developing countries improve their financial infrastructure.

“They learn about the regulations and other frameworks here in the US with the hopes that they bring this knowledge back to their own countries to either enhance their own capital markets or to lay the foundation for capital market development,” Jackson said.

The nonprofit also holds annual summits in London, Singapore, and Los Angeles, as well as specialized programs like the Future of Health Summit held in 2017.

Jackson Mueller, Associate Director of the Center for Financial Markets at the Milken Institute

In addition, Jackson said one of the Institute’s most important ways to spark change, though, is through its ability to connect leaders with diverse points of view in both public meetings and private roundtable sessions.

“We bring together industry regulators, stakeholders, policymakers, academics, lawyers, and others from the ever-growing number of people involved in this space,” he said. “We come to the table to discuss what we’re seeing out there and what’s really going on.”

He said the meetings give the collection of experts and professionals a chance to create a game plan on how to address and adjust to government policy being made in the FinTech space.

“The meetings get people to discuss the various opportunities and challenges related to the sub-sectors,” he said.

As the engagements grow and discussions shift to emerging technologies and how each can improve the lives of consumers worldwide, Jackson said the group’s focus has changed.

“Over the last three years, we’ve been focused on the ‘who’ and the ‘what’ of what’s out there,” he said. “Now what we’re more interested in is the ‘how’ question. How are you making a difference or an impact out there?”

Of the many initiatives the Milken Institute works on each year, Jackson said the Partnership for Lending in Underserved Markets cooperative with the US Small Business Administration is nearest to his heart.

The two-year initiative is designed to derive actionable solutions to enhance access to capital in underserved small-business markets in Baltimore and Los Angeles. From a FinTech lens, the Institute is interested in exploring how the use of non-traditional data can be incorporated into current credit underwriting models to provide a potentially more accurate assessment in regards to the creditworthiness of a minority-owned small business, in particular.

“We look at how these lenders can help provide credit to a number of these primarily minority-owned small businesses that have been shut out of the traditional banking space,” Jackson said.

More than 2 million small and micro businesses — around 8,000 a day — were denied credit in 2011. A later study found that nearly two-thirds of those businesses were creditworthy under traditional lending standards.

The cost for a traditional bank to underwrite a $100,000 loan is the same as for a $1 million loan. A small business loan for $15,000 is not economical for banks and harder to push into underwriting. The partnership focuses on helping SMB owners improve their odds of credit approval through research and education into alternative methods of online lending.

“We are very interested in determining the overall importance of alternative data in deriving a more accurate credit assessment of the small business on Main Street,” Jackson said.

Researching and Supporting FinTech Since 2014

Meanwhile, in Washington DC, regulators and policymakers struggle to keep up with the rapid pace of change. and have yet to place strict guidelines on who can provide financial products to the masses. The Milken Institute has led the district’s FinTech research since 2014 through in-depth analysis and multiple engagements in understanding the various players out there and how advanced technologies can be leveraged to create a more responsive global financial system.

Regularly published research and findings keep Americans informed on FinTech policy being discussed in Washington, with a focus on how that policy will affect the future of the financial services industry.

And that future technology is sure to grow over time into applications and services that seem inconceivable today. As with the use of charge plates and credit coins in the late 1800s, FinTech is all about leveraging advancements in technology, including the internet and mobile technology, to address certain pain points in the current financial services system, creating a more innovative and responsive 21st-century financial services industry.